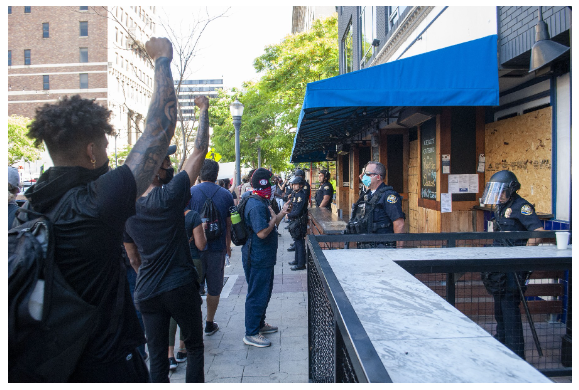 A peaceful protest with a passionate plea.

That was the scene for nearly 3 hours Sunday afternoon in downtown Long Beach as protesters flooded the streets in response to the murder of George Floyd in Minneapolis last week.

Sixty years after the marches of the civil rights movement, and thirty years after the LA riots in response to the brutality committed against Rodney King, protesters held signs and participated in chants as they marched. The years have continued to roll by but black people in America are still fighting to be treated with basic humanity.

From the start at the intersection at Broadway and Long Beach Boulevard around 3 in the afternoon, until well after 5, a group of citizens thousands strong marched peacefully without interaction with police or unruly behavior from protestors.

The story of this protest is the story of two young black women pointing at bystanders who were taking pictures or videos and yelling, “this is a movement, not a moment. Get out here and walk with us.”

The story of this protest is the story of a middle-aged black man who stopped as the march went past a group of police officers and turned to engage a white cop in conversation. From a respectful distance the man asked for a simple favor, “just talk to me.” His request was met with silence.

The story of this protest is the story of people traveling through the crowd in abundance providing snacks, water and first aid to protestors. People of all races following black leaders in a peaceful demonstration of justifiable rage and fed up-ness.

People walked slowly and mindfully, many hand-in-hand with friends and loved ones. There was no pushing or shoving, no blood nor broken windows. It was a movement of Long Beach residents, largely young and largely people of color and entirely peaceful.

However, those are not the stories that are shared by many media outlets. The stories being blasted across US television and phone screens are the stories of people who are not part of the meaningful protests.

The angle the media portrays takes away from the message and clouds the headlines. It is clear in Long Beach, and most likely across the nation that the people vandalizing, stealing and burning are not the same people who marched, and chanted and pleaded.

The videos from Long Beach shared by mainstream media show groups of people smashing shop windows and making out with arms full of clothes, and other items. All in an area of downtown a couple blocks removed from where the majority of the peaceful protesters were marching. These people are not the protesters.

The videos shared on Twitter from around the country show people burning businesses, flipping cars, and smashing windows. These people are often white, many covered head- to-toe in dark clothing worn intentionally to hide their identity. Their intent was not to protest, but to vandalize and riot. These people are not the protesters.

The story of each day has focused on the destruction from the night before. Powerful voices from politicians to CEOs condemn the “violent riots” while playing up a narrative that the aggressors of the violence are black protesters when in reality there has been police filmed contributing to the rioting and property destruction.

The story the media is portraying is not the story of the protests sparked by the murder of George Floyd, but the story of America in its rawest form. A nation built on racism and driven by anger, injustice, inequality, and greed.

By highlighting the violence and destruction, the media is pandering to people in power who want to be able to react to these protests with aggression and suppression.

There are simple and easy ways for the people in power to write-off and deal with violence and riots. We have already seen it take place. If the people are being violent, then the power structure will respond with violence. It gives them an easy way out.

The ability of the oppressed to organize and to stay calm in the face of their pain and anger, a peaceful protest, or a simple request for a conversation, that is what really scares them.

People in power would rather see the country burn than allow for the thought, let alone the dream, of true change to flourish in the average citizen. Just as they assassinated MLK when he stoked the fires of change, they again aim to assassinate the entire Black Lives Matter movement through media manipulation and ultimately violent oppression.

In speaking to protestors from previous generations, it is clear that this pattern has been part of media coverage of social change for decades.

One thought on “What You Won’t See”