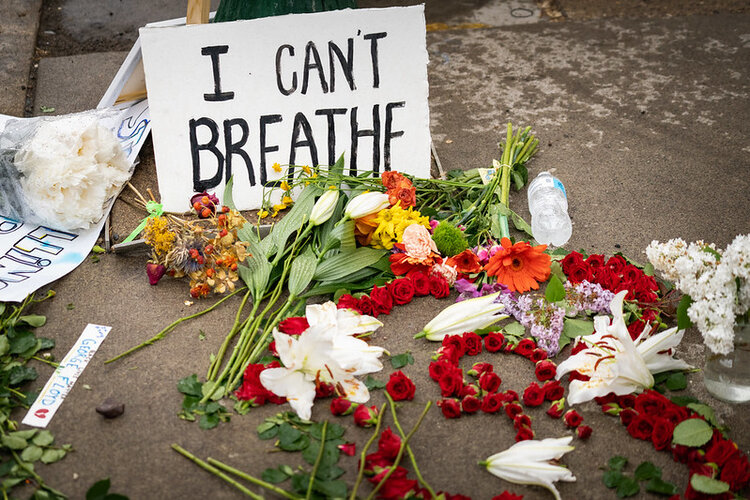 A memorial for George Floyd in South Minneapolis.

Ever since large numbers of people spontaneously took to the streets in wake of the police murder of George Floyd, large sections of the media have focused on the destruction of windows and in some cases actual looting of stores, and media pundits have agonized over the alleged tendency of “the Left” to be wedded to “violence.” Now the NY Times says that the looting in Wisconsin in response to the cold blooded shooting of yet another African American by police may be scaring suburban voters back into support for Trump’s camp just before the election.

I share the following story to provide a context that must be taken seriously as we assess what is happening in our streets. I was indicted in 1970 as part of what became known as “the Seattle Seven Conspiracy Trial,” after an anti-war and anti-racism demonstration turned chaotic when dozens of police attacked the demonstrators with clubs and tear gas.

The demonstration took place a few days after the close of a more famous trial of “the Chicago Seven.” While the jury in the Chicago trial was out (and would return a verdict of “not guilty”) the judge cited all the defendants for contempt of court and sentenced them to prison. I was a visiting  Assistant Professor of Philosophy and had founded an organization that we named the Seattle Liberation Front to challenge militarism, racism, inequality, and many other perversions of what we believed to be American ideals. We felt the need for a new organization because the most popular youth anti-war organization, Students for a Democratic Society (SDS), had been taken over by the violence-exalting Weatherman organization, that had a few months before taken over the national office of the SDS and had declared the SDS dissolved.

We sent letters to the judges at Seattle’s Federal Courthouse and to other public officials declaring that we would be coming to the courthouse to conduct a “teach-in” to the judges on the ways that the Nixon White House was using the courts as a political instrument to undermine the freedom to express dissent and petition our government to stop the war in Vietnam, and release Bobby Seale, the national chair of the Black Panther movement who had been tied up and gagged during the Chicago trial.

When we arrived for the teach-in, the doors of the courthouse had been locked and we had no alternative plan. After forming small groups to decide what to do next, the police arrived and began assaulting over 2000 demonstrators. At that point, some protestors fought back, some threw paint on the courthouse, and others threw rocks breaking some windows. Most started a spontaneous march chanting anti-war and anti-racism slogans. The police followed them, throwing tear gas. Within two hours, many of the downtown offices had been closed because the teargas made work impossible. A handful of demonstrators broke windows of downtown stores.

The media asked me to comment on the demonstrators’ violence. I made two points: 1. I regretted the destruction of property but pointed out that the U.S. government that very day was killing hundreds of Vietnamese and destroying far more property than the windows of a handful of stores, and 2. The word “violence” was only appropriate when used to describe acts that caused sentient creatures (animals and human beings) pain and/or bodily injury. It was only in capitalist societies that cared more about property than about people that this term was now being used against those of us who were trying to stop U.S. violence against people of color in Vietnam and in America’s ghettos. (I should have added and against animals.)

The next night, at a meeting of the activists, a tall young man in perfect hippy attire stood up and shouted in outraged tones: “who gave professor Lerner the right to apologize for what we did yesterday? We should have done more damage to those stores and to cars—they are all owned by people with white skin privilege.” At the trial, he was revealed as one of the many undercover agents who had infiltrated our organization (our meetings were publicly advertised).

We were charged with conspiracy to destroy federal property (the courthouse) and using the facilities of interstate commerce with the intent to incite riots. The most dramatic moment of the trial came when another witness for the prosecution, a young man who had volunteered out of patriotism and hatred of the Left, testified under cross examination that the paint that had been thrown at the courthouse had been paid for by the FBI and that he, working with the FBI, had brought the rocks to the courthouse the night before (because there were no rocks in downtown Seattle). In response, many members of the jury gasped loudly. The government’s “conspiracy” case had totally fallen apart. The prosecutor asked for a postponement for a day,  using the excuse that the next defendants arrived late to court, the judge declared a mistrial and held us in contempt of court. Another defendant and I were sent to Terminal Island Federal Penitentiary 1000 miles away,  and when the 9th Circuit ordered the judge to release us, he publicly refused their order, President Nixon called him publicly to congratulate him for standing up to the “notoriously liberal” judges (presidential lawlessness was not invented by President Trump).  We were in prison many weeks before the 9th Circuit ordered the prison to release us for at least for a week so that we could appear at the appeal hearing overturned the contempt conviction.

So when I hear radio or television claims that the anti-racist, environmentalist, and pro-economic justice demonstrators are violent extremists (and demonstrators pointing out that the destruction of property was mostly done by others who were not really part of their demonstrations), I wonder why the media focused so much on the few lawless among the hundreds of thousands around the country who took to the streets. I have witnessed agitators sometimes succeed in recruiting sincere anti-racist demonstrators into acts of property damage, and I’m aware that some people living in or near poverty will “loot” when given a chance, perhaps the only way one they can slightly redress the wild inequalities of wealth they face, hoping to sell some of what they looted and not even imagining that in so doing they are giving credibility to those who want to dismiss the larger anti-racist and pro-justice causes that brought so many people to the streets. Yet, as I learned as a defendant in Seattle, it is a huge mistake to underestimate the conscious and illegal behavior of some police, undercover government agents, and, as in Portland, overt and transparent agenda of the Trump administration to incite a new civil war by inciting violence and the destruction of property, which sections of the media falsely identify as the doings of the demonstrators for justice and an end to racism.

We spiritual progressives should do all we can to stop the looting. It is wrong because it causes damage to Americans (white and Black) who have not been the source of American racism. And it has a destructive impact politically, pushing people into the arms of the racist police forces and racist politicians who, using the promise of "law and order," win people whose interests would be better served by progressive policies. Looting is a gift to right-wing extremists and detrimental to the struggle against racism--which is precisely why right-wing politicians are making looting a central part of their fear-mongering strategy in American politics in the months before the 2020 elections.

One thought on “From Buzzflash: What and Whose Violence? My Personal Experience”