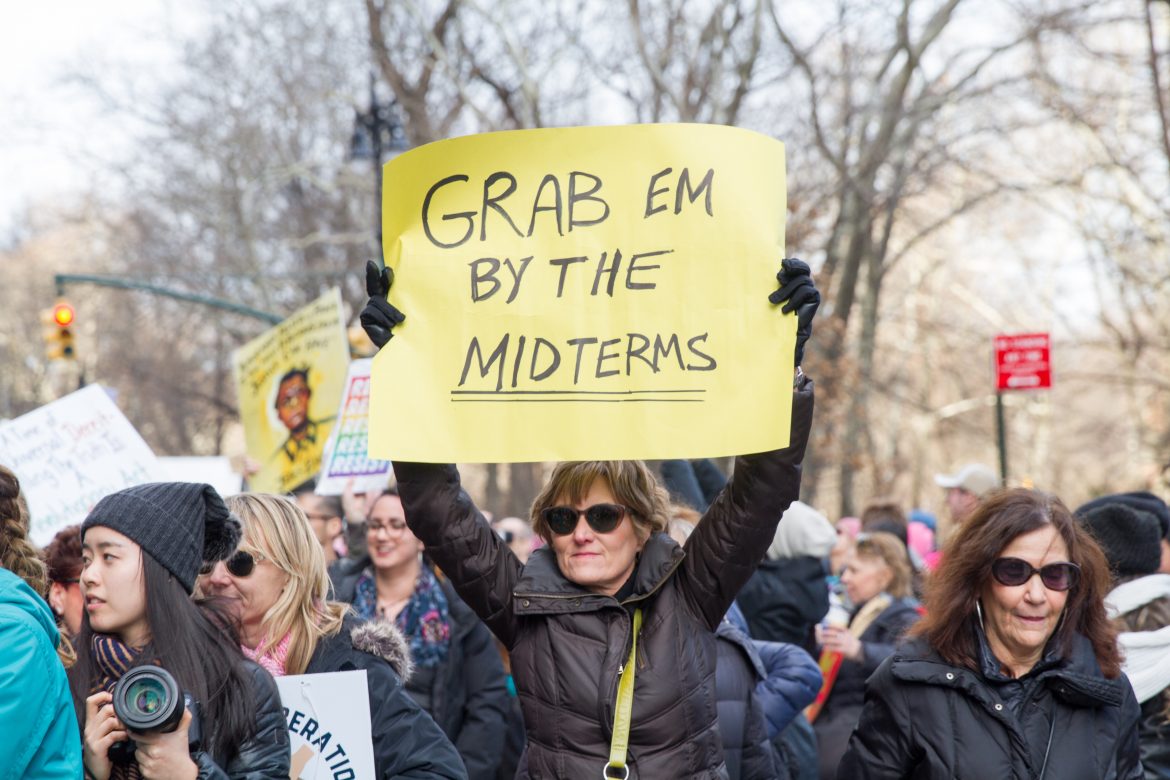 Two years ago, on January 18, 2017, nearly a hundred people crowded into the library meeting room in Huntington Woods, our small suburb north of Detroit. Our turnout at this first gathering of the local resistance to President Donald Trump shocked those of us who organized it, the Huntington Woods Peace, Citizenship and Education Project, as did the participants’ eagerness to get to work. The meeting was started by viewing a cartoon by artist Gustavo Vilsenier that showed the Obamas getting ready to leave the White House, then turning off the lights, and then all of America went dark. But while this may have been the post-election mood of many of our friends overseas (Vilsenier is an Israeli), this crowd became restless at the Chair’s presentation and immediately asked to form into Indivisible groups. All of us knew about actions taking place, including the Women’s March scheduled for the day after Trump’s inauguration. Already in November, only three days after the election, some of us happened on and were drawn into a march of young people in a nearby town protesting against an anti-immigrant incident in their middle school school obviously spurred by Trump’s election. Now, with Trump about to be inaugurated, we wanted to talk about Indivisible, a guide to action put together by former Democratic Congressional staffers.

Usually most hype about how terrible our lives are going to be if this or that candidate is elected turns out to not be true. But now, the ugliness of Trump’s election campaign, his unapologetic misogyny, his extreme right-wing cabinet choices drawn from the worst elements of the capitalist class, his campaign against Mexicans and Muslims, his promises and threats—all suggested that a storm was coming, and our fears were not exaggerated. In his first week in office, Trump issued the Travel Ban, and tens of thousands joined spontaneous demonstrations, including at airports. Trump clearly was out to shake things up, but we were ready to respond.

We have been doing battle for two years now in Oakland County, Michigan, among us people who were never active before and people who have been active for over fifty years. We have been making phone calls; sending out emails; going to demonstrations and trainings; visiting Congresspeople (or more likely, their staffers); collecting signatures for the anti-gerrymandering initiative Voters Not Politicians; reading some of the countless articles and books explaining Trump; trying ourselves to figure out Trumpism by participating in study groups; educating ourselves about how the political system works; learning about climate change, the budget, and Obamacare; attending Democratic Party meetings; doing all this together and meeting new people in the process. Some of us went to Washington for the Women’s March, many more to the march in Lansing, nearly all have gone to local vigils and demonstrations in another small suburb, Ferndale. The Huntington Woods Peace, Citizenship and Education Project has been presenting regular meetings on the theme of “Trump versus”—The First Amendment, Science, Obamacare, Immigrants, the Environment, Obamacare, etc. And while this was going on MeToo created itself, becoming a current underlying everything, bringing out huge numbers of women who are energizing and leading so much of this.

Trump has pushed and we have pushed back. At our meeting to mark the two-year anniversary we asked ourselves what we feel we have accomplished. First, We are a movement, one of the largest in the history of the United States. We’re in Oakland County, Michigan and we are all over the country. It is remarkable because it is many grass-roots movements, decentralized, with no single leader or organization. Second, this movement generated the Blue Wave of 2018. Two years ago we imagined turning the House of Representatives around, and it happened. Just that fact is momentous. Just how momentous we can see in the slate of women leading Michigan’s government. Or in passing two initiatives on last November 6 that brought about more democratic government in Michigan by defeating gerrymandering and expanding voting rights. Elsewhere, Orange County, California, the center of the religious right that dominated so much of American politics for thirty years, is now solidly blue. Texas, Florida, and Georgia are in our sights.

Much of this wave has a progressive cast: Our Revolution, the Women’s March, Democratic Autopsy, Progressive Dems, Indivisible 2.0, Democratic Socialists of America. We remember how, two years ago, Indivisible advised us to just say No to Trump and to avoid any disagreements among ourselves by proposing progressive legislation. That exact issue came up at our local meeting about the Affordable Care Act: don’t demand Universal Health Care, protect Obamacare, save expanding it for later. Unexpectedly, a strongly progressive current has been bubbling up from our movement. Over half of Democrats now regard themselves as “liberal”; progressives in the national party have broken the control of appointed super-delegates over the presidential nomination process. Prospective  candidates are calling for “Medicare for All,” free college tuition, and a minimum wage of $15/hr. it turns out that Bernie Sanders was not an outlier, but the beginning of a wave. The new star of American politics is another open socialist Alexandria Ocasio-Cortez, joined in Congress by Rashida Tliab. It has become “cool” and mainstream to talk about socialism, even if exactly what that means still needs lots of discussion. Old radicals among us are having the remarkable experience of a lifetime: seeing our ideas becoming mainstream.

Also entering into the mainstream as a result of the results of 2016 and 2018 are critiques of the undemocratic structure of national politics—specifically the Senate and the Electoral College. Against the majority will, these gave Trump the 2016 election and the Republicans the Senate in 2018. More and more of us are talking about this, and after the Blue Wave we no longer can think that change is impossible. Accordingly, on the first day of the 116th Congress Representative Steve Cohen of Tennessee introduced a constitutional amendment to abolish the Electoral College.

What have we learned in this process? The fifty of us who gathered in our community to commemorate the beginning of the Resistance have a very different mood than two years ago. Two years ago we were angry, frightened, apprehensive about what was going to happen but determined to do something, somehow to stop Trump. None of us had ever experienced the kind of movement we became. We could imagine turning around Congress, but imagine only.  Steve Cohen’s proposed Constitutional amendment, AOC’s idea for a 70% income tax rate, talk of a “Green New Deal,” all say something about our mood today.  We gathered and organized and fought–and helped protect Obamacare, won the House of Representatives, have a new government in Michigan. Because of improved access to the ballot in Michigan and an end to gerrymandering, we can look ahead to winning the State House of Representatives and State Senate. There is a different kind of energy among us now, and in the country. We are ready not simply to oppose Trump but to pose new goals. We are able to think ahead and talk about what we do want.

[Editor’s note: Happily, that is the very reason I’ve written my next book, to be published in the Fall 2019 by the University of California Press, entitled The Revolutionary Possibility of Love: a political manifesto to heal and transform the world. Can your local bookstore host me to speak about “what we are for, not just what we are against”–if so, please let me know so that we can set up a book tour: rabbilerner.tikkun@gmail.com.]

Ronald Aronson’s most recent book is We: Reviving Social Hope. He has written both on Camus (Camus and Sartre: The Story of a Friendship and the Quarrel That Ended It) and on Trump (“The Relevance of Hope Under Trump,” The Nation; “Solid Trumpism,” Boston Review). He is a Tikkun Institute Fellow and Contributing Editor to Tikkun.

One thought on “Two Years Later: Resisting Trump in Michigan”