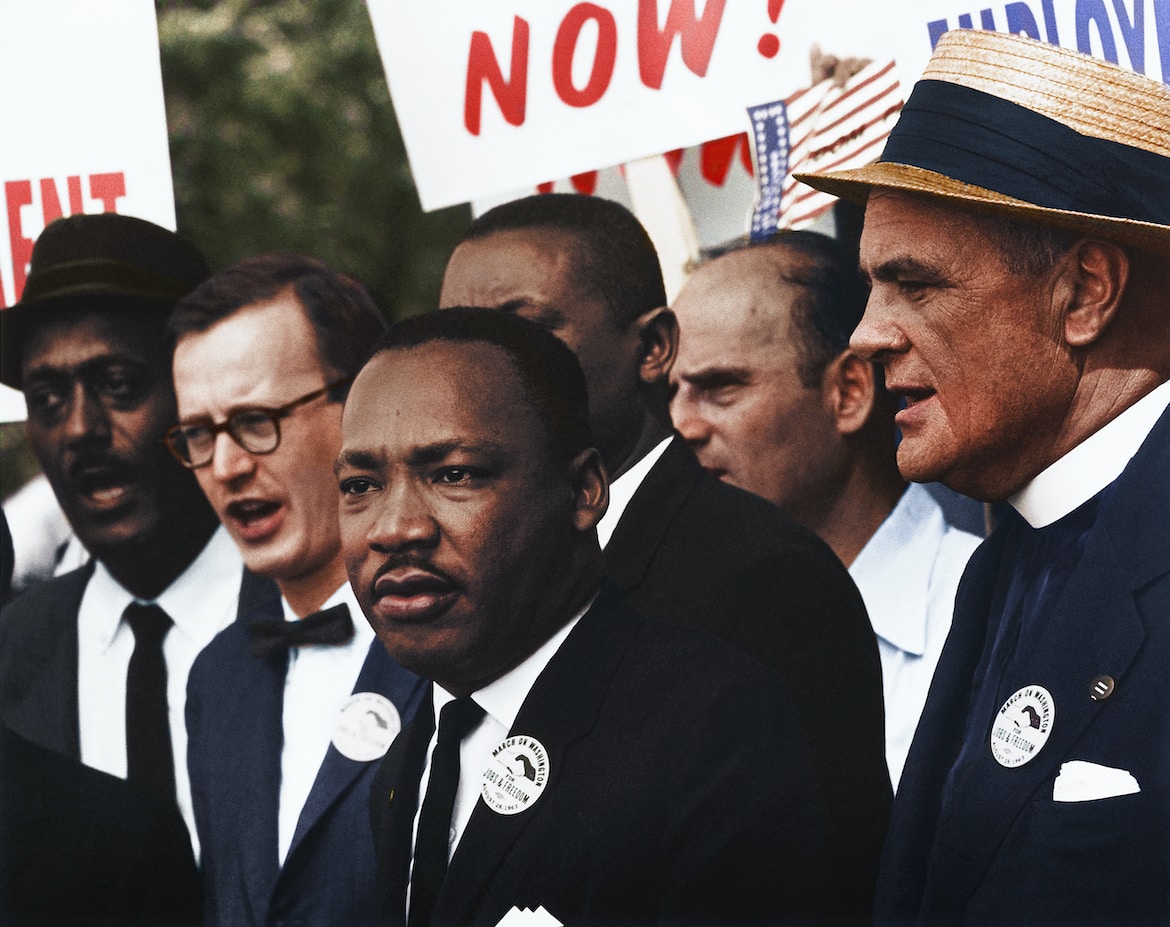 Photo by Unseen Histories on Unsplash

I was hugely honored in 2005 when Morehouse College invited me to receive their MLK, Jr./Gandhi annual award, and arranged for me to give a sermon at the Ebenezer Baptist Church in Atlanta where King did much of his preaching. I had become radicalized after attending King’s “March on Washington” in 1963, and it had been my solidarity with the civil rights movement that soon led me to identify also with the human rights of the Vietnamese people being slaughtered by America’s imperial intervention attempting to quash their own struggle for freedom. I had the honor to meet with King just before he was murdered in 1968, and shared the grief and outrage of so many Americans.

While subsequent movements took that grief and outrage in a new direction, blaming all white people as racist and benefiting from “white skin privilege,” this was actually the opposite of what King preached. King's famous “I have a dream” speech warned:

Let us not seek to satisfy our thirst for freedom by drinking from the cup of bitterness and hatred…The marvelous new militancy which has engulfed the Negro community must not lead us to a distrust of all white people, for many of our white brothers, as evidenced by their presence here today, have come to realize that their destiny is tied up with our destiny and they have come to realize that their freedom is inextricably bound to our freedom. We cannot walk alone.

I have a dream that my four little children will one day live in a nation where they will not be judged by the color of their skin but by the content of their character. I have a dream today.

That one day down in Alabama little black boys and black girls will be able to join hands with little white boys and white girls as sisters and brothers. I have a dream today.

There is not a sign of putting down all whites because of their skin color, but of embracing as brothers, sisters, and allies all people who wish to be part of the struggle to end racism. In later talks, King talked about love as a central foundation for this movement.

And there is another element of why King became the most beloved social change activist of the U.S. in the 2nd half of the 20th century: his unequivocal commitment to nonviolence and to framing his movement within the ethical discourse of the Jewish prophets, so that the social justice movement could speak equally to those who were moved by their own religious beliefs as well as for those of us who were moved primarily by a language of human rights.

So after he was murdered, the primary energy of the Civil Rights movement became focused on winning legal rights in the courts, not in mass movements in the streets. Yet the courts to which it appealed required legal arguments, not ethical or religious or love-oriented arguments. Eventually, the demonstrations in the streets were replaced with victories in the courts. But such victories became a weak foundation for retaining the rights that had been won. And without a movement that spoke to the hearts of Americans, but instead were heard by many as speaking in a disrespectful language toward their religion and a legalistic movement that depended on lawyers more than on prophets, the energy began to drain. So when Reagan, Bush senior, and Bush junior became U.S. presidents, they were able to appoint to the Supreme Court (sadly with the support of many Senate liberals) justices whose values were more attuned to those who hated the left and the remnants of civil rights. And this eventually led to the dismantling of the key parts of the Voting Rights Act that had been at the center of what the good guy lawyers had won. When that happened, there was little reaction in the streets. It would take the accelerated murders of African Americans to produce a “Black Lives Matter” movement in the streets to refocus the country on racism, but then primarily on violence against individual Blacks rather than about dismantling the institutions and economic structures of capitalism (with its focus on maximizing money and power) that had been the focus of MLK Jr.’s last year.

The way to honor MLK Jr. is for a movement to arise that speaks a language of love, generosity, and kindness, that uses the language of caring for everyone and caring for the planet, and that talks about every human being as created in the image of God and deserving to be treated as an embodiment of the sacred. No—you don’t have to be religious or believe in God to be part of such a movement, but you do have to welcome people who are moved by that kind of framing, and we do need a movement that rejects language that seems to demean all whites and all men as privileged. Instead, this movement will focus on how much everyone loses in a racist and sexist society.  Yes, of course we must protect people of color from racist police, and racist treatment in their economic lives and in human interactions. But we can only expect to win when we move from the language of hate to the language of love and caring. In my book Revolutionary Love, I describe in detail what this means. It does not mean failing to confront the racism, sexism, homophobia, anti-Semitism, etc. of right wing extremists or cuddling up to America’s ruling elites who have been momentarily moving away from the Trumpists who sought a coup by taking over the Capitol and refusing to allow Biden to become President. We should wish Biden well, but he will not lead a movement that elicits the support that MLK Jr garnered unless he becomes more like MLK Jr.

So this is my message: if you want to honor MLK Jr. then Be MLK Jr. Embody his message and embrace his honoring of the other, nonviolent, love-oriented discourse and you will see how miracles start to happen.

--Rabbi Michael Lerner is editor of Tikkun, chair of the interfaith and secular-humanist-welcoming Network of Spiritual Progressives, rabbi of Beyt Tikkun synagogue-without-walls in Berkeley Ca. and author of 12 books including (with Cornel West) Jews and Blacks: A Dialogue on Race, Religion, and Culture in America.

Tikkun needs your support to bring the kind of analyses and information we provide.
Click Here to make a tax-deductible contribution.
More