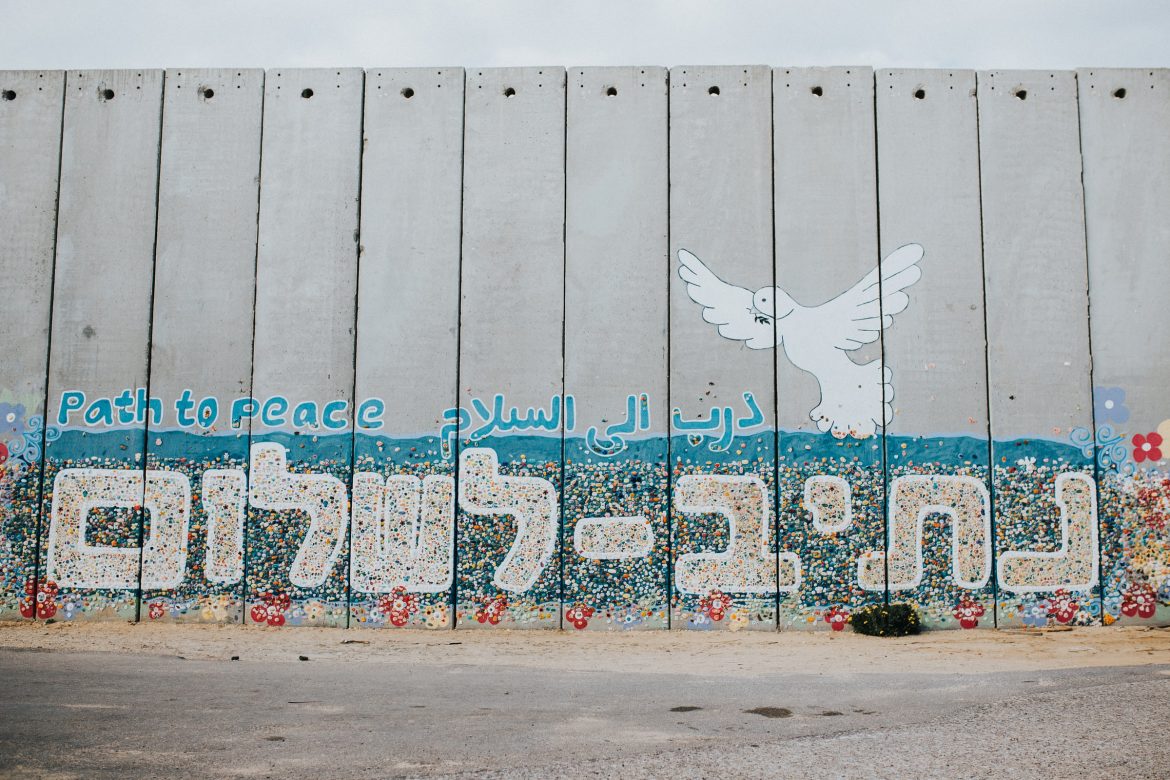 In the still heat of mid-summer, despair and hope vie in the shimmering haze. It is a season of struggle in the world around us and in the cycle of Torah and Jewish liturgical time. For three weeks before Tisha B'Av, day of mourning and fasting for the destruction of both Temples in Jerusalem, we chant prophetic words of warning. For  seven weeks after Tisha B'Av, we chant prophetic words of comfort. We try to hold both as we make our way in a world convulsed by the pandemics of a virus, of racism, of so much brutality among people and nations, all separating us from each other when we most need each other. In the Torah portions from the end of the Book of Numbers, Sefer Bamidbar, into the beginning of the Book of Deuteronomy, Sefer D'varim, we encounter the violence of conquest, painfully brutal passages among those that Rabbi Abraham Joshua Heschel describes so helpfully as the "harsh passages." Learning to navigate the harsh passages of Torah, we gain training and skills in the way of confronting violence in the world around us, while learning through sacred confrontation the ways of nonviolence.

I would not presume to say that it is the Torah's explicit intent that in our encounter with its own violence we are to wrestle and struggle toward another way, toward transcending and transforming such violence. In the Jewish way of engagement with text, wrestling, crying, arguing, that dynamic becomes so inevitable, however, that we cannot miss it as implicit intent. In the way of a quiet plea, as hearing God in the "still, small voice" (I Kings 19:12), implicit becomes more powerful than explicit. On the mystery of its opening words, given human voice through Rashi and rabbinic tradition, the Torah says, dorsheni/interpret me, search me. And so we do. That the harsh passages do not represent the ultimate concerns and lasting values of Torah, in the way that Rabbenu Heschel teaches, is clear: "the standards by which those passages are criticized are impressed upon us by the Bible, which is the main factor in ennobling our conscience and in endowing us with the sensitivity that rebels agains all cruelty...; [the harsh passages] stand in sharp contrast with the compassion, justice and wisdom of the laws that were legislated for all times" (God in Search of Man, p. 268). The values with which we confront the violence are from yet deeper wellsprings within the Torah itself, page and parchment the context in which human struggles play out. It is also clear that from the very beginning of our people's encounter with Torah, and onward through the ages, that our teachers have not backed away from wrestling with the violence. They have planted seeds in furrows that run with blood, seeds of very different fruit, right there in the context of violence, there in the midst of the harsh passages. Facing down the violence, they have offered teachings of peace and nonviolence.

With enough similar occurrences, it seems no accident, then, that from out of the brutal slaughter of Sichon, king of the Emorites, recounted by Moses at the beginning of the fifth book, D'varim/Deuteronomy (2:26), midrashic emphasis is given to the unique nature of pursuing peace as a mitzvah.  It is a familiar midrash that occurs in various sources, such as in the minor Talmudic tractate called Perek Shalom/the chapter of Peace, here emerging in Midrash Tanchuma (22) to Parashat Chukkat (on Numb. 21:21). Acting on his own initiative, Moses has sent messengers of peace to Sichon. The midrash immediately draws a proof text from Psalms (34:15), emphasizing the rightness of Moses' action and the evil of war, sur me'ra v'aseh tov/turn from evil and do good. We ask, as we always need to ask, why does the midrash draw support from that verse, toward what purpose? The point is then made that the Torah does not direct us to seek out mitzvot, telling us, rather, to fulfill a particular mitzvah when it is at hand, its doing dependent on time and circumstance. We remove a mother bird from the nest before taking fledglings or eggs only when happening upon such a moment of encounter, even then remembering the urging of Maimonides that it is preferable not to take the young in any case (Moreh N'vuchim 3:48). We are commanded to help our enemy raise up their fallen ox only when encountering such an opportunity to make a friend of an enemy. Giving more examples, the midrash then says of them all, if they come to your hand, you are commanded concerning them, but do not pursue after them. Only in regard to the pursuit of peace, the midrash makes clear, are we not to sit back and wait for the opportunity to fulfill the mitzvah, v'ha'shalom/and regarding peace, seek peace from your place, and pursue it in another place/bakesh shalom mim'kom'cha, v'rodfei'hu b'makom acher. Wrestling with violence, bravely entering the harsh passages, we become part of a noble tradition of those who are horrified by brutality and seek another way. Engaging with violence in the controlled context of Torah, so we are meant to learn to engage with violence in the worlds around us.

Encountering Sichon, Moses appears to have learned, though only partially, the lesson that is ultimately meant for us to learn in all of its fullness, to be a seeker of peace. Earlier, God has told Moses not to do battle with Seir, the people descended from Esav, using the phrase, al titgaru bam/do not let yourselves come into strife with them (Deut. 2:5). A short while later, in regard to Sichon, the same phrase is used, here in the singular, adding a word for emphasis, horrifying us now, as God tells Moses to engage in battle with Sichon, v'hitgar bo milchama/and let yourself come into war with him (Deut. 2:24). At first it seems that Moses has learned the earlier lesson, do not fight. Disobeying God, in the way of holy disobedience, that, perhaps, God waited for, hoped for, Moses sent words of peace/divrei shalom to Sichon. It is the moment celebrated in the midrash, Moses becoming a rodef shalom/a pursuer of peace.

Something went wrong, though, Sichon refusing to allow Israel's passage through his land. The stakes are raised higher, Moses saying that God had hardened Sichon's spirit. Is that it, and what does that mean? Peace-making is hard and the stakes are always high. The painful passage in all of its harshness brings home just how high the stakes are as we become the slaughterers of so many innocents, of women and children. Screaming out, we find ourselves as Moses. It is not there and then to which the text points, but to here and now, so many flash points ready to explode in our world, or to be defused with new and courageous thinking. What else might have been done to defuse, to find ways to accommodate and diminish the fear in the adversary, to find another way? What would we have done? What will we do? Weeping for Moses' failure and raging at his deeds, the shimmering text becomes a mirror in which we see ourselves. It is not about them and then, but about us and now.

Others have seen themselves in the mirror of Torah before us. From an ancient midrash and onward, the tears of the peace-makers flow as waters of life, our own tears added to a river of peace, yet to fructify the land and cleanse it of violence. Approaching the land of Seir and told not to fight, Moses is warned, they will be afraid of you, watch over yourselves well/v'nishmartem m'od (Deut. 2:4). What is this great care to be taken in regard to ourselves? It is the question that Rashi asks, And what is this watching/ma'hu ha'sh'mira? The answer has already been given, do not fight with them/al titgaru bam. From nineteenth century Germany, Rabbi Samson Raphael Hirsch writes, "The fact that Israel is reminded of these things when it is about to receive its land from the hand of God would seem to have far-reaching implications. For it gives the Jewish people to understand that God's providence also reigns over the destinies of nations other than the Jewish people, and that Israel is to take its place among the nations with a God-fearing respect for their possessions. Israel must not see itself as a nation of conquerors from whom no nation on earth will henceforth be safe...." Of a time that Rabbi Hirsch could only imagine, when the warning of Torah, amplified by Rashi, had become operative in the land, blurring there and then with here and now, Nehama Leibowitz wrote from her time and place in the early years of the state of Israel, "The new generation, full of their own strength and vigor had to learn to practice self-control and curb their own aggressiveness aroused by the very fear displayed by the weaker neighbor..." (Studies in Devarim, p. 29).

In the interplay of despair and hope as held in the shimmering haze of mid-summer heat, it is a season of struggle in the world around us and in the cycle of Torah and Jewish liturgical time. Making our way through the harsh passages of Torah and life, we find our own voice in the voices of those who have cried out before. Crying out first in horror, then to learn another way, it begins with our answer to the Torah's own plea, dorsheni/interpret me, search me. Searching ever more deeply, we come to read Torah as a context in which to confront violence and learn the ways of nonviolence. Getting up from the learning table, the challenge is to learn to do the same in the world around us, going forward into the weeks of comfort, allowing hope to rise.

Rabbi Victor H. Reinstein is the Founding Rabbi of Nehar Shalom Community Synagogue in Jamaica Plain, MA, which he founded with his wife, Mieke, in 2004 as an egalitarian shtibl committed to traditional Jewish practice and progressive social and political values.