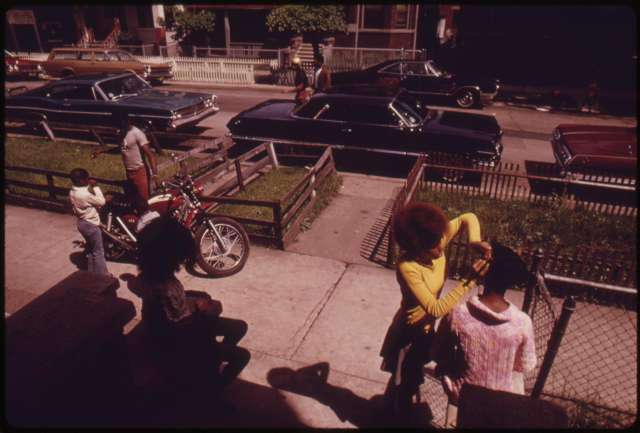 I’ve spent a lot of my life in urban America, from the inner city high school I attended to the work I’ve done with youth in the south Bronx, Oakland, and Chicago. And everywhere I’ve been, I’ve heard the same refrain: “Personal Responsibility!”

I used to hear it shouted in the hallways of my high school, and later heard it aimed at traumatized and impoverished single mothers and formerly incarcerated young men. It has become one of the core mantras of the neoliberal age—the application of the Wall Street values of competition and individualism upon the poor and the oppressed. The idea is that the problems of Black America and with the urban poor are due to the choices made by individuals rather than in political, historical, or legal injustices. In fact, the message of “pull yourself up by your bootstraps” is one in which everyone is indoctrinated beginning in childhood. The message is that we live in a meritocracy and if you have not “succeeded” it is somehow your own fault.

In their recent book, The War on Neighborhoods: Policing, Prison, and Punishment in a Divided City (Beacon, 2018), Ryan Lugalia-Hollon and Daniel Cooper challenge this ideology, rooted in the individualistic worldview of American capitalism, as it is played out in Austin, one of the poorest neighborhoods on Chicago’s west side.

While it focuses its research on a specific neighborhood, The War on Neighborhoods is really about a more general attitude toward punishment, poverty, and the narrative of individualism that dominates the public discourse and policy around poor urban communities. Since Nixon declared a “war on drugs”—the policies of which really were put in to place during the Reagan years—communities like Austin have seen a massive divestment in any kind of community support. It is the logic of neoliberalism and austerity that has brought about the closing of community centers, health (including mental health) clinics, and schools.

And it is the narrative of individual responsibility that has led our society on this path. We have been told, again and again, that crime is the product of bad decisions and failing families. We have seen the images on the news of black men committing crimes, heard the stereotypes of the absent father and the “Welfare Queen” single mother. But Lugalia-Hollon and Cooper show that not only are these stereotypes false—research shows, for example, that black fathers are just as present and attentive as white ones—but that the dysfunction of neighborhoods like Austin are also in no small part created by the policies that come out of these narratives. In other words, because Americans believe that black men are “criminals,” policies have been created that disproportionately send them to jail, and these policies are the cause, not the effect, of the destruction of these communities.

As scholars and urban planners, Lugalia-Hollon and Cooper unpack the actual impact of funding cuts in social programs vs. money invested in prisons. In one example, a group from Austin comes to the Illinois capital to protest cuts in social programs, but they are drowned out by the larger and better organized voices from a downstate town that is protesting the proposed closing of a prison, the primary source of jobs in their community. The prison stayed, but no money was found for schools or clinics in Austin. This is a story not so much about a white, rural community with an agenda to lock up Black men from Chicago; rather, it shows that both communities fall victim to the same economic forces—the small town has become dependent on the prison for jobs, while Austin, its factories gone, is impoverished. As this example demonstrates, neoliberalism pits the rural white working class and the poor urban black communities against one another.

Lugalia-Hollon and Cooper are not only scholars, but also organizers and activists who have worked for years on the West side. The power of their arguments comes from the personal connections they can draw from and the local voices they include in the book. Particularly powerful are the interviews with residents about their encounters with violence, police, and the justice system. These are stories with obvious economic impacts, stories of individuals unable to care for their families after being locked up for years behind bars, stories of communities with little opportunities due to investment almost exclusively focused on punishment rather than on community development. But there is also a deeper impact—the war on neighborhoods has been traumatizing. Imprisonment traumatizes the person who is locked up; it traumatizes the children, wives, and parents of the incarcerated. And an entire community of epidemic trauma results only in deeper trauma and violence, spreading across generations.

Not only did the so-called “war on drugs” take money that could have been invested in education or jobs and pour it into punishment, it also completely failed to actually impact drug use, its stated purpose. Drug use is up, and drugs continue to be cheap and plentiful. Again, this speaks to the failure to understand the reasons for drug use and to address the core issue of trauma. Lugalia-Hollon and Cooper cite the work of Gabor Mate, who teaches that only in dealing with childhood trauma can we prevent the self-medicating of drug use. And in a community without jobs, where children witness and suffer from violence and sexual abuse routinely—often the result of parents being frequently removed from homes—trauma is epidemic. This points to issues that can only partly, if at all, be addressed through public policy within a capitalist framework. Whereas capitalism values human beings according to economic status, a “new bottom line”—to borrow Michael Lerner’s language—understands all life as sacred and understands our purpose to transcend economic productivity and competition. We are in this together. And we are here to create meaning, not merely to make money and to be consumers.

All this leads us to the link between policy and the human spirit. The point isn’t that there is no individual role in solving the problems of a community; it is that there is a false dichotomy between individual and community. Genuine healing can happen only through an integration of the soul and the cosmos, of the individual and the community. Of course this requires some personal responsibility, but it also requires all of us in a society to recognize our interconnectedness and to take responsibility for each other. Lugalia-Hollon and Cooper point us toward public policies that reflect this interconnectedness, moving from mere individual responsibility to collective responsibility.

Moreover, it requires us to ask what it is we truly want from a society—do we merely want a bigger piece of the pie, or do we want a system that allows for us to truly care for one another? As The War on Neighborhoods shows, this requires public policies that can allow us to in cultivate healing from our shared traumas and compassion for those who have been labeled as “other”. What might such policies look like? First, rather than merely redistribute resources, policies must challenge the values of the capitalist system. Second, programs must address not only economic injustice, but also offer a way to deal with trauma. Third—and this is the core of the message that The War on Neighborhoods offers—we must begin to challenge the narratives that have marginalized communities like Austin and that falsely pit communities against one another. The pathway to safe, vibrant, and just communities is not more punishment or alienation and separation, but the realization that the fate of Austin, and communities like it, is shared among us all.

Theodore Richards (www.theodorerichards.com) is the founder of The Chicago Wisdom Project (www.chicagowisdomproject.org) and the author of six books and numerous literary awards, including two Independent Publisher Awards and two Nautilus book awards. His most recent book is The Great Re-imagining: Spirituality in an Age of Apocalypse. He lives in Chicago with his wife and daughters.