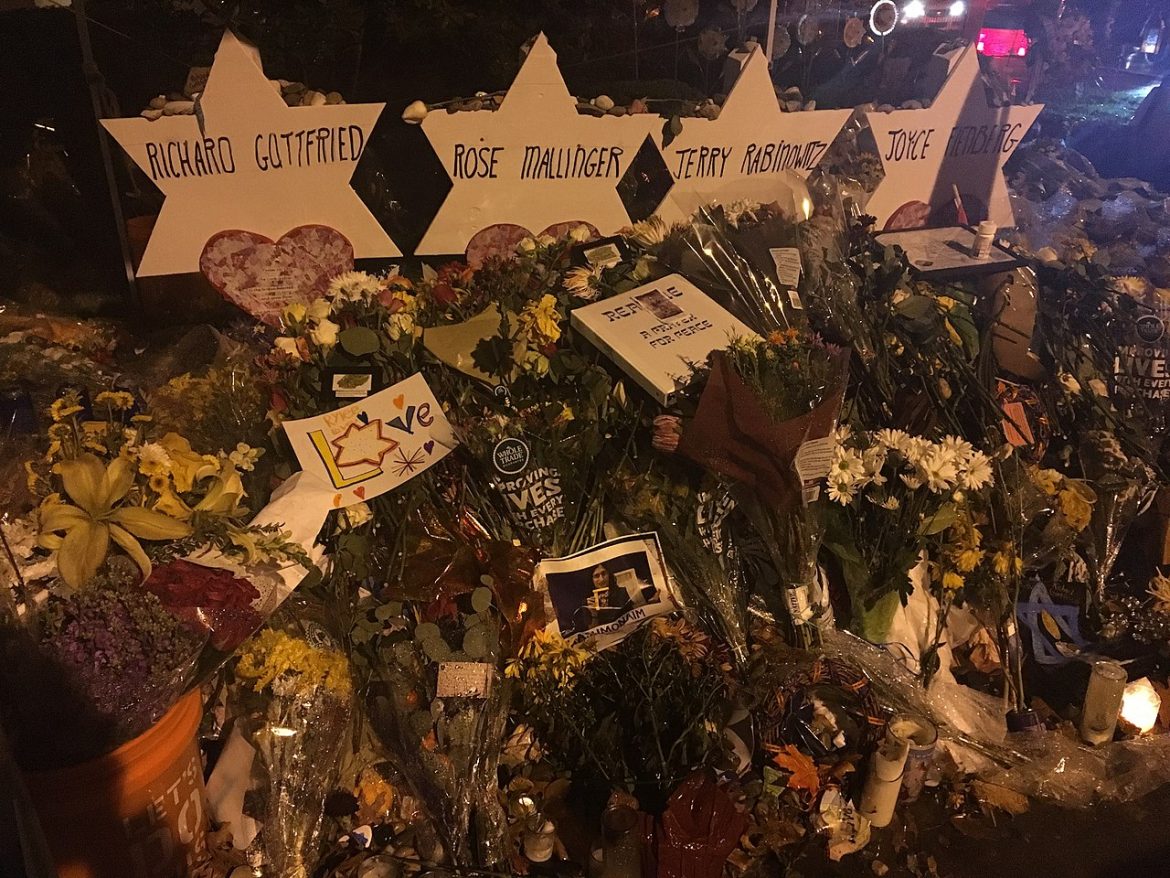 Memorial bouquets outside the Tree of Life Synagogue in Pittsburg. Image courtesy of 燃灯/Wikimedia.

Note from Tikkun: Rabbi Lerner’s article below appeared in Salon on Friday, May 3. You can read it below. He is happy to read your responses (send them to him at Letters@tikkun.org).

Holocaust Memorial commemorations around the world began May 1 but are likely to continue through this coming weekend, while Jews and our allies grieve the murder and wounding of Jews at the Poway synagogue in Southern California this past Saturday. I hear more and more young people suggest that something akin to the Holocaust might actually happen again, this time here in the United States.

I don’t think anyone believes it will be exactly the same. One out of every three Jews alive on the planet 1939 was murdered by 1945 during the systematic genocide committed by the Nazis, aided by all-too-willing civilian haters of Jews in numerous nations — not just in Germany, Poland, Lithuania, Latvia, Estonia, Ukraine, Hungary, Slovakia and other Eastern European countries, but also in France, Greece and the Netherlands.

While all this was going on, the U.S. shut its doors to Jewish refugees seeking asylum. Britain, seeking a steady supply of oil from Arab states, acceded to their demand to prevent Jews from escaping Europe and going to the nearest country with a large Jewish population — Palestine. The U.S. refused pleas from American Jews to bomb the concentration camps, which would at least have slowed the murder rate down by destroying the gas chambers and crematoria where Jews were being killed at an estimated rate of 5,000 to 10,000 every day.

The scenario in the U.S. that concerns the younger Jews that I’ve spoken to would be different. A growing international white nationalist movement that has already shaped the consciousness of those who killed Muslims in New Zealand and Jews in Pittsburgh and Southern California could continue to grow, using Facebook and other social media. These white nationalist movements in the U.S. and Europe appeal to many who have felt shamed and dissed by the left and encouraged by the hate language that consistently accompanies the political rallies of President Trump and his willing accomplices.

Trump’s legitimation of using violence against those at his rallies who challenge the white nationalism that he labels as “America First” — and the violence he has authorized against powerless refugees at our borders — sends the message that violence is OK. Jews, Muslims and people of color, particularly African Americans, have long been the right’s favored targets, with the more restrained white supremacists in both parties contenting themselves with mass incarceration and eliminating social programs designed to help the poor and powerless, while their less respectable allies resort to violence and murder.

Why Jews? First, because Jews have been the most consistent allies of African Americans and refugees. Second, because while our culture has devoted considerable energy to exposing the distortions of racism against African Americans, and to some extent Native Americans, and has also done mass education against sexism and homophobia, there has never really been an exploration of, and public education about hatred of Jews.

Why not? Because that hatred is part of Christian privilege in this country. It is deeply rooted in the teachings of the Gospels that claimed Jews were responsible for the crucifixion of Jesus, not the Romans who actually did it. In the Middle Ages, Jews were forbidden from owning land and from joining guilds. This left most Jews barely surviving and living in conditions of great poverty. A handful were allowed to become traders, and as these became successful the myth spread that Jews had more money and power than everyone else. During the Holocaust many of the German churches continued to teach hatred of Jews. And sadly today, even the most tolerant and Jewish-friendly churches fail to denounce the extreme hatred of Jews in the teachings of Martin Luther and other Protestant theologians, or to challenge it when it pops up among people of color. Even some of the most progressive churches fail to teach their own students in Sunday school about the notorious lies about Jews spread by Christianity throughout much of its history.

This became clear to me several years ago when I was invited to speaker at a weekend of demonstrations and teach-ins initiated by some of the most progressive Catholics in the U.S. They were seeking to challenge the School of the Americas, which for decades has taught police forces in South and Central America techniques of torture and disruption of democratic movements that they could implement in their own countries. I was invited to a Mass for demonstration attendees, and the biblical selection chosen to read was the Gospel of John’s account of the crucifixion, the one account that seems to blame the Jews (not the Romans) for the crucifixion and portrays the Jews as enthusiastically taking the blame for themselves and their descendants.

When I asked Catholic progressives to complain, they were shocked to learn that this passage had been used for the past 2,000 years as the basis for stirring up people who were suffering from an oppressive class structure to instead express their frustration and anger through pogroms (including murder, rape and theft from Jewish communities).

It hasn’t helped matters that the Jewish establishment through most of the post-Holocaust years has frequently accused fellow Jews and many progressive Christians of being anti-Semitic when they criticized Israel’s oppression of the Palestinian people. Many in the Israeli Jewish establishment have weakened the moral force of calling out anti-Semitism by leveling the charge at those who make legitimate and powerful criticisms of Israeli policies. This is likely to become even more true as Israeli Prime Minister Benjamin Netanyahu escalates the assault on Palestinian human rights. Israel would be stronger and more secure were it to deal generously with the Palestinian people — either by helping create an economically and politically viable Palestinian state or by giving the Palestinians living under Israeli military occupation “one person, one vote” in Knesset elections. Calling those who advocate for this position anti-Semites makes many view the charge of anti-Semitism less seriously. At least until Jews are literally being murdered by white nationalists. Sadly, that moment has arrived.

What we need now is a strategy to defeat or marginalize the white nationalists who will be around long after Donald Trump is gone. “Resist” is a good first step, but it’s not a strategy.

The first thing we must do is to insist that the federal government provide free security forces to every place of worship and every public school that has a reason to feel in danger of violence. White nationalist extremism, not families seeking asylum on our borders, are the real national emergency. At the same time, it should make illegal the possession of assault-style weapons and the possession of more than one gun or rifle of any sort, and should engage in a campaign to collect those guns.

Next, we need to mandate that every school and college that seeks to retain accreditation or receive public funds or student loans must implement a required course at every grade level to teach about the history and dangers of racism, sexism, classism, homophobia, anti-Semitism, Islamophobia, immigrant-bashing and other forms of “othering.” We must also teach what becomes of nations that abandoned democracy and human rights and the disasters that ensued.

Yet these courses will fail unless they include a compassionate attitude toward people whose economic and psychological suffering, or their feeling of not being respected, recognized or cared for in the competitive marketplace, have led growing numbers to be attracted to white nationalist movements or reactionary religious movements which offered them a sense of belonging and respect that the capitalist marketplace never provided. And these movements taught, falsely, that “the Jews” ran that capitalist market.

This mandate to schools must be matched by a mandate to content providers for radio, television and r internet to share information about the way this “othering” of previously oppressed groups serves to distract people from the real sources of their suffering, which have much more to do with the ethos of selfishness embedded in the global capitalist market.

Finally, we need to ask the Christian world to teach about its role in promoting anti-Semitism in the past, acknowledge that the Gospels are flawed in contributing to hatred of Jews, and develop with Jewish progressives a comprehensive educational agenda to uproot this legacy from their midst.

Some Christians are already doing this, but most only give lip service. They have not mandated systematic education about anti-Semitism and the need for Christians to do the kind of repentance that many of us in the Jewish world affiliated with Tikkun magazine or with the interfaith and secular-humanist-welcoming Network of Spiritual Progressives are doing in relationship to Israel’s oppression of Palestinians and that African Americans and the Black Lives Matter movement have called for from whites. These campaigns would be serious first steps in reducing the growing support for white nationalist hate groups and thereby provide protection not only for Jews and African Americans, but for everyone, since all of us are at risk when hatred, violence and racism flourish.