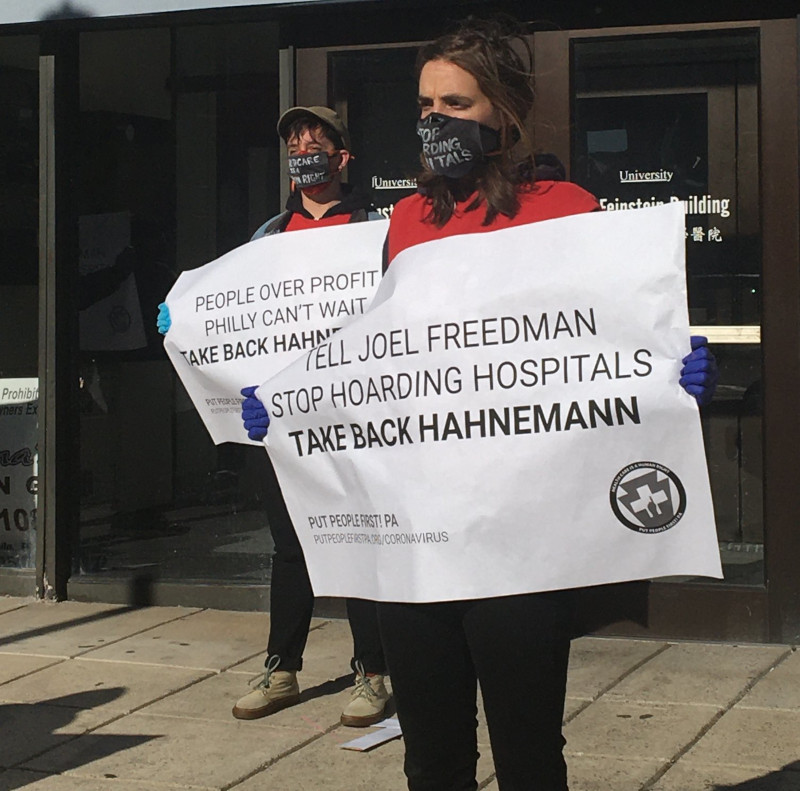 Passover is a time for telling stories: Stories that instruct us on how we end slavery and servitude and how God moves in history when we fight for freedom. It’s a time to see the living truth of these stories in the struggle for freedom today, and to feel anew God’s call to go up out of the idolatry of wealth and violence toward the promised land of shared blessing and bounty. As this pandemic is revealing the depth of injustice, inequality, and immorality in our society, it’s more important than ever to take that ancient story seriously and recognize our collective obligation to come up out of Egypt today.

In Exodus, the Israelites arrive at the edge of the Red Sea after breaking free from bondage. Pharaoh, having recently agreed to let the people go, has his heart hardened by God and sets out in armed pursuit to bring them back into servitude. And so it is that the next day the Israelites find themselves trapped, Pharaoh's army behind them and this impossibly large body of water ahead. They cry out to God in fear and confront Moses, saying “Was it for want of graves in Egypt that you brought us to die in the wilderness?” They tell Moses that they knew they should never have left; that while bondage is bad, death in the wilderness is worse.

Moses replies, telling the Israelites not to be afraid, that God will fight for them and free them from Egypt forever. At that moment, God breaks in and says to Moses: “Why do you cry out to Me? Tell the Israelites to go forward.” According to midrash, however, they don’t listen. The tribes fall to fighting among themselves. In the midst of all this arguing and fear a man named Nachshon, an elder of the tribe of Judah, runs forward and leaps into the sea. He advances deeper and deeper, the water rising past his mouth and up to his nostrils. Only then, with not even an inch to breathe, God instructs Moses how to split the sea.

Doesn’t the truth of this story - of Torah and of midrash - live all around us today? Are we not standing at the edge of our own sea? In this time of plague and crisis, our choices, just like those facing the Israelites, are clearer than ever. Behind us is Pharaoh and the old, violent ways of the world: death, disease, and a social order that can continue only through the hardening of hearts and the deepening of injustice. We didn’t plan it this way and we are surely unprepared, but ahead of us is the sea and the uncertain struggle to bring new and good things into the world: the sharing of abundance, the end of poverty and hunger, respect for the sacredness of human life. In so many ways, God is telling us that if we want freedom we must go forward.

This critical moment, just like that moment in the Israelite freedom struggle, cries out for leadership: Leaders who are clear about the direction we need to go, regardless of the difficulty. Our elected officials and those in power may be failing us, but the truth is that this kind of leadership is being demonstrated all over the nation. These are the leaders, like Nachshon, who are taking life-saving action from a place of necessity. Many are poor and dispossessed, those without homes or health care, without jobs that pay living wages or money for food for their families. Behind them, and behind all of us, there is only death. In front there is the hope of freedom; the chance to fulfill God’s promise when Moses first asks who God is and God replies “I am the possibility of possibilities”.

I imagine Nachshon at the very back of the Israelite encampment. He is the first to see Pharaoh’s army approaching. The first to feel the tip of the spear. That’s why he is the one to run forward, through the whole great host. That’s why he jumps into the sea.

The story of Nachshon of the Exodus and of the Nachshons of today is a call to everyone who thinks we can go through this pandemic and return to normalcy. A return to “normalcy” is nothing but a return to serving and suffering under Pharoah. These leaders, the first to feel the violence of an army, of a system, beholden to death and coming for us all, know why we cannot go back. Forward, the way God has chosen for us, may be difficult and scary, and it will involve life-or-death struggle, but it’s also the only direction we can go.

Nachshon’s name, translated from Hebrew, refers to waters in a storm. His example poses the question to us: Who will chart a way forward through the toss and storm of the waves of our day? Who will go first, knowing that when we make it to the other side the values and the injustice of the old society will not be able to follow us.

Nachshon is jumping into the sea right now. He is the wildcat strikers, the homeless leaders, and the tenant organizers. He is the members of Put People First! PA, who, on April 2nd, left their homes with an abundance of caution to protest together outside of Hahnemann Hospital in Philadelphia, which was bought and shuttered by a real estate speculator and is still closed even in this pandemic because he tried to extort $1 million a month out of the city to re-open it. Today, a hospital sits empty while people are dying, and the worst is still to come. These are the leaders up to their nostrils in outrage and moral vision, calling us to follow and make good on God’s promise to split the sea.

When we cross the sea from bondage into freedom, we can transform the whole medical system into a public good and secure health care for everyone. We can elevate the rights to housing, food, water, a clean environment, and peace above the right to private profit. We can refocus our economy on the production and protection of human needs. We can end the idolatry of wealth and war. But we cannot do it under the heel of Pharaoh. If we want freedom we have to break the powers that are holding back the demands of justice, and we cannot do this unless we follow Nachshon. When the homeless take over hotels and houses, we must follow them into the sea. When workers strike to say that human lives are more important than profits, we must follow them into the sea. When the sick, the uninsured, the poor, demand that we reopen hospitals and protect people over profits, we must follow them into the sea. These are the leaders who are showing us what it means to go forward today, and this is what it will take to make a path toward freedom.

Daniel Jones is an organizer and educator based in Miami, Florida. He's part of the Florida Coordinating Committee of the Poor People's Campaign: A National Call for Moral Revival, and a member of Put People First! Pennsylvania.