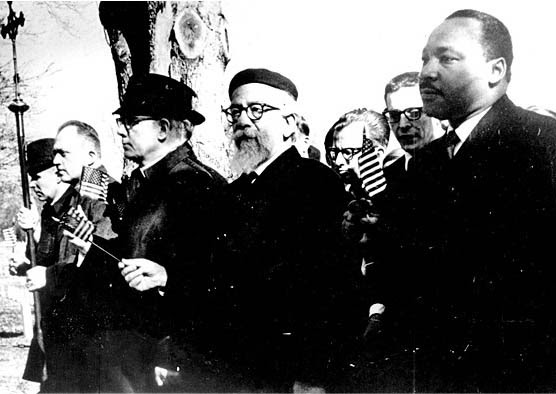 (Abraham Joshua Heschel, who marched with Martin Luther King Jr. in Selma to protest segregation, and chaired the Clergy and Laity Opposed to the War in Vietnam, mentored Michael Lener in the years he studied at the Jewish Theological Seminary in NY while obtaining his B.A. at Columbia. Susannah Heschel, a member of Tikkun’s Editorial Advisory Board, and formerly a co-chair of the Tikkun Community, S is the Eli Black Professor of Jewish Studies and chair of the Jewish Studies Program at Dartmouth College. Her scholarly work has focused on Jewish-Christian relationships in the religious life of Germany:   The Aryan Jesus: Christian Theologians and the Bible in Nazi Germany, and Abraham Geiger and the Jewish Jesus.  She has edited two powerful collections of her father’s essays —  Moral Grandeur and Spiritual Audacity and Abraham Joshua Heschel: Essential Writings —   and a collection of essays entitled  On Being a Jewish Feminist.

(Susannah Heschel was asked by Arthur Waskow to write about her father on the occasion of the anniversary of his death. Waskow is chair of the Shalom Center and a member of the Tikkun Editorial Advisory Board of Tikkun.)

People often ask me how many years it has been since my father’s death. I never want to answer. For them, it may be counted in years or even decades – such a long time. For me, it feels like yesterday. Some might say the trauma of his death is still with me, but I would say that his presence remains so vivid in my life that talking about his death feels odd and unreal.

My father has been present in my life this past year with particular strength because of the many horrors that I know would have been devastating for him to witness. He always used to reassure me that the Nazis were defeated, that the United States was safe, that what happened would never happen again. To see the KKK marching in the streets, neo-Nazis celebrating, with ugly racism coming from the White House – and so much more – I know he would be again be pacing the floor, unable to sleep, as he was pacing and sleepless over the horrors of the Vietnam War.

Today the Jewish world seems horrifically engaged in a kind of internal civil war, a war that is anything but civil. For my father, life was precious, every moment. He used to say, time is life, and to “kill time” is to commit murder. He was intensely engaged at every moment. The efforts today by Jews to attack and try to destroy one another out of political disagreements would have horrified my father. Zionism was supposed to unite us, not divide us. Racism he called blasphemy, satanism, unmitigated evil. There are Jews who confuse the Code of Laws with God. Some people try to be religious the way their grandparents were religious – my father called that ‘spiritual plagiarism.’ Selfishness, indifference, a cold heart –– this was the opposite of a religious person, for whom awareness of God begins with wonder.

What is a religious person? A person who is maladjusted; attuned to the agony of others; aware of God’s presence and of God’s needs; a religious person is never satisfied, but always questioning, striving for something deeper, and always refusing to accept inequalities, the status quo, the cruelty and suffering of others.

My father was grateful for allies. He always listened, and he sought bridges with those who disagreed. Yet he was also often lonely and hurt – by colleagues and academic politics, by students who complained when he rescheduled a class in order to attend a demonstration, and most of all, by the callousness he encountered.

Yet he never despaired – despair is forbidden, he used to tell me with a smile. You must have faith and hope, he would say. In his presence, I always did.

Where did my father find his faith and hope? In prayer, most of all. I loved to sit in his study while he prayed, just to be near him and feel enveloped by his prayers. I think of him, praying with tallit and tefillin, and I feel his warmth and love. More than anything, he was a person of enormous depth; you could talk to him about anything, he was so open and able to feel so deeply. His empathy was extraordinary.

God was rarely present in the Shabbat services we attended at the Jewish Theological Seminary. Instead, he would daven at the Gerer shtiebl on the Upper West Side, led by Rabbi Cywiak. During the week, his spirits would be renewed when he spoke by telephone with his brother in law, my uncle, the Kopycznitzer rebbe, one of the kindest, most gentle and loving people I have ever met. My father discussed everything with him, including the war in Vietnam, his involvement in Vatican II, his protests on behalf of Soviet Jews, his collaboration with Martin Luther King, Jr.

My father’s voice is always needed, but these days I feel most strongly that I need him for strength and hope. There are so many wise people delineating the horrors we are now facing, and we know that we have to muster our strength for a long and difficult struggle to preserve our democracy, to save our planet, and most of all to protect the many human beings whose lives are being destroyed by American militarism, racism, xenophobia, antisemitism, and cruel, inhumane economic “policies.”   The mendacity that my father saw in the United States government has increased, but so has our ability to recognize it and fight back.

My father’s yahrzeit  follows the Torah portion Vayechi (Gen. 47:28 to 50: 26), about the death of Jacob and the blessings he gave to his sons and grandsons. Where are the daughters, I ask? My father had only one child, a daughter, but he gave me blessings the Torah gives to sons. The haftarah of Parshat Vayechi comes from I Kings 2: 1-12, about the death of King David and the blessing he gave to his son, Solomon, while on his deathbed. My father dedicated his book, Who Is Man, to me by quoting the parallel passage in I Chronicles 28:20: “Be strong and of good courage and act. Do not be afraid or dismayed; God is with you.” I share that blessing with all those who strive to follow in my father’s footsteps, imbued with his teachings and fortified by his faith and hope.