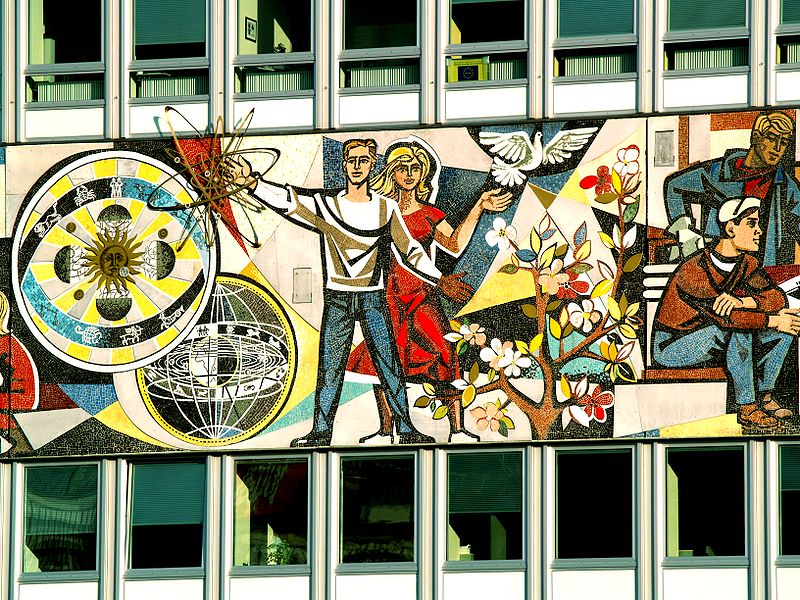 Socialist artwork on display in what was formerly East Berlin. Image courtesy of Wikimedia.

The aspiration among the emerging generation today to participate in creating a socialist society should not be understood as a desire to replace one system called capitalism with another system called socialism. That very way of thinking—in which the human person is imagined to be a cog in one or another system—is what young people are trying with all their spirited energy to throw out the window.  The very idea that there is something called a “system” that exists outside of us and that we are “in” is actually part of what this rising generation is rejecting. Instead they are aspiring to create a new space of existence in which the passivity and dreariness and absurd economic slavery of their current reality is overthrown and surpassed in favor of a new world of greater joy, creativity, cooperation among us one with the other, and beloved, heartfelt community.

The idea of socialism as a mere “economic system” is a legacy of the old thinking emerging from the Enlightenment four hundred years ago, in which the spiritual dimension of our common existence was decisively eclipsed in favor of science, fact-centered objectivity, and Reason understood as detached rational thought directed at satisfying mere material needs. Both Darwin with his emphasis on mere “survival’ of the organism as the centerpiece of evolution, and Marx with his emphasis on history as a struggle between classes over the means of material existence were embodiments of this old way of thought. When the universality of the longings of the soul were rejected and instead relegated to being a mere matter of “personal belief” to be indulged in in private, we humans (temporarily) threw out the baby with the bathwater—in our effort to overcome the legacy of religious persecution and the abuse of spiritual claims to knowledge about the world, we obscured for hundreds of years the essential longing of all of us to live in a loving world of mutual presence and care and (temporarily) embraced the idea what “we” want is simply the individual satisfaction of material needs.

The very idea of “the economic system” reflects this split ushered into human thought with the Enlightenment. The idea that we live “in” an economic system, whether capitalist or socialist or mixed or something else, suppresses the reality of our social-spiritual existence in favor of a mental picture of society as a kind of mechanism, identified from the outside as a “system,” that functions on its own, tossing each individual hither and thither. No longer able to fully experience reality from the inside as a living existence in which we are always in relation to each other, longing for one another’s recognition and affirmation of our presence here as a togetherness, we instead withdraw our presence from our thought about the world, actually erase ourselves as living, breathing, loving, vital social beings, and render ourselves as passive actors in the machine, the “system”. That is what today’s emerging generation are rejecting, saying in effect: “The world imposed upon us is obviously insane, with a lunatic as president and comical inequality of wealth (Jeff Bezos making $230,000 per minute) and us slogging our way through meaningless work routines to get enough money to pay banks holding our student loans and landlords charging preposterous prices just so we can sleep inside. We reject this insane world, in totality, and we want to bring into being another one embodying the vitality and hope and loving energy that is obviously inside all of us waiting and wanting to get out.”

So the new socialism is not a call to bring back the oppressive state mechanisms of the Soviet era, which were partly embodiments of the despiritualized rational thinking of the Enlightenment-spawned Marxist era, but rather to bring into being a new world expressive of the inherent love and goodness that we humans were born with as infants, that every new infant obviously embodies in the wide-eyed longing for love and contact, and true recognition and connection, that everyone of us still carries in our hearts. But to be successful this effort at transformation, not only of the world but also our thought about the world, must become “respiritualized”. That is, we must start to think about both the problems of the existing world and our aspiration to transcend those problems by thinking with our hearts—a new kind of rational thinking that does not objectify the world and us along with it, but that restores to us our full subjectivity as social beings-in-relation-to-each-other desiring mutual recognition and mutuality of presence, desiring loving and cooperative connection. As Van Morrison put this very same idea:

“If my heart could do my thinkin’

And my head begin to feel

I could look upon the world anew

Seen through this respiritualized lens, the world suddenly reappears to us not as “capitalism” or “socialism” in the old sense, but as a culture saturated with fear of the other, with each person existing deeply withdrawn into him/herself and in fear of the person next to him or her, in fear even of his or her wife or husband or children in routinized family life, but certainly and obviously in routinized workplaces shot through with a kind of infinite social separation as each person “performs” his or her role, and perhaps even more recognizably in walking down the street passing each other with blank gazes afraid to make eye contact and marching along in mutually enforced solitary confinement staring into our cell phones. Seen through this enlivened lens that produces an enlivened way of seeing and knowing, “capitalism” is simply rotating fear mediated by money, in which people barely succeed in feeding each other at arm’s length, with each human person preoccupied with mere survival “on his or her own,” meaning knowing one can never rely for sure on another human being to assist us in the project of bare material survival. That fear of the other coupled with the requirement of surviving on your own by manipulating your life conditions from within your own withdrawn space is the only reason we let 20,000 children of the world die of starvation each day…we are so withdrawn into discrete and separate spaces that we do not feel responsible for, and do not feel able to feel responsible for, others who have not been able to scramble to save themselves amid the rotation of fear that is the lived reality of, and that actually is, capitalism

This fear-saturated social reality, this rotation of mutual anonymity, can only be overcome by creating a new world of trust and care and authentic mutual recognition, but the creation of such a world must take account of the legacy of mutual fear out of which it is being born. That legacy of fear is very powerful and will not easily surrender itself to aspirations born of the loving impulse toward connection, because from the standpoint of each person’s isolation, everyone is afraid of being duped, taken advantage of, humiliated, rejected.  People today are so conditioned to exist in separation and fear of the other that they would rather die in a nuclear war than let down their guard by mistake and face a devastating humiliation and rejection by the other…thus today we have wars raging all across the globe, and the accumulated fear of the other that has given rise to these wars supports itself through inflated nationalisms and other forms of pseudo- or imaginary community that act as a defense against seeing the other as One of Us, as the same as we are. We are conditioned across many generations to see the other as a Threat rather than as the source of our completion.

So the new world that we all want, and that today hundreds of thousands of young people are coming out into public to support, must be born in the very process of healing this enveloping legacy of fear: the new socialism must be a spiritual socialism that fosters confidence in our capacity for empathy, compassion, and mutual sight, and that gradually leads each person to feel safe that if we let down our guard, the other person, the person next to us, the person across from us, will remain out there with us, will join us in a new space of increasingly spontaneous trust and affirming co-existence. The work of achieving this new world requires incorporating a spiritual component into our activism, so that our mistrust and fear of the other can be “thawed out” in the face of practices that enable us to get used to residing in each other’s beloved presence, in the simple grace of each other’s existence.

This spiritualization requires incorporating but also going beyond the economic manifestations of socialism—incorporating but also going beyond universal health care, free college for each new generation, worthwhile work for truly living wages. And it also requires incorporating but going beyond the important step of linking democracy and socialism, as Democratic Socialists of America has done, since mere democracy cannot create a safe social space of mutuality if it remains a democracy of strangers saturated with the fear of the other that has conditioned us and made us strangers in the first place. Rather these essential economic and political dimensions of the new socialist movement being born today must be supported by a new social-spiritual dimension linking the nurturing of spiritual community with socialism, so that the transformation of the economy in a more cooperative and egalitarian direction, and the transformation of political life in a more democratic direction, is accompanied by a healing of the legacy of separation and fear of the other that has so far undermined our radical and visionary social efforts.

Peter Gabel is editor-at-large of Tikkun, His most recent book, The Desire for Mutual Recognition: Social Movements and the Dissolution of the False Self (Routledge Press, 2018).