Editor’s Note: The following article appears in the latest issue of Tikkun magazine. To read all the other wonderful articles, purchase the issue here.

A lot has happened since you first asked me to tell this story of hope or truth or rage. It was a story to me then. Something I could imagine in adventure-movie style; flames of glory surrounding our friends as we fought back against evil.

Now I feel it for myself. I have memories now, Ben. Memories of events I didn’t live through. But memories that have always somehow been mine.

Before I remembered, I thought colonization functioned differently for Jewish people. Like maybe this theory that anti-semitism is such a unique form of oppression meant we actually hurt less. We were somehow different from other people who have also felt pain as a people.

But I’ve been wanting to tell you this memory of my family. It makes everything feel simultaneously more simple and more awful. I’ve known its outline my whole life, like it was a dream I had when I was a child. And I think you might know it too.

It starts with a hand-drawn map of Vishay, Lithuania. I learned the name of this village from the football team my grandfather jokingly raved about.

“Your great-grandfather and all of his brothers played for the Vishay Bulldogs,” he’d tell me when I was young.

He loved to tell stories like this about the family he’d married into. His own father died while his mother was pregnant with him. His siblings scattered throughout the country after they served in World War II.

My grandmother came from a swarm of loud brothers, loyal sisters, and joyful parents who traveled the world to stay together. I could tell my grandfather was looking for a family like this. For stories that would nurture him through the loss of a man he never met.

I think we are searching for something similar, my grandfather and me. So I call out to him now in the only way I know how.

Once we began speaking again, we couldn’t stop. He showed up in my dreams, at the bus stop, while I was eating with friends. He led me to this memory and helped me understand its power.

So, this map of Vishay. I found it on a website called—you won’t believe it—but it’s called Shtetllinks.com. It’s a barely functioning holdover from the dot-com era that gave me as close to a feeling of opening a dusty, ancient box that I can still get.

A man named Yosif Levinson had drawn out a bare-bones map of Vishay, the village my father’s maternal grandparents came from. This map maker lined the one main road and two giant lakes with small squares labeled “Jewish Houses.” Each house had a number and each number was assigned to a family. This man, Yosif Levinson, knew where every Jew lived—like you might remember the homes of your closest friends.

So there it was. Simple. “66. Berznitsky” down by the bend in the road. “62. V. Fleisher” right next to the synagogue and the lake. My great-grandparents grew up only numbers apart from each other. I could feel their love story stretching out between these houses like giddily hung streamers.

Seeing that little square next to the water helped me remember the gurgling sound of tides breaking under the weight of oars. There was my family with bulging muscles and gritted teeth casting out coarse, handmade nets. There they were, catching fish in the light of early dawn to later sell at market.

And the synagogue. It too nestled along the banks. When we sat in the pews the beautiful smell of clean water and earthy mud wafted through the windows. We breathed its scent into our lungs as we gathered under the wooden shelter to honor every blessing and curse that befell us.

This is my family’s story. The part that’s easy to write about. The Before that heals me more than knowing the details of After. But every Jewish family has some story of After that is easier to tell if we didn’t know what came Before.

After is choppy, ugly. But I need to share it with you. Still, admitting to it makes me feel embarrassed. Like I’m asking for your pity. Like you haven’t felt this sorrow too.

But I feel its weight hanging heavy on my bones.

I ask because I am embarrassed to feel so alone.

But Vishay still stood. There were brothers and parents and kids walking to synagogue, falling in love, catching fish in this town cut in two by its lakes.

I learn the rest from Google searches.

On June 2, 1941 the German army invades Vishay. With the help of local Lithuanians they force all of the remaining Jewish men into the synagogue. At night they lock up the doors and windows. During the day they send the men out to do humiliating manual labor like cleaning the streets and destroying Soviet bunkers.

By September 15, 1941 the Germans take all of the remaining Jews of Vishay to a nearby ghetto on the Katkiškės estate where they live until November 3rd.

There’s a video on Youtube entitled “Prayer Meeting Veisiejai” that was posted in 2017. You should look it up if you’re curious. In the video two men walk arm in arm down a long, wooded path. The trees are so green and dark and lush I thought it was a CGI background.

“So you became a Christian in 1991,” the man behind the camera asks in a TV host voice.

“Yes, about 23 years ago,” says the man in what I assume to be a Lithuanian accent.

“And now we are going to a prayer meeting!” the loud voice behind the camera announces as if he is narrating migrating salmon in a wildlife video.

And the camera cuts to a boy playing piano in a big wooden room.

And it cuts to three people standing outside a simple, lime-green building.

“This is our church right here!” Again, the man behind the camera.

He zooms in on a gold plaque hung on the outside wall. It lists the name of the church and its website.

“This is the site of an old Jewish synagogue,” the accented voice says from off screen.

“This is awesome!” says the man behind the camera.

And then we all walk into the Baptist Church that was once my family’s synagogue.

The video is so slow and deliberate. I can see everything. The doorway where the mezuzah was once affixed, the wide hallway where little kids played hand games while waiting for their parents to stop schmoozing. The doors that were once barred shut every night.

Then the Christian people singing hymns in the pews. Laughing and holding yellow flowers. A giant cross hanging in front of the big windows. The breeze blowing the curtains, letting in that beautiful smelling air.

I study their faces to see if they look anything like mine.

I call my great uncle a week after watching the video. We speak for the first time since my grandmother died.

I want to ask him what he remembers. He starts simply, “It was very hard for them.”

He uses words that are still urgent 100 years later. My father escaped the Russians. My mother and older brother ran from house to house, hiding behind stoves. On the boat, she was scared they’d be turned back because my brother had a cold. 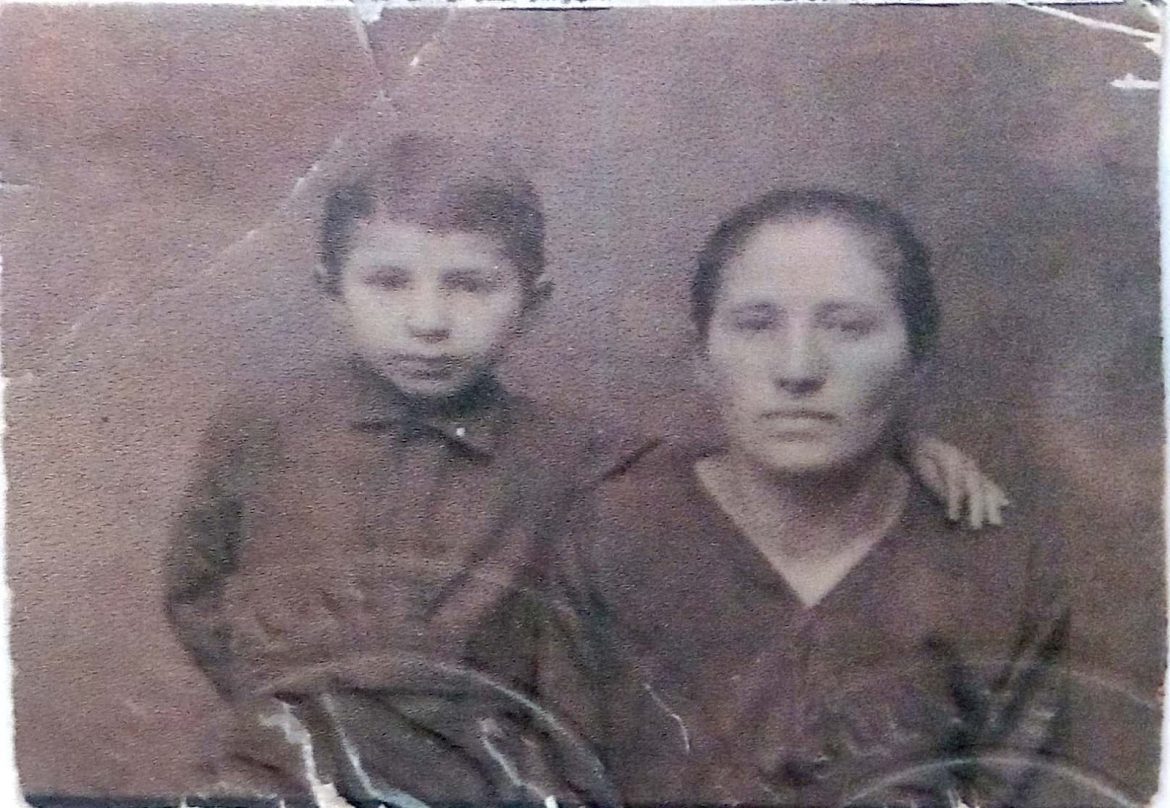 He sends me a packet of documents. Photos of my great-grandmother Esther and her boy Sander at Ellis Island. Pictures of an awkward child dressed in a Soviet button-up next to a man with a beat-up jacket and flowing white beard. A woman with gaunt cheeks and a bubushka covering her hair.

There’s a recent picture of a yellow house with a red tin roof overlooking a lake. Three people stand at the locked door, hand on the door knob. Number 62. 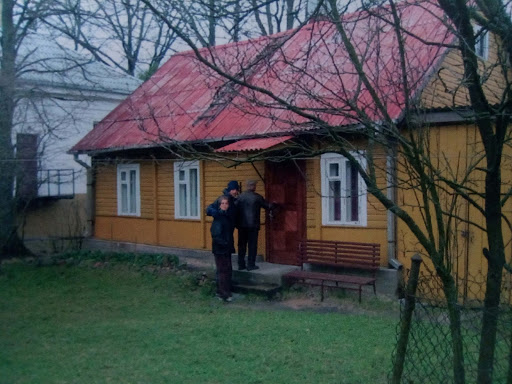 In 2004 my grandmother’s cousin Rochelle writes in an email, “The yellow house is the one Velvel lived in as a fisherman—on the lake. Esther and Sander lived there until they came to the US. My uncle (he is 89 right now) is in a lawsuit trying to get the property back—lakefront after all.”

I hope this story speaks for itself. I am only 23 but I have already spent years trying to recall what we have lost.

I know we speak so much about the After but it’s the Before that I want to try and remember. The Yiddish songs Esther sang as she made Shabbos chicken and stinky’s smeltz. The wet stones glowing on flames, steaming up the hot houses where people took a shvitz.

But it’s harder for my great uncle to recall these things. Instead he tells me about being so poor in America they couldn’t afford a second set of dishes for Pesach. My aunt tells me that they couldn’t keep Kosher because there were few Kosher butchers in a city like Indianapolis.

We are living in the After that our grandparents taught us to call paradise. But we know they never felt fully comfortable here either. They told us to be grateful that our neighbors accepted us. But the lauded safety always felt contingent on our ability to prove our gratitude with assimilation. They tried to teach us as much about Before as they could without crying.

Now, I’m hardly a grandchild anymore. My grandparents whisper their memories into my ears while I sleep.

And I have my own memories now. I remember my dad affixing his kippah only when we pulled into the parking lot of our synagogue. I remember my mom asking my best friend not to gloat about what she did on Saturdays because I was at synagogue and felt left out. My friend’s mother yelled at my mom that night and cancelled our sleepover.

I remember more horrors that I couldn’t hide from my children. These memories make the six-year-olds I teach in Pittsburgh fear themselves.

I’m angry they made us forget.

And this is all I can remember.

Ami Weintraub lives in Pittsburgh, PA. They are a religious school teacher at local synagogues and the founder of Shulayim L'Shalom - a youth group for queer, Jewish teens. They are a contributor to RAYJ (Rebellious Anarchist Young Jews) and organize for queer and Jewish liberation.