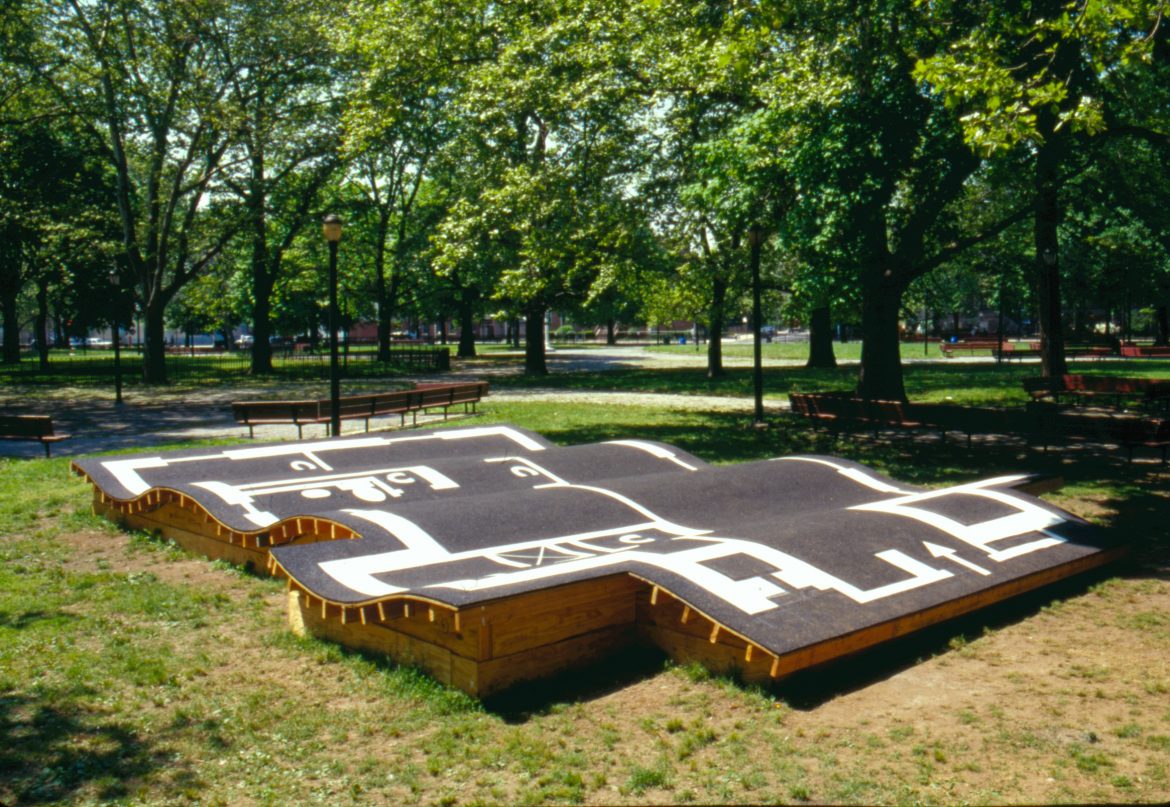 Conceived of by Cuban American artist Maria Elena González and sponsored by the non-profit Public Art Fund, the project centered around a simple, raised platform built from plywood and two-by-fours. Impersonating a piece of playground equipment, the platform was covered in an asphalt-like material and painted with a full-sized floor plan of a typical apartment in the nearby Red Hook East Housing projects; its rippled appearance simulated a magic carpet in flight. The idea was that it might transport kids (or kids at heart) in their imagination, away from their usual surroundings of empty warehouses, decaying docks and subsidized apartments.

“The purpose of the undulation was to allude to movement,” González told me in a recent phone interview. “The surface was made of the same shredded black rubber tires that are used in children’s playground equipment. Even though it is not asphalt, it reads as asphalt. The blueprint of the apartment was painted with the type of paint that’s used in parking lots; it reiterates the idea of mobility, a driving motif. All of that supports the idea of travel and moving and going places. The title Magic Carpet/Home communicates that you take your home wherever you go. It’s not geographically anchored.”

Today, Magic Carpet/Home can be considered a consummate example of Social Practice Art—broadly described as experience-based art that incorporates human interaction into its methodology—although its appearance preceded institutional recognition of the form by six years. The phrase did not come into standard usage until 2005 when California College of the Arts instituted the world’s first Social Practice Art MFA concentration.

Social Practice Art can incarnate as almost anything—a conversation; a performance; a protest; a collaborative mural; a community intervention—as long as its theoretical basis is rooted in something social.

The initial manifestation of Magic Carpet/Home lasted for six months, concluding its initial run on December 1st, 1999. Afterwards, the platform was broken down and chucked. Yet the idea of the work endured.

“That particular piece had different iterations,” Says González. “I did a second iteration in Three Rivers Park in Pittsburgh.”

González then installed a third iteration of Magic Carpet/Home in Baltimore, and a fourth in South Central Los Angeles in 2003, where it appeared for six months in Ted Watkins Park. The South Central version incorporated the floor plan of an apartment in a housing project in Watts called Nickerson Gardens.

Planners at Los Angeles Contemporary Exhibitions, which co-sponsored that iteration of the piece, wrote, “In bringing the often confined lives and living spaces of the housing units out into the open, Magic Carpet/Home momentarily carries its audience away from daily life to a place where homes and hopes are boundless. Crucial to the project is that the sculpture is placed in a public park where members of the housing project and surrounding communities can have direct access to the work and where it can become part of the community’s daily life.”

Reading those words, it is clear how the roots of Social Practice Art can be located in a host of other art historical positions: the Bauhaus concept of a Gesamtkunstwerk, or all-embracing art form; the Post-War Brazilian Neo-Concrete Movement of the 1960s, which rejected the primacy of art objects in favor of participatory aesthetic phenomena like those exemplified by artists like Lygia Clark and Hélio Oiticica; Nouveau Realism, which, according to French art critic Pierre Restany, sought to bring art and everyday life closer together through a “poetic recycling” of reality; and Fluxus, which favored performative processes over materialist aesthetics.

In the late 1990s, French art critic Nicolas Bourriaud conjoined many of these ideas into a sweeping contemporary philosophy that he termed Relational Art or Relational Aesthetics, describing the field as taking as its “theoretical and practical point of departure the whole of human relations and their social context.”

Magic Carpet/Home transcended Bourriaud’s definition: it combined the fields of painting, sculpture, architecture, performance, recreation and public planning, and blended site-specificity, conceptual imagery, material symbolism, and the necessity of audience participation; the art object—in this case the platform—was fundamentally ephemeral, and yet was also essential to the realization of the idea; it required real world participation from viewers, and yet was also dependent upon imagination to fulfill its purpose, making it simultaneously anti-materialist and concrete.

As illusionistic as a Baroque painting, as abstract as a Kandinsky, as performative as a Pollock, as conceptual as a Beuys, and as practical as a swing set, Magic Carpet/Home embodied the best hopes of its forebearers while pointing towards a more fully humanist communion of art and everyday life.

As with all of the other previous manifestations of Magic Carpet/Home, when the South Central Los Angeles iteration of the project ended, the platform was scheduled to be disassembled and discarded. But then González received an intriguing proposition.

“It’s always been a temporary art piece,” González says. “They have permits for only a certain amount of time. But when the time in LA came to take it down, the son of the man whose name the park bears, Ted Watkins [founder of the Watts Labor Community Action Committee (WLCAC)], had a skateboard park. And at that time he also had a moving company. They literally came to the park, lifted the whole Magic Carpet in one piece and put it on one of those wide load trucks. He said he was going to put it in front of the skate park.”

González never went to see it installed there.

“I have pictures of it on the flatbed, but I don’t know where it ended up,” she says. “But it was constructed so well, I would safely say it could have withstood a good seven years, especially in LA since the climate is pretty mild, unless it was clobbered day in and day out by skaters.”

She says by now, however, it is surely in the dumpster.

“I was just glad that time we didn’t have to pay somebody to come and break it up and throw it away,” she says. “It was wonderful that it got a life after.” 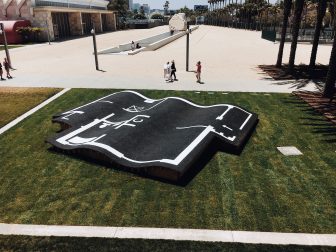 The most recent iteration of Magic Carpet/Home manifested at the Los Angeles County Museum of Art (LACMA) in 2017. After its conclusion, González again hoped someone would re-use the platform.

“I met people who said, ‘Oh sure we really want it!’ Then nobody stepped up,” she says. “They don’t even return your phone calls after. I understand, this is sort of a labor of love, but hey you’re getting something for free that we spent $30,000 making.”

Perhaps, however, it’s all the better that Magic Carpet/Home survives only in the imaginations of those who have experienced it. That might even be essential to the concept of the piece.