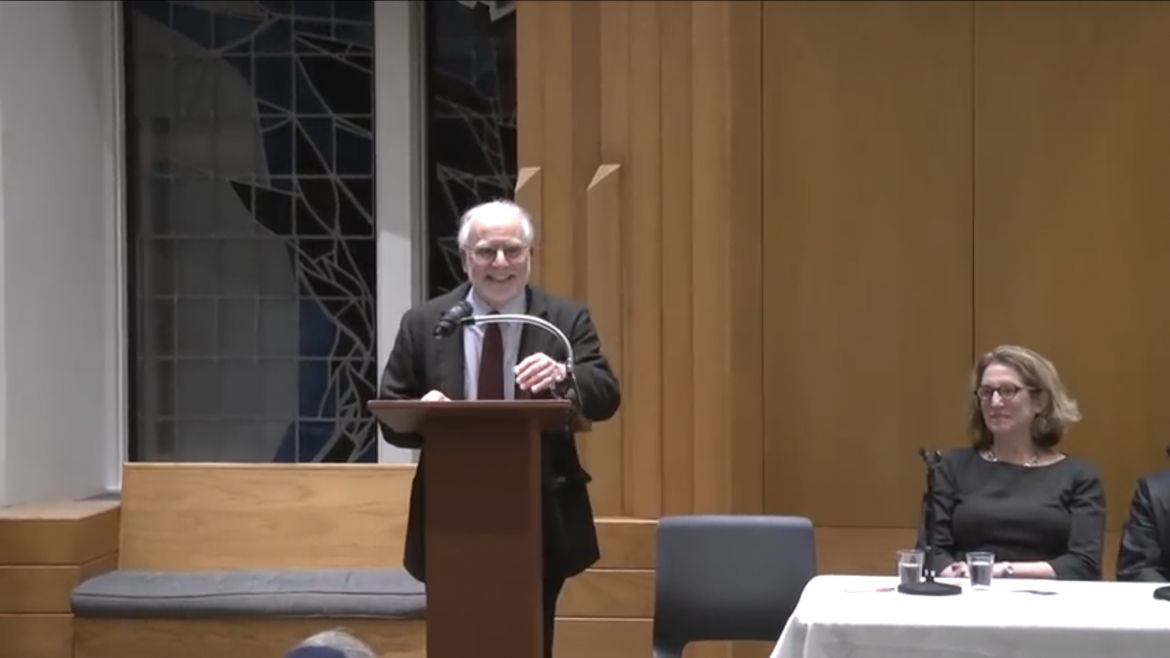 It’s a great personal pleasure and honor to be here this evening and to participate in a celebration of Professor Eitan Fishbane’s new work of scholarship, The Art of Mystical Narrative: A Poetics of the Zohar.  I have followed Eitan’s work closely over the years, including this particular grand project nearly from its beginnings.  And I’ve had the good fortune to co-edit a book with him, and to collaborate on other scholarly projects, including a volume of essays that I’m currently editing.  I hope that Eitan’s parents—who are also friends—won’t mind if I share a little of the nachas that so richly accompanies the occasion.

It is hard to know where to begin to talk about Eitan’s work.   This is the case not merely by virtue of its length, but more importantly by virtue of its extraordinarily ambitious and vast conceptual, intellectual, and substantive scope.  Needless to say, the notion of summarizing its contents is beyond my fifteen minutes.  That said, Eitan himself does a perfect job of this in a concise way at the end of his book, and I want to quote the opening paragraph of his concluding remarks.  It serves to convey to us the essential nature of his work, and I hope it will help our audience gain a small sense of what is at stake here.

In this book I have studied the Zohar as a work of literature, seeking to understand the ways in which this corpus should be appreciated not only as a masterpiece of Jewish thought, theology, and exegesis but also as a great achievement of the Jewish narrative imagination.  Presenting a poetics and morphology of zoharic storytelling I have approached the text less from the vantage point of the history of ideas, and more through the phenomenology of literary forms.  In short, I have set out to read the Zohar through the eye of the literary critic, employing methodologies anchored in the terrain of narrative studies, hoping to see new horizons through the nexus of religion and literature.  What is more, I have argued that the Zohar should be recovered as a pillar of Jewish aesthetics, of the dynamic relationship between narrative art and the mystical imagination.

I wish to draw attention to the words “hoping to see new horizons” in this statement.  Works of scholarship are sometimes referred to as “path breaking” or “pioneering,” and often this language is more hyperbole than it is fitting.  But there is no hyperbole in calling Fishbane’s work path breaking.  I say this not necessarily to offer praise, but rather to make an important point about the book.  Nothing quite like this work has been written.  In his introduction Eitan appropriately acknowledges and reviews earlier kabbalistic scholarship that has ventured into similar territory as his own.  In a completely gracious manner, he recognizes the important work of others in helping him imagine and think through his own project.  Indeed, the book is in very significant ways a lively conversation with other distinguished scholars, in this country and Israel.  But in my view, Eitan’s “hoping to see new horizons” has been altogether realized in this work of great originality.  That is to say, the sweeping scope, the broad intellectual frameworks, and the conceptual and methodological sophistication that Eitan has brought to this project, will enable readers to see new horizons for many, many years to come.  As is true of genuinely important works of scholarship, I have no doubt that it will generate much new scholarship in its wake.  It will not just be endlessly cited; it will inspire others, especially those new to the field, to view the Zohar and certain other works of Kabbalah as works of literary art.  It is, in other words, door opening.  In this connection, Fishbane aptly notes that kabbalistic scholarship has begun to join biblical and rabbinic studies, among others, in forging literary approaches to religious texts.

On the Question of the Appeal of the Zohar

One of the very most central questions underlying this project for Eitan has to do with how the Zohar appealed to so many, in so many different places across the Jewish world through the centuries.  What is so compelling about it that it alone joined a very small group of canonical Jewish religious texts, if not for all Jews, then certainly for a great many.  Fishbane navigates this question in various ways, including raising the question of what it means to be or to become a classic work of literature.  In the case of the Zohar, it is precisely its various poetic qualities—that help us make sense of this appeal.  Let me quote a few words by Eitan on this question:

There is something sublime that is revealed in a great work of art—a transformation of consciousness that allows, perhaps even requires, each reader to re-fathom its depths . . . With regard to the Zohar, we might say that the poetic image or symbol incarnates an ineffable dimension of Being, evoking the mystery and meaning of existence through the eruption of the beautiful.  .  .   . I suggest that it is this very event of wonder and otherworldly Presence, that most vividly account for the power and hold it has exerted upon its readers throughout the generations.

Of course, all this begs the question as to how exactly the Zohar manages to rise to this level.  Much of The Art of Mystical Narrative is, in effect, in the service of responding to this question about the appeal and reception of the Zohar.  The particular nature of the Zohar’s poetic language; the dramatic and emotional intensity of its narratives; its mysterious figures who implausibly emerge as repositories of profound wisdom; its sense of wonder and spontaneity; its dialectical tension between the concealed and the revealed; its fictional imagining of the geography of the Land of Israel; its employment of a rich and often fantastically fanciful Aramaic; its fictive setting in the time of Rabbi Shimon bar Yohai; its journeys into magical realism; its endlessly rich array of images and mythologies; its openness in embracing the mysteries of evil, and of the erotic; the mystery of a multi-limbed, gendered God; its ethical and interpersonal sensibilities; all these and more are grist for Fishbane in scrutinizing the question of the Zohar’s appeal, all through the lens of narrative theory and criticism.

I believe it’s worth noting that historically there was no single way in which the Zohar exerted its appeal.  When we examine the historical development of Kabbalah in the wake of the Spanish expulsion, what we see is a gradual dissemination and relative popularization of Kabbalah—especially the Zohar.  What had once been strictly esoteric, only transmitted in closed circles from teacher to disciple beginning in the 13th century, over time became more widely accessible.  This occurred in significant part through the printing revolution in the middle of the sixteenth century in northern Italy, with two competing editions of the Zohar published at just about the same time in Cremona and Mantua.

With respect to the Zohar, different communities in different cultural settings related to it in various ways.  For example, Middle Eastern Jews believed that simple daily recitation of the Zohar—without necessarily studying its meaning—was a critical form of ritual devotion.  North African Jews believed that just having a copy of the Zohar in their home, or in the synagogue, would protect their families from harm.  Some festively celebrated the Zohar at the grave of Shimon bar Yohai at Meron on Lag Be-Omer.  Others heaped upon it commentary after commentary, expanding its very scope, while in 18th century eastern Europe portions of Zohar were rendered into the Yiddish vernacular for women and so-called “ordinary men.”  Reading Eitan’s book makes me wonder how the narrative features of the Zohar that form the subject of his work played a role in the different ways in which the Zohar became so important to so many.

It is, of course, a matter of great paradox that a work originally defined by its esoteric nature, eventually became the prerogative of greater and greater circles of individuals and communities. What happens when an esoteric work, replete with the features mentioned above, becomes more familiar and more accessible?  Does it retain the mystery and wonder that lies at its heart?  Speaking of our own time, what happens, for example, when it is translated into English?  In the era of Daniel Matt’s magnificent, poetically rich translation of the Zohar, does the Zohar lose some of its mystery, or does it retain it?

On Deploying a Narrative Lens

As we have seen, the essence of this book is in its study of the literary and narrative strategies of the zoharic text.  Fishbane accomplishes this by way of deploying an impressive array of theoretical and methodological questions and approaches.  In addition to purely literary ones, including comparative literature, he casts an exceedingly wide net, drawing upon all manner of fields of study: history, philosophy, linguistics, and comparative religion, among others.  But with respect to his primary methodological toolbox, the justification, so to speak, for employing literary analysis in a text such as the Zohar is premised on the confidence that asking questions of this type will open up the text in ways that would otherwise not be possible; it is a way of seeing the text through a very particular lens, enabling us to get inside the text in a distinctly intimate way.  It seems to me that to do this well requires a heightened psychological and interpersonal astuteness, insofar as deconstructing a complex story involves viewing it from the different points of view of its protagonists.  It requires, as it were, seeing the world as others see it.

The breadth and depth of The Art of Mystical Narrative is such that it manages to represent the state of the art in Zohar scholarship as a whole.  A careful reading of this book invites the reader not only into the colorful world of the Zohar, but also into the complex and interesting world of kabbalistic scholarship about the Zohar and related subjects.  Just about every scholarly question currently contested among Zohar scholars, as well as new discoveries, new subjects of inquiry, and much more, find their way into Eitan’s work.  The notes alone are a treasure trove, pointing the way to multiple worlds of scholarship.  It may seem an usual thing to say, but there is an instinct for thoroughness and comprehensiveness to Eitan’s approach to his scholarship that is striking.   I’m tempted to say that for those seeking to come up to speed on the past thirty years or so of Zohar scholarship, it could serve as one-stop shopping!

Finally, I want to add a word about the manner of writing in this book.  It is an example of pure scholarly writing that is at the same time marked by an evident appreciation, excitement, and warmth towards its subject.  This is a delicate thing to do well, and Eitan has done it with great elegance.

When I say that this is a brilliant book, I mean it in the literal sense of that word, namely, that it is, indeed, full of great light.

Eitan, it is a pleasure to wish you yashar ko’ach on this truly great achievement; may you go from strength to strength.