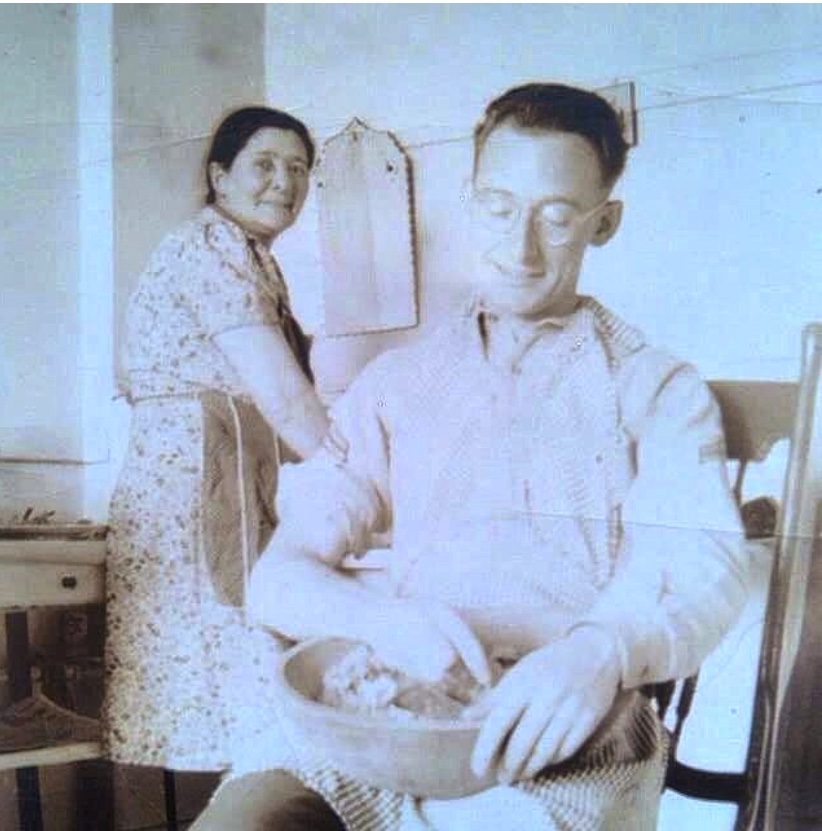 The author's father and Bubbe in Miami Beach.

In this past election, the Jewish community in Florida, particularly its older Jews, were caricatured in unflattering and inaccurate ways. The images of older Jews who needed to be persuaded to vote against Trump, and assertions that Jews in Florida, particularly older Jews, were more conservative than elsewhere, were simply not rooted in fact. This mischaracterization serves to feed into a cardboard portrayal of older Jews in Florida that diminishes the richness of their life experiences, perspectives, personalities and intellect, and interests.

I believe these misperceptions are rooted in ageism as well as a lack of respect for our elders that is all too common in many Jewish communities. I know there are other reasons for assumptions about Florida’s Jewish (and not only Jewish) voters, including its voting patterns and the reality of Florida as a conservative state with a Governor whose views are very much aligned with Trump, as well as (mis)perceptions of the South and Northern elitism. But Jews in Florida live in largely Democrat-voting areas, and the fact is that Florida’s Jews—both older and younger—voted in line with the national Jewish average (majority voting for Biden). So why this particular focus on Florida’s older Jews as a problem?

I was taught by my parents, in particular my father, to revere our elders. He treated the elders in our family with tremendous respect and their well-being was always a priority for him evidenced by the amount of time we spent visiting them and making sure they were well cared for. We would also spend a lot of time down in South Beach hanging out with, and listening to, the conversations among the older Jews who had come mostly from Eastern Europe, and when I asked my Dad what the Yiddish conversations, and often yelling, were about, he would laugh with such pleasure and tell me they were continuing arguments from the old country about the benefits of socialism vs communism. His love and appreciation for them and for their lives was contagious.

But I soon learned that many of the older Jews in Miami Beach weren’t always revered or treated with such respect. When I worked during my high school years in a bakery in South Beach, many of the patrons were older Jews. It was not unusual for someone to come in and spend 20 minutes picking out some bread or some rugelach as they told me stories about their lives, their experiences living through or escaping the Holocaust, their families, and the books they were reading. Many told me they’d love me to meet their families when they came down to visit. Those visits sometimes didn’t happen and others were few and far between. While they spoke to me of the pride they felt in their successful children, the loneliness and sense of longing for their families didn’t escape me.

This brings me to years later. Numbers of Jews I know in New York and elsewhere have expressed a negative sense of older Jews in Florida as a result of their very limited experiences visiting their parents living there or of hearing stories from others about the “old Jews” there. The stories told were often of older Jews living in condos, playing cards, focusing on what seemed like superficial things, and I’ve been told by many who made such visits that they couldn’t wait to leave. The grandkids often would have fun swimming in their grandparents’ pool and playing shuffleboard with them. When I tell people that I moved back to Miami Beach, I often hear some variation of “poor you,” and when I probe further, their image is often a unidimensional and over-generalized one based on these visits or on stories they heard.

While I appreciate that this view isn’t universal and I also don’t want to minimize people’s own experiences, I am concerned that the negative connotations associated for many with these visits--or with hearing about these visits or even with seeing skits on TV making fun of Florida’s older Jews--can translate too easily into broad caricatures of Florida’s older Jews as bumbling old people who couldn’t be trusted to vote (or think) the right way. The older Jewish population in Florida is as multilayered as older people are elsewhere. Many Jews in Florida—young and old alike—are engaged in a wide range of social justice issues ranging from labor organizing and immigrants' rights to justice for the Palestinian people and challenging white supremacy and anti-Black racism.

What do I think about all this? I guess I’d ask my fellow Jews outside of Florida to look a little deeper at whether these negative perceptions reflect a lack of respect for our older population, and, likely, some unfair assumptions about who Florida’s older Jews are in their fullness. Some of my richest experiences growing up were with South Florida’s older Jews, and for that I will be forever grateful.

Donna Nevel, a community psychologist and educator, grew up in South Florida and has been living there again for the past four years. She is a Jewish social justice activist who recently (and proudly) became part of the 65+ generation. Her most recent piece on Florida’s Jews and the elections can be found here.