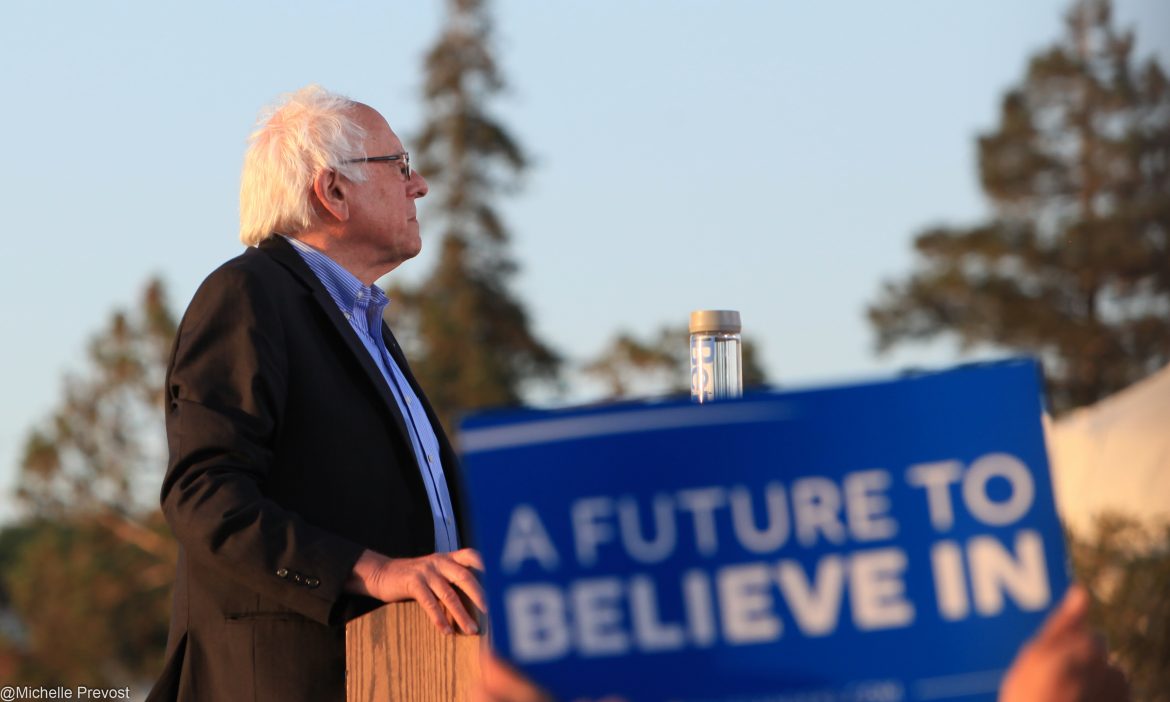 [Editor's Note: Tikkun, a 501(c)(3) organization, absolutely does not endorse, participate in, or intervene in any political campaign on behalf of (or in opposition to) any candidate for elective public office. The views expressed herein are those of the author alone.]

With Sanders tied for first place in the Iowa caucuses and now heading into the New Hampshire primary leading in polls (alongside Pete Buttigieg), centrist and liberal Democrats have reacted with mounting alarm, seeing the Vermont senator's avowed "democratic socialism" as a dangerous liability that could doom the party's chances against Donald Trump.

Few Americans, in fact, know what socialism is, thanks largely to the political Right, which for years has confusingly referred both to Soviet-style, totalitarian Communism and to President Barak Obama's health care plan as "socialism." However, the socialist position is straightforward enough: it is that capitalism is by nature a coercive and unjust system, one inimical to human happiness and freedom, and therefore must be replaced by a more equitable set of social arrangements, using democratic means.

I identify as a socialist simply because I don't see a more reasonable position to take.  After five centuries of capitalist development, we have been left with a winner-take-all civilization in which one out of two human beings live on two dollars a day, and the richest 26 people own more wealth than the poorest 3.8 billion. In addition to inflicting terrible suffering on countless individuals, these inequities have meanwhile hollowed-out our democratic and civic institutions, amplifying the political and social power of the few at the expense of the many.

Is there anyone who seriously believes that Jeffrey Epstein, Bill Cosby, or Harvey Weinstein would have been able to evade the law for as long as they did, had they not been rich? Or that a hairdresser or steelworker wields as much influence in the Congress as, say, Bill Gates, or General Electric? We all know that this is just "how things are done." But that doesn't make it right.

Inequality and corruption of our democratic institutions, though, aren't the most lethal aspects of the capitalist system. Because capitalism reduces nature and other living beings to the status of mere things—raw material for the production of an endless stream of cheap commodities—the planet's ecological order is now in freefall. Global warming is accelerating, because governments have proved incapable of challenging the corporate interests that gain from dumping increasing amounts of carbon into the atmosphere. We are meanwhile living through the greatest mass species extinction event in over 60 million years. Thanks to capitalist development, half of the wild animals of the earth have died in just the last forty years alone. Capitalism is literally destroying life on earth.

We tried capitalism, in short, and it didn't work out. It's therefore time to develop a new mode of development, one in which the resources and institutions of society are managed by and for the many, rather than the few.

Okay, but isn't this what Bernie Sanders is saying too? Actually, no. It's not. While Bernie rails against the injustices of capitalism, he never calls for abolishing capitalism.  Instead, he calls for higher taxes on corporations and the rich, more robust social benefits for working people, and sustainable environmental policies (a Green New Deal). Even Sanders' most "radical" policy proposals are mainstream and even ho-hum in capitalist Europe, with free or nearly free college education and universal healthcare considered normal in places like Germany, France, Sweden, Denmark, and Norway. Even Boris Johnson, Britain's new arch-conservative Prime Minister, has vowed to protect the nation's single-payer healthcare system (if only to placate members of the British public, who are fiercely protective of their National Health Service).

Policies to provide the citizenry with basic social protections have a name, and it isn't socialism, but social democracy. Social democracy is essentially a "heightened" form of liberalism. Typically, it takes the form of a public pension system, universal health care, protection of unions, and generous welfare benefits. While social democrats seek to curb the excesses of corporate power, they preserve the system of private property—that is, a commodity system and wage market in which workers must sell their labor power to members of a propertied class that buys it. Socialists, by contrast, seek not merely to reduce the inordinate influence of the rich, but to eliminate its underlying basis in the fundamental division of society into haves and have-nots.

Though Sanders' proposals represent a meaningful departure from "business as usual" within our polity, they don't add up to socialism. Sanders' proposals are even less radical and far-reaching than the policies instituted by Franklin D. Roosevelt in the 1930s. Roosevelt wasn't a socialist, either. Though he curbed the power of Wall Street, signed the Social Security Act, and created the Works Progress Administration, Roosevelt resisted calls to nationalize the banking system, and he remained a staunch anti-Communist until the end of his days. Capitalism thrived in his wake.

It is passing strange, then, to see centrist and even liberal Democrats reacting to Sanders' candidacy with alarmism and Red-baiting. Last week, for example, the liberal critic Michelle Goldberg, writing in the New York Times, described the prospect of a Sanders White House as "terrifying"; similar sentiments are ricocheting widely across the media, promoted as much by Democrats as by Republicans.

It is especially bizarre to see many of the same liberals who portray Sanders as a "terrifying" extremist nonetheless enthusiastically throwing their support to Elizabeth Warren, even though the platforms of the two candidates are virtually identical. As the Wall Street Journal observed last year, "the main difference between the two concerns their presentation and political rhetoric," not their policies. "The main difference is that Mr. Sanders admits he’d raise taxes on the middle class, while Ms. Warren ducks the question."

So why is the Democratic establishment up in arms about Sanders, but not Warren? The reason, surely, is to be found in the candidates' starkly different views of the existing funding structure of the Democratic Party itself. Sanders, who has run his campaign on small donations and has refused large-scale contributions, has accused the Party of being captive to monied interests, and he has made clear his intention to do some serious house-cleaning at the DNC if he wins the election. By contrast, Warren has been careful to avoid antagonizing the Party leadership, and she has moderated her attacks on the wealthy patrons who constitute the Party’s traditional financial base. Is it surprising, then, that elites in the Democratic National Committee have come to view only Sanders' candidacy as an existential threat?

But in persecuting Sanders, the Democratic Party leadership may once again be cutting the party's own legs out from under it, just as it did in 2016. Sanders continues to radically outperform his nearest opponents in fundraising, and he has built up a ferocious grassroots base, one as ardent and unwavering as Trump's own. As a populist, Sanders may indeed be the only Democratic candidate this year who could compete effectively with the president on his own ground—by laying bare the hypocrisy of Trump's supposed love of Der Kleine Mensch. It seems like folly, then, for leading Democrats to write off Sanders as "unelectable," simply because he characterizes himself as a "democratic socialist" rather than as a liberal.

For myself, I plan to vote for Bernie in my state's primary. Not because I think Sanders is a socialist (he isn't), nor because I think he'll magically solve the nation's problems (he won't).  Rather, I plan to vote for Sanders because he has shown the courage of his convictions. And because he may be our last best chance to slow the rising Trumpian tide. For now, socialism can wait.

John Sanbonmatsu is Associate Professor of Philosophy at Worcester Polytechnic Institute, and is the author of The Postmodern Prince.