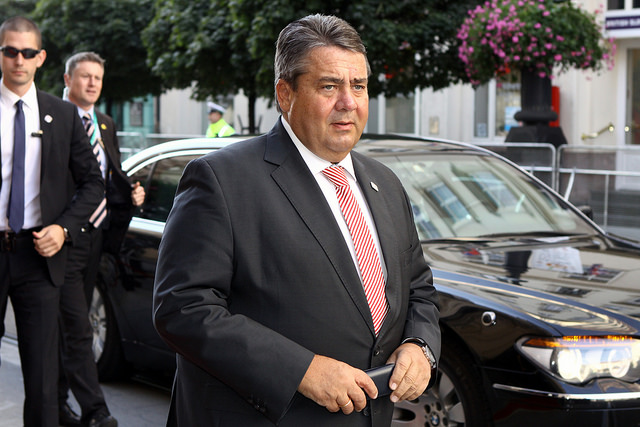 After nearly six months of haggling uncertainty the three-party German coalition puck is in the goal box. The suspense is over, the chickens have come home to roost! And this coop will again be ruled not by a rooster but a hen, for the fourth time in a row, and a tough old hen she is!

Not a few feathers have been ruffled. Until January 2017 stout Sigmar Gabriel was head of the Social Democratic Party (SPD). Because of the party’s disastrous popularity nosedive he was shoved out, but given the prestigious job of foreign minister as consolation. Martin Schulz succeeded him as party leader, chosen by an amazing, unanimous 100% vote, and there was an equally amazing upward swoop in the polls, followed, just as quickly however, by a belly flop. The voters, even in his own party, soon mistrusted his empty, vague promises.

The election results last September were the worst in over fifty years for the SPD; Schulz, its tarnished leader, swore loudly that his desperate party would not remain an out-powered, losing junior partner to Angela Merkel’s Christian Democrats anymore but would restore its strength in opposition. Then this big loser backed down and tried, wily as in any shell game, to join a new coalition cabinet with himself supplanting Sigmar Gabriel as foreign minister. This personal coup was on February 7th, but his sleight of hand didn’t work; no-one wanted him. On February 9th Schulz had to resign from that job and on February 13th step down as party president. The final agreement was managed without him while both he and Gabriel are now banished into a chilly German limbo.

Schulz was replaced by Scholz, Olaf Scholz, till now SPD mayor of Hamburg. Then he too left his brief spell as party boss to Andrea Nahles, once an SPD left-winger (long, long ago!), and climbed higher into the new Cabinet, becoming Vice-Chancellor with Merkel and also Finance Minister, the powerful job in economics policy, not just for Germany but for Europe. Scholz is remembered in Hamburg for his insistence on forcing emetics down the throats of supposed drugs smugglers, despite doctors’ objections, EU condemnation and a death in one case. Also for causing a total snafu during the G-20 summit last summer and defending the actions of 92 policemen accused of physical brutality during the demonstrations. In an earlier Cabinet position he helped get pension age raised from 65 to 67. Above all, he detests the LINKE party. It seems all too clear what to expect from him!

Although the SPD kept floundering in opinion polls, currently at 18 %, Merkel needed it to obtain enough Yes-seats in the Bundestag to stay in power. She found it necessary, therefore, to treat it generously, so that SPD members would vote “Ja” in their referendum. They did, with a 2/3 majority, and were rewarded by Merkel with six Cabinet posts, while her CDU took seven and three went to her  Bavarian sister party. The SPD now holds two of the four most important posts, Olaf Scholz as Finance Minister and, as prestigious Foreign Minister, the SPD politician Heiko Maas, until now Justice Minister and whose ideas on foreign policy – if any – are as yet hardly known.

The head of the Bavarians, Horst Seehofer, finally pushed out of control in his own fiefdom in Munich, was consoled with the very important Interior Ministry in Berlin, in charge of police, surveillance and immigration, with an added new “Heimat”(Homeland) sub-department, a sop to those who want to keep Germany very German, with as few foreign-looking immigrants or refugees as possible. Some wonder if in four years Seehofer will have everyone wearing lederhosen or a dirndl, with a big crucifix on every official wall.

The cast of characters has actually been greatly changed. Only four previous ministers have been kept on, but in general with new, different cabinet jobs, as in the game of Musical Chairs (but hopefully not joining Donald Trump in that other variant of the same game, Going to Jerusalem). Ten are newcomers, from all three parties, now with seven women (out of sixteen). Most interesting to Berliners is Franziska Giffey, only 39, also SPD, until now mayor of the West Berlin borough of Neukölln, a mixed area with a large proportion of Turkish, Arabic and other immigrant groups. The media stress how cheery and pretty she is; her politics, as Minister for Families, Seniors, Women and Youth, like those of the other newcomers, remain to be seen.

There are omens enough on which winds will be blowing. The former Environment Minister, Barbara Hendricks, who courageously countered VW and the powerful automobile lobby on their criminal Diesel emission scam, is out. Sigmar Gabriel, who dipped and ducked on many issues as Foreign Minister but was almost the only speaker at the recent Security Conference in Munich to call for easing sanctions against Russia and deal diplomatically, not bellicosely, on questions like the Ukraine, Syria, and the horrifically perilous deployment and maneuvers of NATO troops, including Germans, right on the sensitive Russian border near the Baltic Sea. As mentioned, Gabriel is also out.

The only Cabinet Minister to stay in the same job as before, aside from Chancellor Merkel, is Ursula von der Leyen, and she is the most dangerous. Like some top politicians in the USA and Britain, male and female, she is not interested in diplomacy, she is interested in more and more and more weapons, the most modern to be found, and planting them as provocatively as possible, and as close to Moscow. That this clever-talking war hawk has kept her job does not bode well for the new government, nor for general world hopes for a cooling off of swiftly-growing dangers! Not easy with a Theresa May, an Emmanuel Macron and a Mike Pompeo, to name a few.

With all three ruling parties now remaining in office, and with the SPD struggling to retain its traditional position as second party in the polls, my strained metaphor of chickens coming home to roost might be applied to the growing strength of some very hungry, dodgy foxes. The Alternative for Germany (AfD), now with 92 delegates in the Bundestag, is taking advantage of every sign of dissatisfaction in Germany, and there are many of them, with the same growing gap between the extremely wealthy and the struggling and poverty-stricken as in the USA and elsewhere. The AfD also favors a militarily powerful Germany, it too is aligned with the wealthy. But that is behind the scenes, while its clever speakers strum social-minded, almost melodic melodies at times, but never without an ongoing background percussion of hatred against “Islamists” and all immigrants and refugees, a sentiment echoed all too often in the tactics of the other parties, hoping to be spared further losses to the right. One AfD leader overdid it recently; his vicious attacks against people of Turkish descent were so racist that he had to resign. But his views were visibly well-received by his audience.

Sadly, the AfD is filling the gap caused by well-founded distrust of the old parties, bringing worried recollections of developments in Germany about ninety years ago. I greatly fear that the LINKE, though holding on to its faithful but all too stagnant nine or ten percent, with only very thin gains, is not filling that gap as it should, but is seen by too many, in eastern Germany, as part of the establishment. It has been too mild-mannered, too hopeful of possible future coalition positions, like those already achieved in two East German states and Berlin (but with not enough to show for them). I find it lacking in a militant, daring policy of streetside action. Unfortunately, it seems caught up, far too much, in internal dissension on its leadership level, especially between co-chair Katja Kipping and co-caucus chair Sahra Wagenknecht. There is disagreement about how many immigrants or refugees should be allowed into Germany, about acceptance or rejection of support for Netanyahu’s rule in Israel and the Palestinians, about policy towards Russia and about the possibilities of forming some larger force, beyond the ranks of the LINKE in a path resembling that of Jean-Luc Mélenchon in France, which Wagenknecht favors and other leaders oppose. It is urgently necessary for the party congress in Leipzig in June to resolve differences and move towards united, popular opposition to current wars and threats of worse wars, and to poverty, in Germany and in all the countries whose refugees seek asylum and a decent life in Germany.

There have been some militant strikes in recent months, some are still going on. Can they help in developing healthy antidotes to foul-egg policies of the new government? Can fences be strengthened against marauding foxes – by nature far from being peaceful vegans? Can trends be reversed? Europe and the world urgently need some changes!