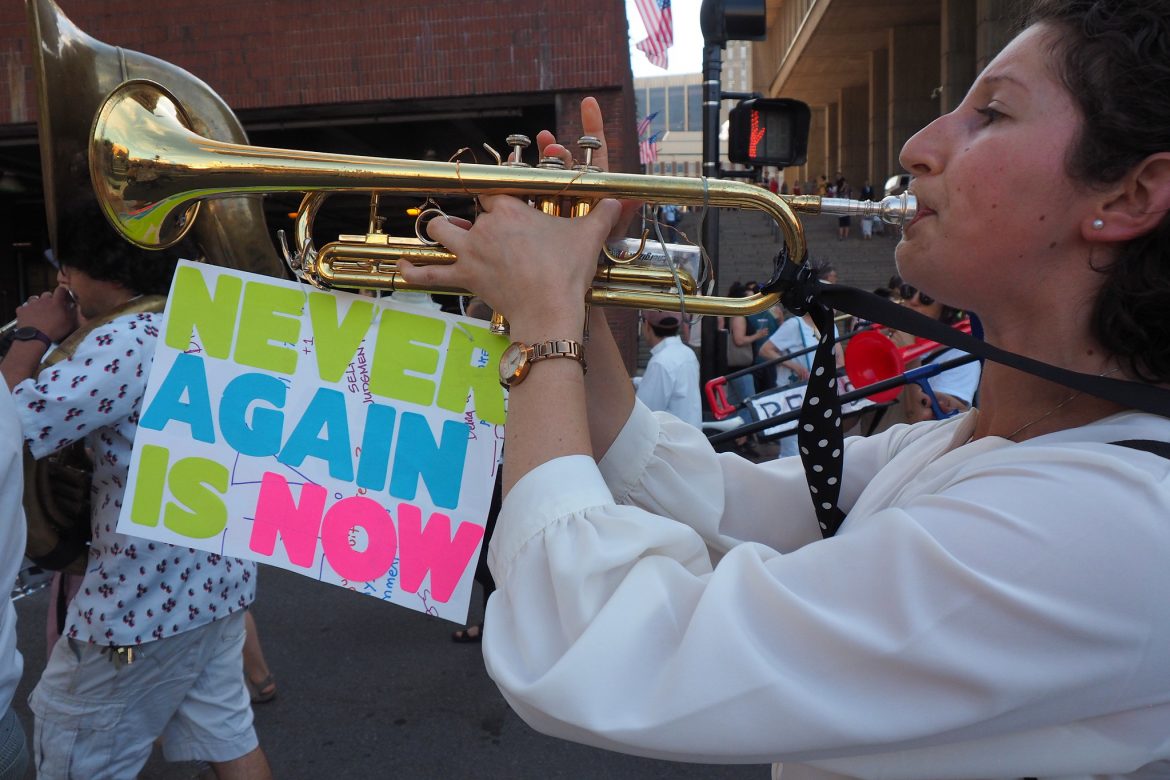 I am folding laundry and listening to music when my mother calls, interrupting the calm midday moment. She asks me how I am doing, but her voice is tense. I ignore the greeting:

“How is Grandma Nancy?”

“She… she had a flashback. I think it’s because of the dementia.” My mom’s voice is strained.

I inhale sharply. “What happened?”

“It was evening, and she was lying down in the bedroom. She started moaning. I went to her, and—” My mom’s voice cracks. “—she started screaming. ‘Momma! Pappa! No!’ She was shrieking and grabbing at something far away, and then she was sobbing.” I hear my mother’s voice catch on the other end of the phone.

My mom keeps talking. “I started crying with her, and I lied down with her, and we both cried, and she kept yelling for her parents and then for her little brother. And I knew that she was there, in the carts…”

Since the decades following WWII, the Holocaust represents a major event in the Western public imaginary. The Holocaust is not only part of the national memory of Israel, but also of the United States, as Trump illustrated in his most recent State of the Union address. He paraded around two WWII soldiers and a Jewish-American concentration camp survivor. Trump’s address, seemingly anachronistic, lauded American military morality and might, American dedication to “Israel and the Jewish people,” and decried socialism. The speech was a reminder of the Holocaust’s political clout and of the manipulation of Jewish trauma for nationalist ends.

I was reminded of Trump’s State of the Union these past few weeks, as political leaders have weaponized a debate about the term “concentration camp” to distract from the already deadly and worsening conditions reported in detention facilities for children and adults who have come to the United States seeking asylum.  The recent manipulation of Holocaust trauma, alongside the growing state-sponsored terror campaign against the eleven million undocumented humans in this country, takes the knife of the Shoah, still buried deep in Jewish collective consciousness, and twists it.

Outside of national memory, the Holocaust—obviously—is intensely personal for those who lived through it or whose lives emerged out of it. At this point in time, there are few remaining Holocaust survivors and their descendants are left grappling with the remnants of tragedy in historical proportions. Intergenerational trauma between first- and second-generation Holocaust survivors has been well documented, and historical trauma has been shown to exist (both psychologically and epigenetically) in third generation survivors as well. The legacy of the Holocaust manifests in complex and often hidden ways: strained family relationships, multiple generations of mental illness, or in inexplicable silences, to name a few. My grandmother, Nancy, survived concentration camps Auschwitz and Buchenwald for over a year and was liberated at age 16. She died about a month ago, and her funeral was held on what would have been Anne Frank’s 90th birthday. My grandmother’s memory of the moment she was separated from her parents and little brother haunted her—and my immediate family—since the day she and her family arrived at Auschwitz in a cattle cart.

I grew up with the phrase “never again” planted deeply into my being. I learned from a young age that the Holocaust did not begin with death camps. Death camps sprung from concentration camps. Concentration camps grew out of dehumanizing rhetoric and the slow but steady stripping away of human rights from Jewish communities. I learned that the Holocaust was enabled not only by fascist leaders and their foot soldiers, but by millions of Germans, by civilians who were busy living their lives and keeping their heads down. It is these lessons, not standardized, nationalized memories of American glory and exceptionalism, that have led me and hundreds of other Jews to block ICE detention centers over these past few weeks, risking arrest and doing our best to amplify the voices of immigrants who are living through what our ancestors lived through. There is a mass atrocity going on in this country, and we understand viscerally that trauma inflicted today will ripple down through generations.

It is because of the lived realities of those personally affected by the Holocaust, and not its symbolic and semantic place in American political life, that Jews are taking action across the country right now. We are not only calling for an end to violent policy harming immigrant communities. We are also calling for the eradication of the roots of this policy: dehumanization that has become commonplace, lack of basic rights for immigrant communities, and the willingness of our neighbors and elected leaders on both sides of the aisle to look away. We know that the problem is not isolated to the border camps. ICE raids, mass detentions, and family separations are happening everywhere. The Never Again actions that have brought over three thousand people into the streets over the last week have targeted detention centers that are thousands of miles away from the border in order to point out the omnipresence of the crisis. Never again is everywhere, and never again is now.

I interviewed my grandma Nancy once when I was eleven, and it was then that I first learned some of the details of my family’s history. What stood out to me was her stopping at memories of a few individuals—an aunt who snuck her and her sister bread when they were at Auschwitz, the nurse who cared for her when she was moments away from death at liberation, the family in Sweden who took her and her sister in after the war. It was the actions of a few individuals that allowed my grandma to survive. My grandma rarely spoke about her experience publicly, but when she did, she did so while calling for others to value diversity and to stand against injustice. She spoke in front of a public school in 2001, where she explained that, “A second later would have been too late for thousands of prisoners, including probably too late for me. A second can make a difference. And one person can make a difference. If we want a future, let us keep teaching that differences in culture, religion, national origin do not deprive nations, they enrich them.”

Michaela Caplan is a Jewish organizer and writer based in Boston and New Hampshire. She is an activist with Never Again Action. Twitter: @MichaelaCaplan3.