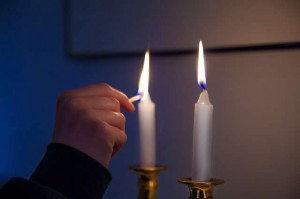 My grandmother’s grandmother, Helen, fled
the Pale of Settlement when she was twelve.
With two silver candlesticks weighing down
her pockets, she crossed one continent, one
ocean to a distant land of promise,
to America. She made a life
and home from scratch (from a ball of wax and
matches) in Roxbury, Massachusetts
where she bore many sons and bore my own
great-grandmother who bore my grandmother
who bore my mother who still polishes
Helen Landie’s two silver candlesticks.

Have you ever seen the Ernst Lubitsch film
To Be or Not to Be? A comedy
about a troupe of Polish actors who
escape German-occupied Warsaw by
dressing up as Nazis—in a strange way
it encapsulates the fate of Jewish
actors and other objectors to the
führer who fled the Rhine for Hollywood.
Werner Klemperer was Colonel Klink for
six years; Casablanca’s Major Strasser,
Conrad Veidt, married a Jude, named himself
one too, and so was banned from German films.

I have my grandmother’s blonde curly hair,
her blue-green eyes, her pale peach skin, and I
have heard (again and again), “You can’t be
Jewish.” A stranger on the train: “But you’re
so beautiful!” A college classmate: “I
didn’t know, I haven’t told you any
Jew jokes, right?” When I was ten, I saw a
swastika in chalk drawn on the sidewalk
on my way to school; at home, in bed, a
nightmare came and came again: my mother
with the dark hair, olive eyes and skin was
hauled away, and I was left without her.

The story goes: a group of Jewish men
(Hasids known for ecstatic song and dance)
were lined up to be shot and ordered by
their executioners to sing. One man
offered, “Lomir zich iberbetn,” or
“Let us reconcile”—he sang alone. Then
a voice rose up from somewhere in the crowd,
“Mir veln zey iberlebn!” or “We will
outlive them!”—one voice became many like
a spark that starts a wildfire. They sang, “Mir
veln zey iberlebn, iberlebn,
iberlebn!” and they went out dancing.

I married a Jewish man under a
chuppah, and we retreated to the woods
for our yichud. Alone together and
holding each other, we watched the sky turn
purple as a bruise. Later, opening
our wedding gifts, we found a pair of glazed
ceramic candlesticks in that same deep
broken-blood-vessel hue. And though neither
of us grew up with the tradition (or
much religion, really), every Shabbos
we light two candles in our candlesticks
and sing, alone together, at sundown.

For the bodies on the ground, cry eicha!
For the innocent gunned down, cry eicha!
As before, today we mourn, cry eicha!
We will outlive them, but not all of us.

Jay Eddy  is a Jewish writer, composer, and performer who splits her time between New Haven, New York, and Maine. She was recently named a Playwriting/Screenwriting fellow by the New York Foundation for the Arts, and current works-in-progress include: ME AND HIM AND HIM, her second solo album, a pop-music meditation on living with trauma; Block, a Jewish adaptation of Hamlet featuring a mix of original music and Yiddish folk songs; and a collection of 365 sonnets written in one year. You can read, watch, and hear a selection of her work at jayeddy.com.