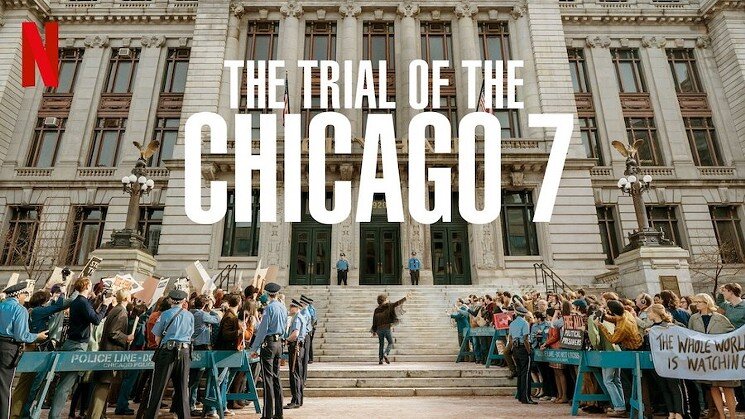 'The Trial of the Chicago 7' poster

“The Trial of the Chicago 7,” the new film on Netflix that is number 3 in the country at last view, will introduce a whole new generation to the extraordinary events that took place in and around the Democratic Convention in Chicago leading up to the 1968 presidential election. Both the Vietnam War and the anti-war movements were at their height at the time of the Convention, and the protests/“riots” that took place in the parks and streets of Chicago were dramatized as conflicting moral and political world-views in the famous trial that is the subject of the movie. The government lawyers under the direction of newly-elected president Richard Nixon and Attorney General John Mitchell brought the case against Tom Hayden, Abbie Hoffman, Bobby Seale and others in order to define the meaning of the event itself as identical with what they charged the defendants with: “conspiracy to cross state lines with the intent to start a riot”.  Their aim was to conduct a solemn trial in the august chambers of the State in which the full majesty of the courtroom, the flags, the photos of Founding Fathers on the walls, and the empaneled jury of twelve men and women good and true were to decide knotty questions of law and fact such as whether the defendants actually met as a conspiracy and whether the requisite intent was present to start a riot. To resolve these knotty questions, the existence of the Vietnam War that was killing Americans and Vietnamese every day the trial was taking place was irrelevant…legally irrelevant and to be excluded altogether from the public moral understanding the events at the heart of trial itself.

Realizing this, the defendants and their lawyers William Kuntsler and Lenny Weinglass had to fight to conduct the trial in a way that would convey a different narrative—that what had taken place was a valiant, even heroic protest by the youth of country against an unjust and immoral war, a protest that was viciously silenced by the guns and batons of the State through the agents of Mayor Daley and the Chicago Police Department. This defense required two distinct “disruptions”: the first was to break through the normal deference shown to the symbolic authority of Judge Hoffman and “his” courtroom, the solemn proceeding, the legalistic vocabulary, the assigned roles in the pre-constructed government drama. That first disruption was necessary to make watchers from all over the country realize that they too should not automatically defer to the Authority of the State, a deference that was in significant part responsible for the ongoing conduct of the war, including official narrative that “we” were stopping evil communism from taking over the world (the “domino” theory accepted by my father and millions of other fathers and prevalent at the time). And in the service of this first disruption, Abbie Hoffman on one occasion cartwheeled into the courtroom; he and defendant Jerry Rubin openly made fun of the stodgy and quite nasty judge pre-empting his own rulings against them (“overruled!” they would shout before Judge Hoffman could rule on their own lawyers’ objections); and Abbie refused to give normalizing answers to even simple questions on the witness stand: (Example: Prosecutor, “What State are you from?” Abbie, “Woodstock, It’s a state of mind”). Let us call this part of the defense deconstructing the imaginary authority of the State and replacing it with the power and community and spirit of the movement as an alternative collective reality and source of moral truth.

The second disruption required of the defense was to somehow put the War on trial, to transform the narrative meaning attributed to the events that were the basis of the trial so that people could perceive what happened as young people from all over the country coming to a major political convention to protest (not “riot) in opposition to a murderous and unjust, even pointless, war. This required shifting the focus on what was articulated and heard through the testimony as involving not knotty legal questions about “conspiracy” and “intent to cross” a “state line”, and not as rowdy and violent behavior by a bunch of hooligans, but as a serious moral protest of injustice by the next generation, who were themselves dying in large numbers in the war, exercising their First Amendment Rights. And one way the film beautifully captures that second disruptive effort is in Tom Hayden’s final statement when the judge allows him to speak for the defense following their convictions.

And here is the fascinating thing: although the defendants were convicted at the end of the very long trial according to the government’s narrative about conspiring to cross state lines to start a riot, the defendants’ counter-narrative actually won the day in the court of public opinion and caused a significant, palpable shift in the national consciousness about the legitimacy of the Vietnam War. This is the power of high-visibility political trials—they dramatize contemporaneous collective events and enable lawyers and clients working together to contest the meaning of those events in the name of Truth. For the reason that William Kuntsler and Tom Hayden and Abbie Hoffman were ultimately successful in the battle over meaning was that their side was telling the truth, and truth dramatically revealed spilled out into the consciousness of the American people—not in a simple or instantaneous way but as a ripple of awareness that played a part, an important part, in undermining the legitimacy of the war and its 55,000 American and 3 million Asian dead.

In the following article written now long ago by Paul Harris and myself—“Building Power and Breaking Images: Critical Legal Theory and the Practice of Law”—Paul and I show how all legal cases are in some way political in this fashion in that they provide an opportunity to make the true moral meaning of human action visible in public space. We show how this can occur in high-visibility, low-visibility and supposedly “non-political” cases, with the hope of helping not just lawyers, but readers of all kinds, to see the inherent politics of law, and the opportunity that every struggle for justice in public space provides.

Building Power and Breaking Images: Critical Legal Theory and the Practice of Law