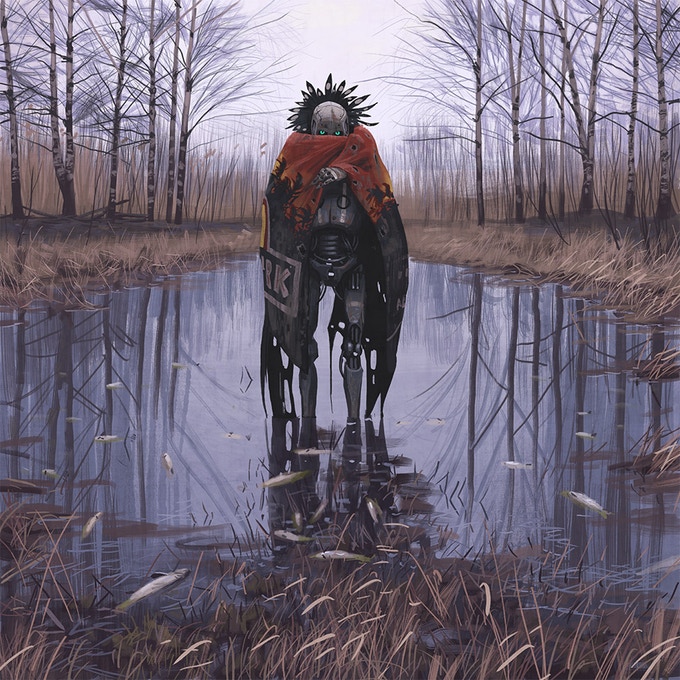 The Vagabond for Simon Stalenhag

We seem to be standing still,
but we are actually moving,
and the fantasies of phenomena
are sliding through us
like ideas through curtains.

These lines from the 13th century Sufi poet, Rumi, could serve as a concise description of the new Amazon streamed series, “Tales From the Loop.” In these pandemic days, marked by the confrontation with illness, death, and human loss on an unprecedented scale, with disruption of our normal experience of time, with interrupted and unexpected reconfigurations of relationships, and with reliance on sometimes unfamiliar technologies to fill in the gaps of our hunger for human connection, this series provides a timely meditation on how we, despite surrealistic circumstances, find meaning in our lives. It could not have come at a more opportune time.
Created and written by Nathaniel Halpern, and directed by Mark Romanek (with other guest directors including Jodie Foster), the series is based on a 2014 art book of the same title, by Simon Stalenhag, which counterposed strange mechanical constructions and abandoned robots in the middle of Swedish countryside, the fantastic in the midst of the mundane. The series cinematography (Philip Messina and Jeff Cronenworth) is beautiful, and is enhanced by the haunting music composed by Paul Leonard and Philip Glass.

The “Loop” refers generally to an underground research facility, the Mercer Center for Experimental Physics, located in the fictional town of Mercer, Ohio. More specifically, the “Loop” refers to a massive black sphere at the center of the facility. In his introduction to these “tales”, the founder and CEO of the facility, Russ (played by Jonathan Pryce) explains that the purpose of this structure and of all the surrounding research is to explore the nature of the universe, and to “make the impossible possible.” But the series, which unfolds as an anthology, is, like the best science fiction, less about the research and technology and more about the people in the Loop’s surrounding community. Mercer is essentially a company town, and everyone in the town either works at the Loop, is a family member of a Loop employee, or supports the work of the Loop in other ways, providing food, power, education. Regardless of their relationship to The Loop, all are affected by it, be they adult or child, scientist or custodial worker—their lives, their desires, their longings, their dreams and fantasies, are all shaped and altered by the mysteries of the underground research. It does not take long to realize that beneath these stories of miraculous occurrences is profound commentary and a psychologically astute exploration of the issues that keep us awake at night—issues of mortality, of loneliness and loss, of the meaning of soul, of our relationship with our own younger selves, our relationships with our parents, our children, and, above all, our need for connection with those we love.

We need your support to bring the kind of analyses and information Tikkun provides. Click here to make a tax-deductible contribution.

The stage is set in the first episode, when a young girl, eager for acceptance by her mother, a scientist at the Loop, must confront her mother’s inexplicable disappearance. This episode immediately brought one of my own traumatic childhood memories to the front of my consciousness—when I was five years old I went to the library with my mother. When I looked up from the book I was holding, my mother was nowhere to be seen. In panic and fear I ran home, hoping to find her, only later to find that she had never left the library. In the episode, the girl is comforted by her encounter with Loretta, a woman who also works at the Loop, and who turns out to be the adult version of the girl herself. Such time-bending is just one of the ways The Loop affects this community. The adult Loretta, played beautifully by Rebecca Hall, becomes a central character in this anthology, and one whose childhood loss of her mother profoundly affects her relationship with her work and with her own children. Is it not the goal of most psychotherapy to enable patients to encounter their childhood selves and comfort the traumas endured? How I would have loved to have taken that five-year-old ‘me’ into my adult arms and reassured her that, though her life course would not be changed, everything would work out, and that it would eventually feel safe to let go of fears of abandonment.

In another episode, one of Loretta’s sons, Jakob, and his friend, both young teenagers, encounter a strange object in the nearby forest. This object allows them to exchange identities. This episode, which evokes the biblical story of Jacob’s selling his birthright to his brother, explores our frequent tendency to be dissatisfied with ourselves, and to compare ourselves unfavorably with others, to envy another’s perceived superiority, only to find, in the end, that who we are is exactly who we are supposed to be.

The remaining six episodes, all inter-related through the characters, are similarly evocative of profound psychological and spiritual issues, and they will affect each viewer in unique ways, depending on their life experiences. Each in their own way will resonate with issues around the meaning of death, of love, of alternative life possibilities, of kindness and tenderness in the midst of a confusing world. The episodes, wrapped in stories of space and time alterations, alternative realities, and mechanical and technological constructs, coax us into considering the time stopping nature of love, the imagination of what might have been had a romantic fantasy actually occurred, how we might see our future selves, and how we ourselves may be altered by our interactions with technology that seemed impossible a few years ago, but now seem to be a necessity of our daily lives.

This series reveals the existential questions with which we all grapple. The stories occur in a universe marked by distortions of time and space and cosmic uncertainty, one in which fantastic phenomena appear commonplace—and that universe seems not so different from the one in which we now exist. “Tales From the Loop” provide a way of seeing ourselves and our relationships, as we allow our consciousness, memories, and imaginations to swirl around us, tempered and altered by the incursion of technology in our lives. Maybe I am making too much of this, and my excitement at seeing some quality TV has eroded my critical sense. Maybe. But it occurred to me that perhaps, in the end, The Loop represents us, we imperfect humans, individually, collectively, and globally. That this pandemic with all its unimaginable consequences “sliding through us like ideas through a curtain”, has accelerated the evolution of our consciousness, and moved us to an awareness of our interconnectedness with all things, as we try to make the impossible possible.

Martha Sonnenberg, MD, a member of Tikkun's Editorial Board, is a former chief medical officer, a certified physician executive, and an infectious disease specialist. She is currently a consultant in issues of quality and safety within hospitals, and in developing medical leaders.