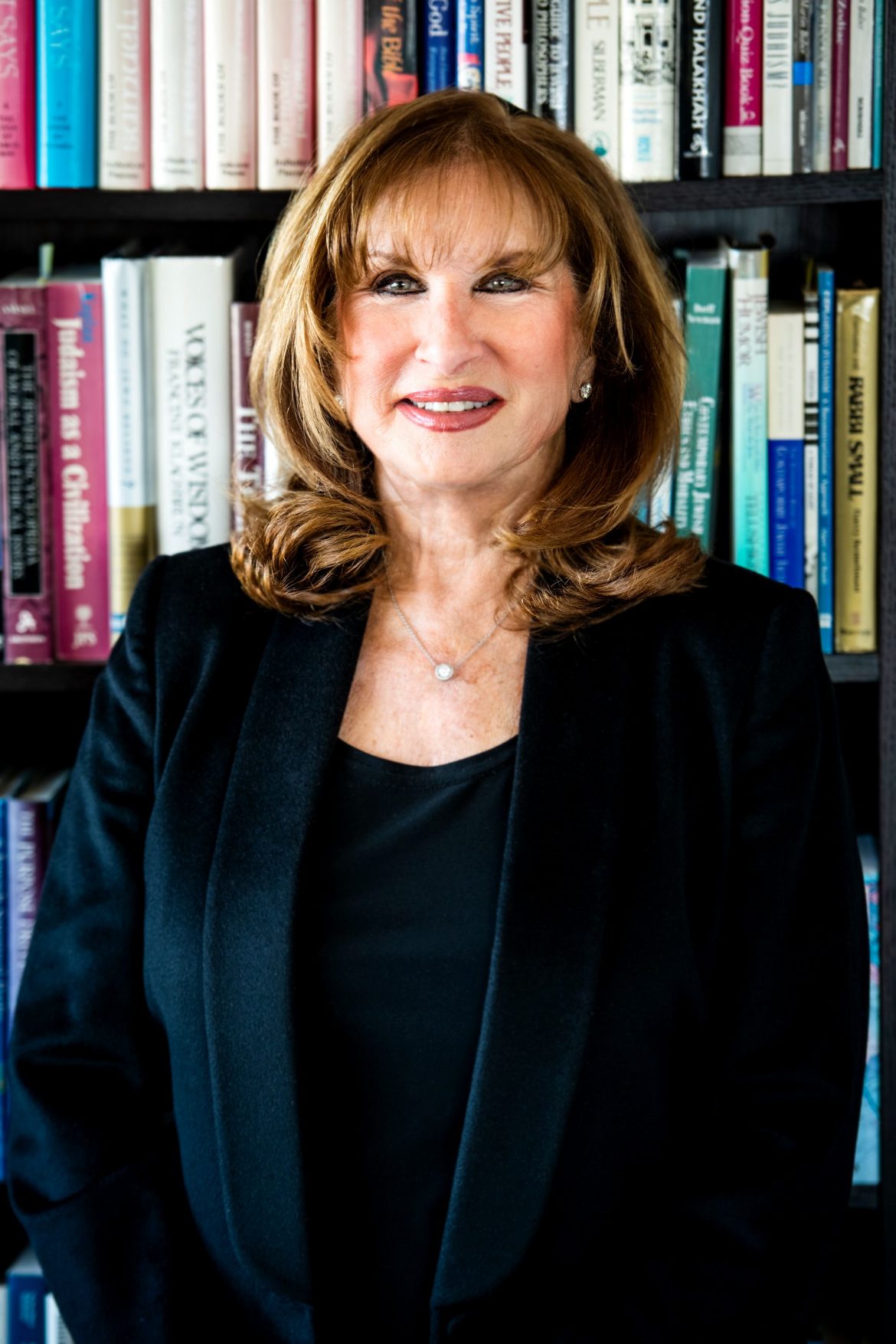 Lynnda Targan, wife, mother of two, community volunteer, sometime journalist, public relations professional and indefatigable seeker of wisdom, decided in mid-life that she wanted to become a rabbi.  In her engaging new book, Funny, You Don’t Look Like a Rabbi: A Memoir of Unorthodox Transformation, she describes how her ever-deepening connection to Judaism and Israel blossomed into an urgent calling and propelled her into a decades-long, often agonizing, nearly thwarted, pursuit of study with the ultimate goal of ordination.

Born in 1948 in Reading, PA, the author’s youth was scarred by the infidelity of her father and the divorce of her parents — at a time when Jews viewed a “broken” family as a shanda — and her dislocation, first to Brooklyn where she and her sister lived in poverty with their depressed mother, then as a teen to Philadelphia to live with her father and his hostile second wife, who treated Lynnda like a maid.  At 20, she married her devoted high school beau whose relatively early success in the textile business provided her with a life of privilege while she earned a B.A. in English and Education from Temple University, suffered two traumatic miscarriages, gave birth to two premature babies, mothered them wholeheartedly, and also worked outside the home, eventually founding her own P.R firm.

The memoir shifts into high gear in 1983 with her adult bat mitzvah and the launch of her journey of feminist self-discovery and intense Jewish learning. Epiphanic trips to Poland and Israel trigger a seismic spiritual awakening, then Hebrew immersion at Gratz College and Hebrew University, an ulpan in Netanya, a Masters in Liberal Jewish Studies at Gratz, another M.A. from Gratz, this time in Jewish Communal Studies, part-time classes at the Reconstructionist Rabbinical College, text study with private teachers, clinical field work, internships, fellowships, culminating in matriculation at the Academy for Jewish Religion, the New York seminary at which she was ordained – ecstatically – 20 years after her adult bat mitzvah and two months shy of her 55th birthday.

En route to this triumphant denouement, Mrs. Targan’s intrepid struggle to become Rabbi Targan is pocked with frustration, adversity, and loss. She vividly describes feeling mired in isolation and self-doubt and demoralized by sexism and ageism until, in 1997, she suffers the ultimate soul-crushing derailment for a woman with her sense of calling when her formal application for admission to RRC’s rabbinical program is rejected.  Devastated, she suspects it was punishment for an article she had published in the Philadelphia Jewish Exponent about a brilliant feminist theologian at RRC, a piece that the president of the College had insisted to Targan made the school “appear too alternative, and therefore, perhaps not appealing to mainstream Judaism.”

In disbelief that an institution associated with progressive Judaism could be so dismissive of a woman with her unquenchable love of Torah and intense desire to serve her people, Targan polls members of the admissions committee to learn why she’d been rejected. No one mentions her article. Finally, she goes to the dean who admits that they had turned her down because, “In the end, none of them could image you as a rabbi.”

One might say, Oh, well, that was more than 20 years ago, a different time. Yet 20 years ago it would have been inconceivable for the same institution to tell a comparably dedicated male Jew who was pushing 50 that he was unacceptable because they couldn’t “image” him as a rabbi.

The sad truth is that, to this day, many women are still hobbled by image issues. For openers, ask yourself to conjure “a rabbi,” and be honest about the gender of the figure who flashes in your head.  Google “image of a rabbi” and up pops endless photos and drawings of men in beards, payot, wearing tallitot, kipot, t’fillin, black hats, and pictured near a menorah, Torah, or shofar. Among the first hundred or more male images, I saw only three photos of women, both shown in business clothes with no religious garments or ritual objects in sight. The third woman, unnamed, is wearing a tallit and standing before an open Torah scroll. But she is identified as a member of the “Messianic Jewish Ministry,” otherwise known as Jews for Jesus.

If you’re a pulpit rabbi, regardless of gender, you’ll work six days a week, Friday nights, Saturdays, and all the Jewish holidays. You’ll be on call 24/7, answer to trustees and big donors, many of whom presume to know as much as you do and blithely dictate how you could perform better. If you’re a woman with a pulpit, chances are your challenges will multiply exponentially. Congregants you interact with or who merely observe you at a distance will feel free to criticize your skirt length, neckline, shoes, hair style, and speaking voice. Because you don’t “look like a rabbi,” some will doubt your capacity to project authority and command respect as a shaliach tzibbur (prayer leader). Others will find it hard to take direction from you or to heed your advice and counsel simply because your image doesn’t fit their stereotype.

In the nearly five decades since the non-Orthodox denominations began ordaining women – more than 1500 by now — I’ve been astounded by the indignities to which many of them have been subjected.  Sexual harassment, of course (rarely has any woman escaped that scourge), plus all the inbred biases and career deficits born of our culture’s unconscious or unacknowledged assumption that patriarchy is part of the natural order. No wonder it’s still possible for a woman to graduate with honors from rabbinical school and demonstrate outstanding pastoral talents yet routinely be passed over by search committees at larger congregations (defined as more than 250 member units); be paid tens of thousands of dollars less per year than her male counterparts; receive fewer health and retirement benefits; get stalled in a small community, or in a junior role at a big shul, while less stellar men move on to positions of ever greater prestige and power.

The devaluation of women rabbis can be as subtle as an oversight or as glaring as a STOP sign. Calling a woman by her first name (Rabbi Hannah), though her male predecessor was addressed by his last name, may seem trivial but it says something about the implicit status of each clergy person. When a JCC mounts a program on, “Halacha and Homosexuality,” or, “Should Rabbis Talk Politics from the Pulpit?” and all five rabbis on the panel are men, the optics alone reinforce the entitlement of male voices to speak authoritatively on issues important to the Jewish community. Perhaps the most flagrant violation of female dignity in recent years was embodied in 2007 by Newsweek’s list of “America’s Top 50 Rabbis,” of whom only ten were women.

Despite all those dispiriting realities and the many road blocks she describes in Funny, You Don’t Look Like a Rabbi, Lynnda Targan succeeded in realizing her aspirations. However, her book explains why, rather than take a pulpit, she has chosen to be a community rabbi (hired to officiate at life cycle events from baby namings to funerals, and to deliver High Holy Day sermons). As a teacher, co-founder of The Women’s Midrash Institute, and facilitator of outreach to interfaith couples and unaffiliated Jews, she seems to have made good use of her natural ebullience, empathy, and passion for Jewish life and learning.  And, unlike some rabbis I’ve known who posture as perfect, she is refreshingly honest about her embarrassing gaffes and necessary compromises.

“Though I have achieved the title of rabbi,” she writes, “I am perennially incomplete… always trying to improve myself and self-actualize as God’s vessel in the world.”

Letty Cottin Pogrebin, a writer, activist, and founding editor of Ms. magazine, is completing her 12th book, Shanda: A Memoir of Shame and Secrecy. (Full disclosure: Pogrebin is among those mentioned by Rabbi Targan as someone who influenced her development.)