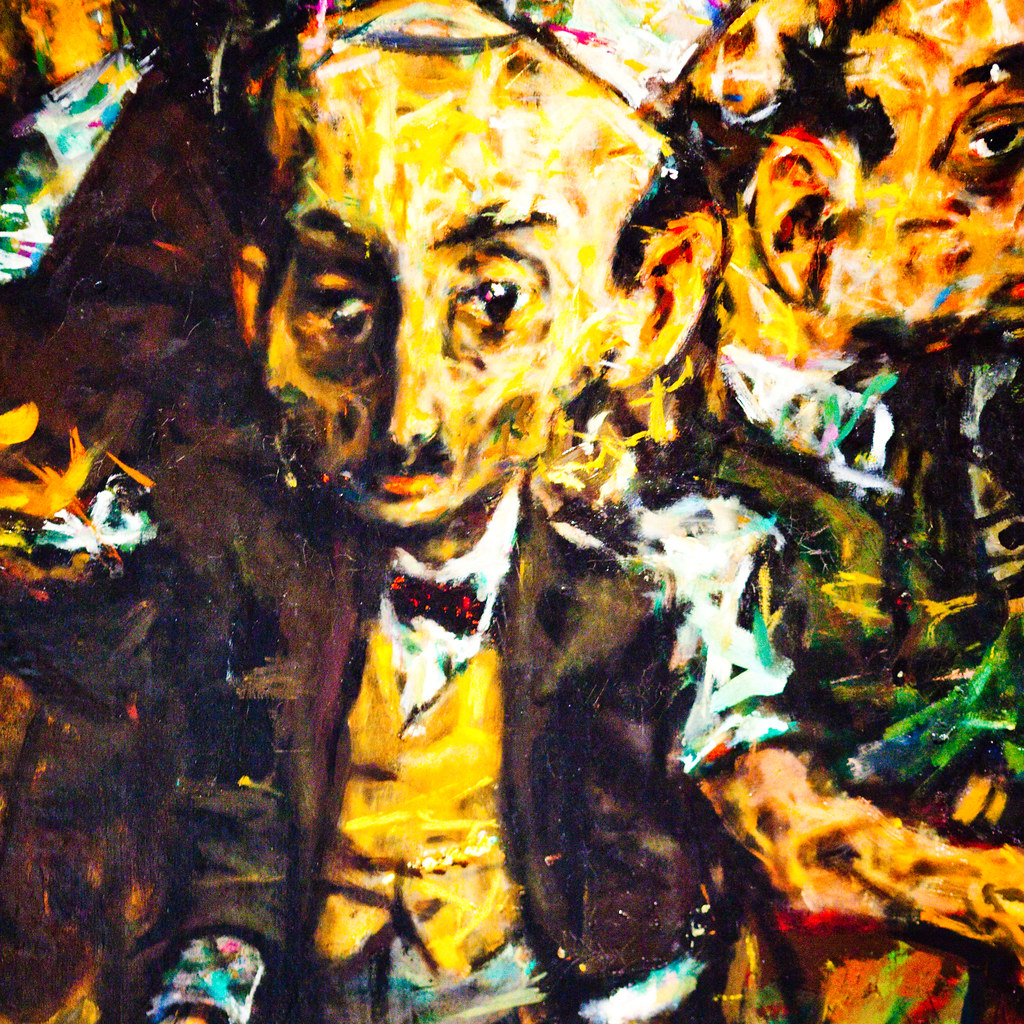 The death of Jack Levine at ninety-five last fall signified the end of an era in American Jewish political art. The last representative of the politically oriented school of art known as American Social Realism, Levine devoted an entire artistic career to depicting his responses to social injustice. Often considered the youngest member of the Social Realists, Levine also regularly used his art to express various features of his Jewish background and identity.

Several of the key figures of that movement, one of the most significant developments of early twentieth-century American art history, also had significant Jewish roots, including Ben Shahn, Willam Gropper, and Philip Evergood. These artists’ legacies and their cumulative works have influenced generations of political artists in the United States and elsewhere throughout the twentieth century and early twenty-first century.  Their paintings, prints, and photographs by Social Realist artists were highly partisan in nature, calling public attention to the major social evils of their times.

Ben Shahn created these screenprints in response to the murders of three civil rights workers in 1964. Credit: cliff1066™

Ben Shahn, for example, began his socially conscious artistic career with a powerfully critical series about the persecution and execution of the two Italian immigrants and anarchists, Nicola Sacco and Bartolomeo Vanzetti. Like many political artists, he also took an active part in the unsuccessful attempt to save their lives. During the Depression, Shahn portrayed the unemployed and homeless with deep empathy and with a keen understanding that their plight resulted from institutional breakdown rather than personal moral failure. His anti-Nazi works during World War II added to his stature and legacy, which continued during the cold war with his artistic assault on McCarthyism and his fervent support for the civil rights movement.

Likewise, William Gropper produced hundreds of politically oriented paintings, drawings, and cartoons during his illustrious career. Sometimes considered the American Daumier, he relentlessly satirized those in political and economic power who used their positions to oppress others and to engage in graft and corruption. His political cartoons for the New Masses elevated that medium to major critical recognition in the visual arts and mobilized working men and women to resist the repressive forces that kept them in conditions of economic and political servitude.

Philip Evergood used his art to document the struggles of working men and women throughout the nation. Among his many notable efforts, his 1937 classic “American Tragedy” — perhaps the emblematic artwork of American Social Realism — documented with cold fury the Memorial Day Massacre where Chicago police shot and killed ten workers who were peacefully marching in protest against the Republic Steel Company. That effort helped galvanize American public opinion in support of the growing union movement.

Jack Levine, almost twenty years younger than many of his Social Realist contemporaries, also has been compared to Daumier (and George Grosz) with his large body of satirical artworks. His scornful treatment of political corruption early in his career set the stage for decades of socially conscious work. His efforts treated, among many other themes, the victims of General Francisco Franco’s fascist oppression in Spain, the stupidity of the U.S. war in Vietnam, and Mayor Richard Daley’s brutality against protesters at the Democratic National Convention in Chicago in 1968.

Other artists, including the Soyer brothers Raphael, Isaac, and Moses, also added a vibrant Jewish voice to this tradition of visual social commentary and criticism. One thing about this artistic movement was clear; these artists unambiguously took sides on the major public issues of their times. They were active partisans, especially on the side of the oppressed — and of labor. They saw art as a weapon of attack, to be employed in the interests of justice, as they passionately perceived it. I have no doubt whatever that all of these artists would have used their considerable talents to join the struggle now waging in Wisconsin, Ohio, and throughout the land. Their artworks would have vigorously embraced the cause of the thousands of women, men, and children who camped out at the State Capitol in Madison, Wisconsin. And metaphorically: from their graves, they are urging their viewers in Wisconsin to circulate the recall petitions and rid that proud state of those reactionary politicians and their corporate backers who would deny working men and women the rights they have fought so hard to earn.

Even though Cold War repression and the pernicious impact of McCarthyism and the blacklist diminished their visibility of American Social Realism, more recent art historical scholarship has made major advances in restoring their critical reputations. Since the late 1960s, several socially oriented art historians have abandoned the exclusive focus on formalism and have linked visual art to the broader historical and political context from which it emerges. Among many others, the late Albert Boime at UCLA gave major scholarly credence to this perspective; his prolific work validated the view that socially conscious art demanded a prominent place in art historical scholarship.  This essay continues that focus by noting how some more recent heirs of Social Realism have added to the large body of Jewish political art.

Jack Levine is only one of the latest of that generation to pass from the scene. Since the turn of the century, four other iconic Jewish artists with links to American Social Realism have died, in essence severing the link to an older tradition of socially conscious visual expression. Leonard Baskin (d. 2000), Leon Golub (d. 2004), Nancy Spero (d. 2009), and just a few months ago, Milton Rogovin (d. 2011), all used traditional artistic forms, including painting, drawing, printmaking, sculpture, and photography to provide trenchant commentary about many of the evils of modern society and politics.  In basic ways, they were the direct descendants of their Social Realist predecessors and they continued the distinguished tradition of American Jewish socially conscious art.

A few observations about all these visual art luminaries both establish this line of art historical continuity and provide a memorial to their individual and collective legacy. All four artists set a qualitative standard for their successors. By focusing on their lives and works, contemporary audiences can more fully appreciate the deeper continuities of Jewish contributions to socially conscious art in this country.

Leonard Baskin, a distinguished sculptor and printmaker, was a major heir of the Social Realist perspective. His politically oriented works joined with his Jewish-themed works to make him one of the premier American artists of the 20th century. Calling himself a “moral realist,” Baskin executed works that addressed such significant post-war problems as the threat of nuclear war, the dangers of McCarthyism and domestic political repression, the Vietnam War, and the human agony and despair arising out of social conflict and misconduct. His portraits of other socially conscious artists added another powerful dimension to his overall work. His 1994 Holocaust memorial in Ann Arbor revealed the depth of his Jewish consciousness, providing yet another reminder of the horrific legacy of Nazi genocide.

Leon Golub was one of the stellar political artists of the modern era. His large-scale paintings of war, violence, racial tension, and torture are unique in the history of art. Until his death in 2004, he was one of the most visible and accomplished descendants of his Social Realist predecessors working in the United States. His anti Vietnam War works properly place him in the panoply of great antiwar artist like Francisco Goya, Kathe Kollwitz, Otto Dix, and George Rouault. But his depictions of torture especially resonate in this era of Abu Ghraib and Guantanamo. His disconcerting images of men who cavalierly abuse bound and naked prisoners are stark reminders of the world we inhabit­­ and of the uncomfortable reality of American complicity in these disgraceful activities. Future historians will find fruitful if disconcerting value in Leon Golub’s provocative artworks.

His late wife, Nancy Spero, is likewise a giant heir of the Social Realist tradition in visual art. Throughout her artistic career, she brought a strong feminist consciousness to her art, advocating vigorously for greater women’s representation in the patriarchal New York art world. Her activism in such groups as the Art Workers Coalition, Women Artists in Revolution, and the women’s cooperative Artist in Residence Gallery in SoHo reflected the spirit of cultural activism of her 1930s and 1940s predecessors. Above all, Spero used such imaginative forms as scroll paintings to highlight women’s histories, especially their abuse in dictatorial regimes in Latin America and elsewhere. She joined many of her contemporaries in her artistic condemnation of the Vietnam War atrocities. And like so many other Jewish artists, she too addressed the theme of the Holocaust in her work, adding further visual brilliance to the unnerving but necessary visual subject matter.

Milton Rogovin's portrait of a mother and her child in Chile. Credit: satiagonostalgico

Milton Rogovin’s recent death at the age of 101 brought to a close the life and work of one of America’s finest socially documentary photographers, justifiably comparable to luminaries like Lewis Hine, Margaret Bourke-White, Dorothea Lange, and Walker Evans. Like those masters, Rogovin saw his work as an impetus for social change. His photographs over the decades were inextricably related to deeper political struggles where artistic effort is inseparable from social and political activism. Rogovin’s sensitive relationships with his subjects both in the United States and throughout the world enabled his viewers to see the human face of oppressed people who have remained largely faceless throughout recent history. His portraits of workers underscored his commitment to the same class struggle that motivated the Social Realist artists of an earlier era. And like them, he too was an activist throughout his long life.  One of the most enduring images of Milton Rogovin occurred in 2005, sitting in a wheelchair, holding a sign reading “Dissent is Democratic.”  No finer legacy to younger generations of activist artists is possible.

Click on the image above to explore an online exhibit of art pieces by the contemporary Jewish artists whom the author mentions.

All these creative Jewish figures have been profoundly influential. The number of contemporary American Jewish political artists is enormous — and growing in the early years of the twenty-first century. Although many American Jewish artists are first-rate painters and sculptors, they often use other art forms like photographs, murals, cartoons, comic strips, installations, assemblages, and posters in order to attract viewers far beyond the narrow confines of elite culture. Their democratic vision of public accessibility directly reflects their view that political artworks should catalyze social action rather than augment the conspicuous consumption of art.

All their efforts are rooted in the earlier tradition of Social Realism; their artistic debts to Levine, Baskin, Golub, Spiro, and Rogovin are enormous and they often acknowledge the influence and art historical significance of these masters.  Although the “last links” are gone physically, they will never be gone spiritually.  Like the old Civil War song “John Brown’s Body,” their souls go marching on.

Paul Von Blum is a senior lecturer in African American studies and communication studies at UCLA and author of a new memoir, A Life at the Margins: Keeping the Political Vision, and a short biography of Paul Robeson, Paul Robeson For Beginners (2013).