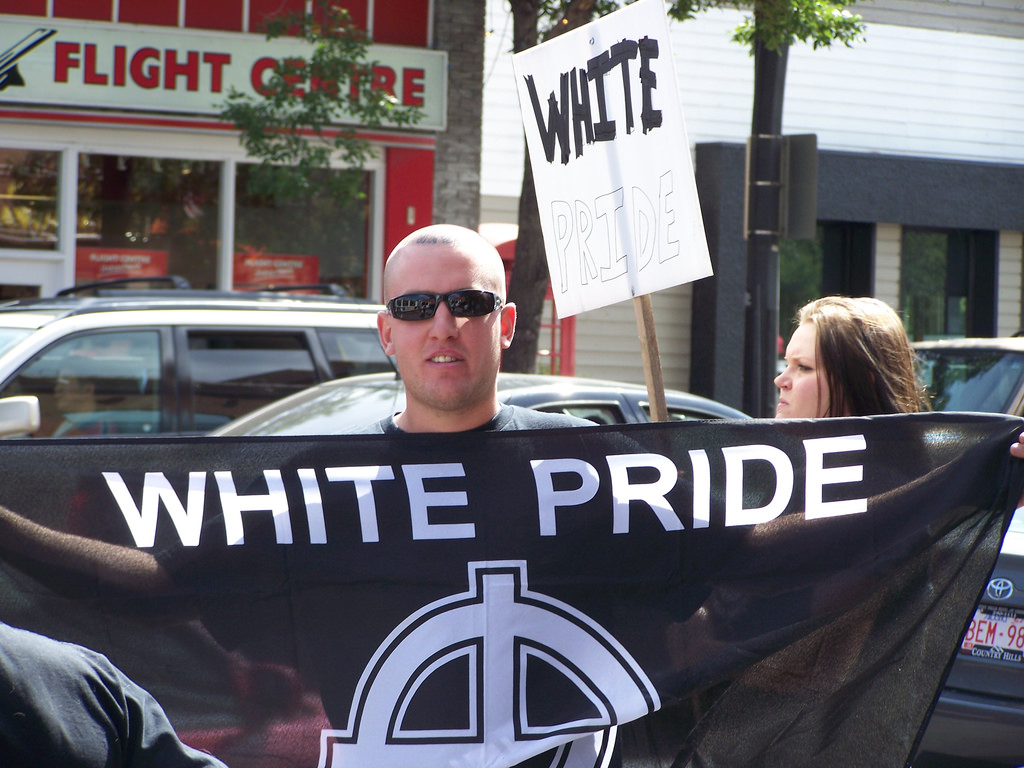 For any white supremacist neo-Nazi who has either grown tired or can no longer find the online video “game,” Angry Goy, where you can murder black people, Jews, and refugees after hearing how “six million” immigrants have arrived in Europe, your options have expanded a whopping 100%.

Now you can download Angry Goy II where on one level you can infiltrate a gay nightclub called “LGBTQ+ Agenda HQ” and shoot the naked gays with their long and erect penises to your lack-of-heart’s content. This is especially for anyone who missed their chance at Pulse in Orlando, Florida in June 2016 where a gunman killed 49 real people.

The video slaughters, attributed to “Wheel Maker Studios,” are openly promoted and downloadable from Christopher Cantwell and his far-right website. On his Radical Agenda site and talk show, Cantwell promotes Angry Goy II in stark terms able to rile up any committed Nazi bigot:

“Angry Goy II is the season’s hit game for White males who have had it with Jewish bullshit. Instead of taking out your frustrations on actual human beings, you can fight the mongrels and degenerates on your computer! Use guns, knives, pepper spray, and more! Lay waste to wave after wave of shitdicks, shitskins, shitstains, and the kikes they serve.”

If that is not enough, another level of Angry Goy II provides white supremacists the rush of blowing away journalists inside their press offices at “Fake News Network.”

Cantwell is now well-known as the so-called “Crying Nazi.” Reporters recorded him weeping in jail to gain sympathy following his arrest as one of the organizers of the infamous Unite The Right rally in Charlottesville, Virginia where marchers carried Tiki Torches and changed Nazi slogans like “Jews will not replace us.” A marcher killed a counter protested with his car.

In the original Angry Goy, according to the British newspaper, The Jewish Chronicle, the game’s opening announcement reads:

“There is only one solution…a Final Solution.”

To “Other” Is A Verb

When any society defines the “other” as less than human, as disposable, as dangerous, as predatory, that society invariably commits acts of violence and in some instances genocidal extermination against those “others,” for “to other” must be seen as a verb, as an action.

and the list continues given the times and the place.

It is not random or coincidental that Angry Goy II centers its violence on an LGBTQ nightclub. As marginalized and often hunted people and having few other places to meet one another, clubs, pubs, and bars have been an option.

Since the early to mid-19th century, a linear history of homosexuality, bisexuality, and gender non-conformity predominately in the West begins with the formation of a homosexual and gender non-conforming “identity” and a sense of community brought about by the growth of industrialization, competitive capitalism, and the rise of modern science, which provided people with more social and personal options outside the home.

It is only within the last 160 or so years that there has been an organized and sustained political effort to protect the rights of people with same-sex and more-than-one-sex attractions, and those who cross traditional constructions of gender identity and expression.

Even before the rise of industrialization, in England there developed the first documented fairly-organized network of men in the West gathering together for company and sexual encounters. From around 1700 – 1830, a series of houses or pubs, later called “Molly Houses,” catering to the needs of these men were established throughout London.

Some of the “Houses” consisted of private rooms in taverns, while others were in private homes. Many of these houses were raided by police, the men tried, and some were executed.

In the United States, homosexuality was illegal until 1962 when Illinois became the first state to decriminalize. In the 1930s, for example, laws banned homosexuals service in licensed bars in New York state. Penalties included revocation of the bar’s license to operate.

In Columbus, Ohio, for example, a law forbade anyone appearing in public “in a dress not belonging to his or her sex.” It was not overturned until 1974. Some laws mandated the wearing of at least three articles of clothing traditionally considered “appropriate” to one’s sex assigned at birth. In addition, the mere presence of homosexuals in a bar constituted a “disorder.”

“The present apathy of the public toward perverts [homosexuals] generally regarded as ‘harmless,’ should be changed to one of suspicious scrutiny. The harmless pervert of today can be and often is the loathsome mutilator and murderer of tomorrow…The ordinary offender [turned] into a dangerous, predatory animal, preying upon society because he has been taught he can get away with it.”

Many believe that Hoover had a “relationship” with his longtime companion Clyde Tolson.

Not until 2003 in Lawrence v. Texas did the Supreme Court strike down remaining laws against consensual adult same-sex sexuality.

Because LGBTQ people had few indoor options other than clubs to congregate, these spaces have been sites of harassment and violence.

What kind of country and what are the conditions that empower people to spray bullets into human bodies at Mother Emanuel AME Church, Tree of Life Synagogue, Pulse nightclub, and so many other places?

What kind of a country and what conditions are conducive to empower people to produce and proudly promote video games like the Angry Goy series?

Warren J. Blumenfeld is author of The What, The So What, and The Now What of Social Justice Education (Peter Lang Publishers), Warren’s Words: Smart Commentary on Social Justice (Purple Press); editor of Homophobia: How We All Pay the Price (Beacon Press), and co-editor of Readings for Diversity and Social Justice (Routledge) and Investigating Christian Privilege and Religious Oppression in the United States (Sense).

Dr. Warren J. Blumenfeld is author of The What, the So What, and the Now What of Social Justice Education (Peter Lang Publishing), Warren’s Words: Smart Commentary on Social Justice (Purple Press); editor of Homophobia: How We All Pay the Price (Beacon Press), and co-editor of Readings for Diversity and Social Justice (Routledge) and Investigating Christian Privilege and Religious Oppression in the United States (Sense), and co-author of Looking at Gay and Lesbian Life (Beacon Press).