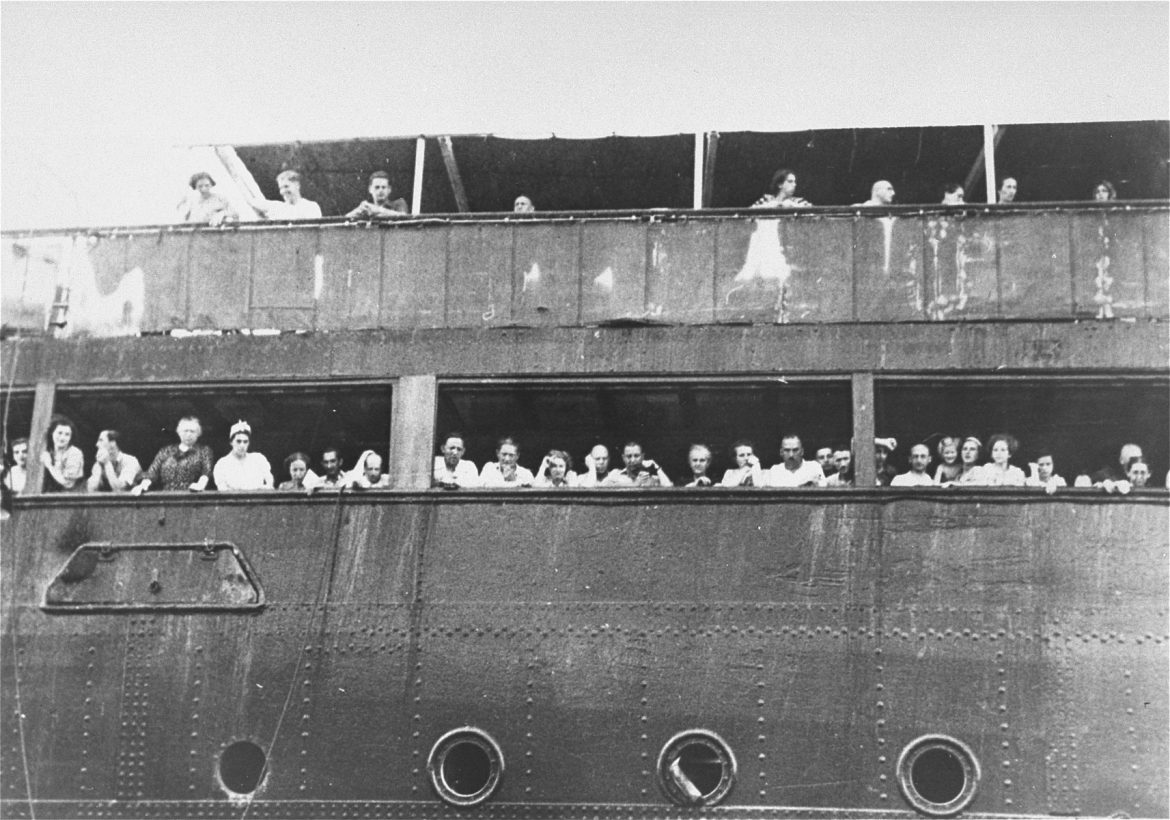 Jewish refugees aboard the MS St. Louis attempt to communicate with friends and relatives in Cuba, who were permitted to approach the docked vessel in small boats. Cuba and the U.S. refused entry to the passengers of the MS St. Louis, who were then sent back to Europe. 254 of the 937 passengers were killed in the Holocaust. Image courtesy of National Archives and Records Administration, College Park.

For a speech in 2019 about the state of the American Union, there was a lot of talk about Jews, and quite a few Jewish cameo appearances, both victims and liberators, and also quite a few Holocaust references (in case we may have forgotten, the Holocaust did not happen in the United States).

Let us remember that Jews make up less than 2 % of the U.S. population. So why all the Jews? I think it is worth reflecting on the “Jewing” in Trump's SOTU. David Suissa in The Jewish Journal (February 6, 2019) wondered why American Jews aren’t more thankful for Trump’s numerous mentions of Jews in the speech. After all, he called out anti-Semitism; he recognized the horrors of the Holocaust; he saluted Jewish immigrants who contributed to American society; he celebrated the U.S. embassy move to Jerusalem. Shouldn’t Jews put aside their negative views of Trump and thank him for that?

I have a different view. First, after trotting out a Holocaust survivor and a Jewish American solider who helped liberate him, my son (who teaches History and Social Studies in an inner-city DC public school) texted our family group chat, “Anybody else confused that we’re still talking about the Holocaust?” What he meant was not “Why are we talking about the Holocaust?” at all, but rather why is Trump in a SOTU speech in 2019 talking so much about the Holocaust? Jews may quickly say that we should appreciate when anyone talks about the Holocaust and the plight of the Jews, and I can understand that. But I think there is something more complicated and even sinister going on here (thank you, Jared). There is a subtle weaponizing of the Holocaust for ulterior motives. Let us not forget it was the Trump White House that two years ago did not mention the Holocaust even once in its public memo on Holocaust Memorial Day.

As I see the narrative the president was constructing, the story goes that the Holocaust gave America “good immigrants” (even though there was considerable suspicion that many Holocaust survivors were communists or socialists, which wasn’t totally false). So when Trump later rallied against Socialism (obvious a gesture to Bernie and company) in my demented imagination I could image the GOP standing and chanting “Hang the Rosenbergs!” “Jews” and “commies” used to be interchangeable terms in parts of the American political landscape (Obama and his “friend” Saul Alinsky). More generally, one theme of this speech was to go back to World War II when the enemy seemed very clear, when good and evil were not questioned; and in that scenario the Jews were the real victims and the Americans were the real heroes (that is really the story of the U.S. Holocaust Memorial Museum anyway). Trump of course seemed to lack any historical perspective about the way many Jewish immigrants in America were treated. But in any case, that was 75 years ago! If we’re going there, why not The Civil War? At least that happened in America! Today, of course, and this is the point, the “bad” immigrants are at the brown people at the southern border, “the rapists and drug traffickers pouring into our country,” carrying their (Muslim) prayer rugs with them. They are the polar opposite of the good immigrants, the Jews. No one told the president of the tens of thousands of Jewish immigrants who entered the U.S. illegally, or with false papers, seeking refuge from war-torn Europe and life-threatening situations, especially after 1923 when the Johnson-Reed act instituted immigration quotas that negatively impacted the Jews.

The same man who now speaks stridently against anti-Semitism said that the Charlottesville protests had some “good people,” and let us remember the anti-Semite who killed 11 Jews in Pittsburgh (who was a racist as much as an anti-Semite) was in part inspired by Trumps anti-immigration stance which he then took out on the “good immigrants,” the progressive Jews, who turned "bad" by supporting the “bad immigrants” of color. It is the same man who speaks regularly to Alex Jones of Infowars or Breitbart news, a venue of the alt-right known for its latent and often overt anti-Semitism. The same man who, when he won the election, David Duke tweeted, “We won!”. Trump wants to have it both ways, he wants to keep the alt-right close and also show how the Jews have been a good immigrant example for America in order to make his case for the “bad” brown folks.

So in response to my friend David Suissa, my view on this is that I am not happy or thankful that Trump trotted out a Dachau survivor to get people behind his racist immigration policies. Because a white racist who loves the Jews doesn’t really love the Jews; he will only use them as a pawn to make a point. And the alt-right knows precisely what the anti-Socialism trope really means (Bernie, Alinsky, the Jews and those POC who learn from them). So my view is: Mr. President, if you’re going to espouse a racist policy against brown people from “shit-hole countries,” please leave the Jews out of it. We are a small yet important piece of the American pie. We believe many different kinds of things. But what we don’t want, I think, it to be pitied and used by the rest of white racist America to support the very policies that, if directed at us, would have resulted in more of us dying in Europe. In fact, they were directed against us and many of us were needlessly murdered as a result. Remember Mr. President, there were plenty of people like you in 1942 who did not want us to immigrate to your white Christian America. And many of us illegally made it here anyway, to save ourselves and our families, just like the people on the southern border you are trying to keep out. In short, I have no interest in racists liking the Jews. So, no, I am not thankful for the Jewing in President Trump’s speech.

Shaul Magid is the editor of Jewish Thought and Culture for Tikkun, professor of Jewish Studies at Dartmouth College, and the Kogod Senior Research Fellow at the Shalom Hartman Institute of North America. His last two books are The Bible, the Talmud, and the New Testament: Elijah Zvi Soloveitchik’s Commentary to the New Testament (University of Pennsylvania Press, 2019) and Piety and Rebellion: Essays in Hasidim (Academic Studies Press, 2019). His forthcoming book Meir Kahane: An American Jewish Radical will be published in 2020 with Princeton University Press.

2 thoughts on “Jewing the State of the Union”