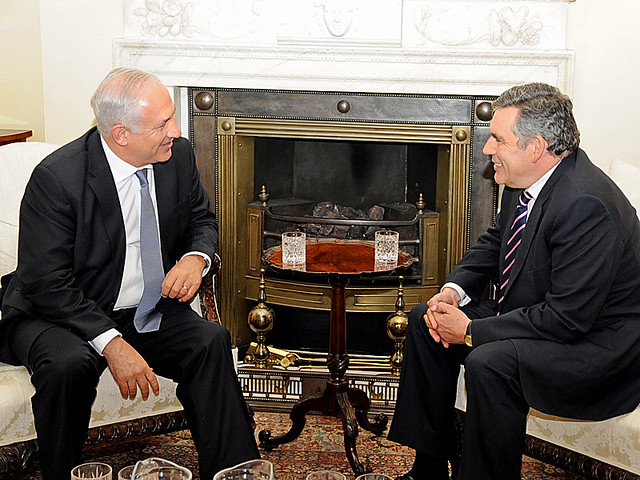 Tikkun ally and policy analyst M.J. Rosenberg looks at the recent behavior of the right wing pro-Israel lobby AIPAC and detects an agenda of undermining and discrediting Obama, not to mention anyone seeking peace between Israel and Palestine. Meanwhile, Obama says he will veto the Palestinians’ attempt to get UN recognition, because he thinks they should instead go back and negotiate with Netanyahu who meanwhile is building more and more Israeli presence in the West Bank. That demand for “negotiations now” is shown to be a non-starter in the editorial today in Ha’aretz newspaper and in the analysis provided by the moderate King of Jordan. Please read this to understand why, unless Palestinians get more leverage through the UN, no move toward peace is going to happen as long as Netanyahu or his right-wing supporters are still shaping Israeli policy.

The Washington Post’s Jennifer Rubin is a right-winger, a predictable neocon, and about as aggressive a defender of Binyamin Netanyahu as exists anywhere in the mainstream media. In fact, her entire political worldview seems to be dictated by her devotion to the concept of Greater Israel. Nonetheless, she is provocative and worth reading.

In fact, it is precisely those attributes that make her worthy of attention. Reading Rubin provides insight into what the Israel-first crowd is thinking because she is one of the first people her ideological allies call when they want to influence the media narrative. Now that the Atlantic’s Jeffrey Goldberg has sharply deviated from Prime Minister Binyamin Netanyahu’s line, Rubin is one of our best sources of insight into what the lobby (and people to its right) are up to.

You can find the full article at Political Correction.

Ha’aretz Editorial has written a piece called, “Netanyahu is dooming Israel to live eternally by the sword,” which starts off:

Author Etgar Keret, on assignment from Haaretz, accompanied the prime minister on his trip to Italy this week and reported on Benjamin Netanyahu’s perceptions of the Israeli-Palestinian conflict.

“This is an insoluble conflict because it is not about territory,” Netanyahu said. “It is not that you can give up a kilometer more and solve it. The root of the conflict is in an entirely different place. Until Abu Mazen [Palestinian Authority President Mahmoud Abbas] recognizes Israel as a Jewish state, there will be no way to reach an agreement.”

On Wednesday, Netanyahu reiterated this position in the Knesset. “The reason for the conflict, and for its continuation, is the refusal to recognize the Jewish people’s nation-state in any borders,” he said.

Read the rest of the article at Ha’aretz.

Here is an interview Ha’aretz had with Jordan King Abdullan titled, “Jordan’s Abdullah: Israel is not interested in peace,” which begins:

Jordanian King Abdullah expressed alarm over Israel’s prevailing political opinions in an interview with the Washington Post Thursday, saying that the Israeli public is not interested in a return to 1967 borders, with its leadership no longer working toward a two state solution or peace.

Read more from the interview at Ha’aretz.

One thought on “Is AIPAC Trying to Undermine Obama? Plus Thoughts on Palestinian Statehood”