Are liberals having second thoughts about immigration? 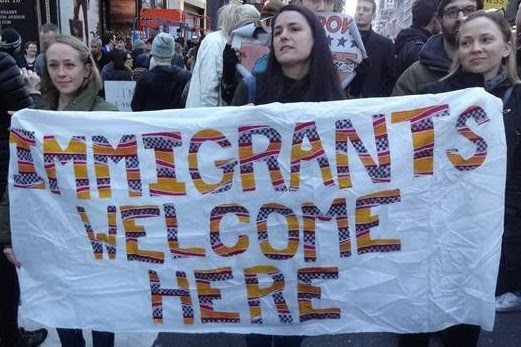 On June 20 The Atlantic posted an article by Peter Beinart claiming that the Democrats had “lost their way on immigration.”

Beinart is a respected liberal centrist—of the sort that supported the 2003 Iraq invasion until it started going bad—so the article created a stir among opinion makers. Rightwingers at Breitbart and National Review gloated. Liberals took Beinart’s thesis to heart: Mother Jones’ Kevin Drum endorsed the article, and Thomas Edsall quoted it in the New York Times. A Chicago Tribune columnist cited it as an “important essay.”

It’s true that Beinart makes some good points. He suggests that the Democratic Party’s current pro-immigrant stance is largely just pandering to Latino voters. He dredges up decade-old comments from Glenn Greenwald, Paul Krugman, and Barack Obama that they probably wouldn’t want to make publicly now (although Greenwood backed off from his anti-immigration rant a few years ago). Beinart also questions a standard liberal claim that the presence of eight million documented immigrants in the workforce has only a minimal depressing effect on the wages of native-born workers, and he notes that one of the claim’s main proponents, University of California Davis economics professor Giovanni Peri, is also an apologist for guestworker programs and gets funding from firms like Microsoft that bring in foreign tech workers on H-1B visas.

But Beinart’s article is mostly a compendium of familiar sound bites on immigration, presented without much understanding of the issues.

One example is Beinart’s concern about how to keep people from immigrating here without authorization. He admits the undocumented population has actually remained stable for a decade, but he still worries that legalizing the eleven million undocumented immigrants currently in the country might produce “a magnet that entices more immigrants to enter the U.S. illegally.” Apparently he’s unaware that there’s exactly zero evidence for this supposed magnet.

Beinart also suggests a way to stop his non-existent new wave of undocumented immigration: he wants to “mak[e] sure companies follow the law and verify the legal status of their employees.” “Migrants would presumably be less likely to come to the U.S. if they know they won’t be able to find work,” according to Beinart. Actually, “employer sanctions” have been the official policy of the United States government ever since they were instituted in the Immigration Reform and Control Act (IRCA) of 1986. We can see how well they work: the largest increase in our undocumented population was in the 1990s, after employee sanctions became law. And no, E-Verify won’t help; it will just encourage more employers to pay off the books, or to use sub-contractors who pay off the books.

So why would the media consider Beinart’s uninformed piece an “important essay”? To understand this, we need to look at a little history.

The main effect of U.S. immigration policy for the last thirty years, whether intentionally or not, has been to make undocumented workers easier to exploit. While totally ineffective in stopping unauthorized immigration, measures like employer sanctions have provided bosses with a useful tool for threatening immigrant workers: the possibility of a workplace raid or some other action by the government. For example, an immigration official admitted in 2000 that at that time the authorities were rarely carrying out raids “unless the employer turns a worker in, and employers usually do that only to break a union or prevent a strike or that kind of stuff.”

This type of behavior by unscrupulous employers and immigration authorities is a major force keeping wages down for undocumented workers, who are paid between 6 percent and 20 percent less than comparable immigrants with legal status. This in turn results in downward pressure on the wages of many native-born workers, a phenomenon that Beinart considers one of the problems with immigration.

A Left Turn on Immigration?

If we really want to raise wages, we could just scrap employer sanctions and legalize the undocumented workers, an obvious solution that the AFL-CIO has backed since 2000, at least officially. But employers won’t support legalization unless they have a replacement for the cheap labor they’ll be losing.

So for the last decade establishment politicians from both major parties have promoted an immigration plan they call “comprehensive immigration reform.” It has three components: a limited legalization for many of the current undocumented population, a greatly expanded guestworker program, and a massive increase in the already massive enforcement regime at the southwestern border. While this plan provides some relief to millions of migrants, the downside is that it offers employers hundreds of thousands of guestworkers as a substitute for the newly legalized immigrant workers. The stepped-up border enforcement is intended to keep potential guestworkers from circumventing the program, and to keep them too scared to organize if they do make it through the gauntlet.

However, the establishment politicians failed to get their reform package through Congress. Republicans on the far right decided it was better to leave the current system in place and whip up resentment against immigrants as a way of diverting attention from the party’s economic program—tax breaks for the rich and austerity for everyone else. This strategy worked so well that now the xenophobe wing has managed to settle in the White House.

But President Trump’s anti-immigrant measures are spurring a turn to active solidarity with immigrants by a significant part of the population. Over the past five months we’ve seen more and more places of worship providing sanctuary for immigrants, unions demanding “sanctuary workplaces,” rapid response networks forming to counter immigration raids, and sometimes even spontaneous actions by bystanders when agents try to detain immigrants. For Democratic politicians and pundits this resistance to Trump might at first have seemed like a good thing, but Beinart’s article and the reaction to it suggest that liberals are starting to have second thoughts.

After all, what might happen to establishment politics if a large part of the population began seeing immigrants not as competitors or objects of exploitation but as fellow working people and valued allies in the struggle for social and economic equality?

[David L. Wilson is co-author, with Jane Guskin, of  The Politics of Immigration: Questions and Answers(Monthly Review Press, second edition, May 2017). Twitter: @Immigration_QA.]