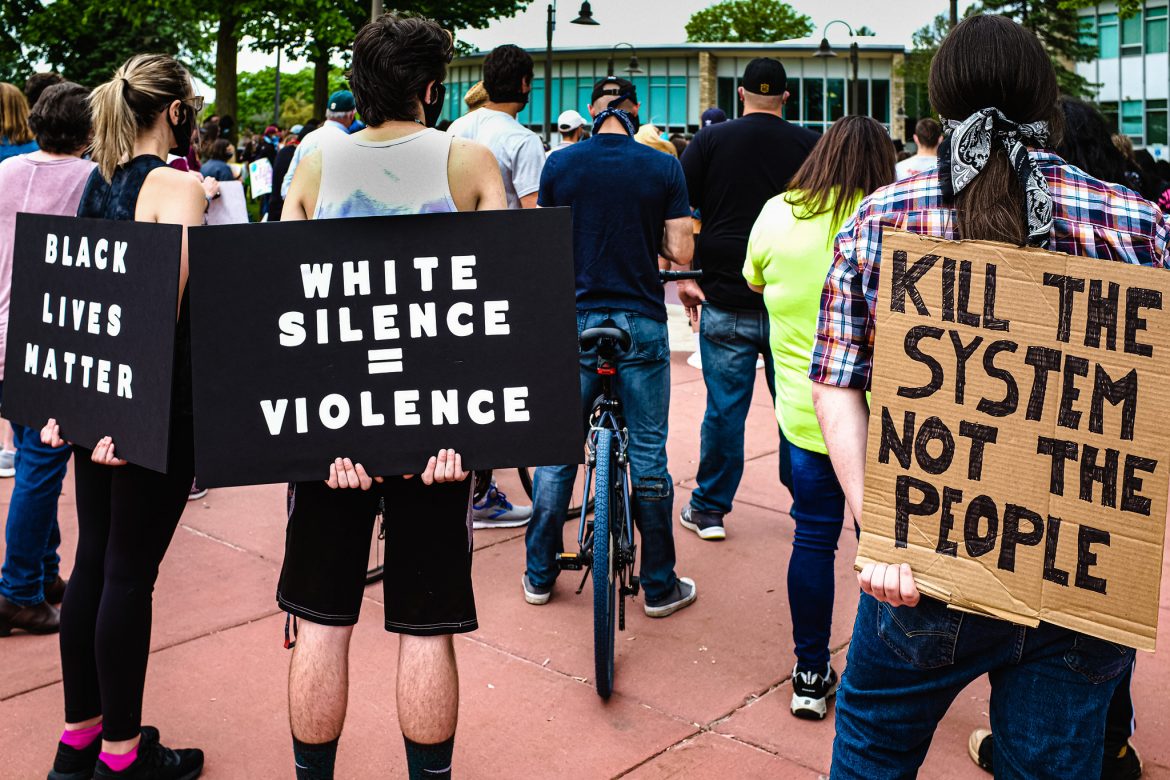 Protest for Justice, March for Peace

Many Americans have begun to understand that overcoming racism requires a transformation of the systems and teachings and structures of our society. Yet few have been willing to articulate exactly what changes are needed. Building on the platform of Black Lives matter, we at Tikkun, our movement for a society based on love and justice (see the book Revolutionary Love: a Political Manifesto to Heal and Transform the World), and our interfaith and secular humanist welcoming Network of Spiritual Progressives, put forward the program below as a starting point for discussion about what it would mean to change our societal arrangements to support the dismantling of racism in the 21st century. If after reading this article below you want to engage in a discussion of it, join our zoom based Torah study this coming Saturday morning where we will discuss these issues as part of the analysis of the assault on Moses for having a Black wife (or lover)--info for that at beyttikkun.org

Our anti-racist program includes creating an educational system and transforming media and the legal system so that undermining racist ideas and practices becomes one of their central goals. We will provide material support and champion those institutions and social practices that are most successful at fostering respect and caring for previous targets of racism. And we will foster education and public policies that help people understand why racism is counter to their interests and why solidarity with Black and Brown peoples and other groups that have been systematically excluded, marginalized, and targets of violence actually serves their interests and values.

If we want a loving and caring society that truly values the lives of Black and Brown peoples, and all people of color, we need to recognize and come to terms with how our country was founded and the impact of the past policies on the present. We also need to acknowledge and transform present day policies and practices that are discriminatory. The issues addressed in our Path to a World of Love and Justice are all relevant to the issues of institutional and individual racism in our society. Without a fundamental challenge to the economic and political practices of capitalist society there will always be some groups left out or left far behind, and those people will be encouraged by the most wealthy and powerful to find a scapegoat in some “other,” so it is unlikely that racism can be eliminated without this larger transformation. But, on their own, the policies we’ve suggested in the other parts of our program and even the emergence of a powerful transformative movement aimed at the goals of the New Bottom Line are inadequate to address the harm and trauma with which Black and Brown peoples live.

Even while celebrating those who have taken to the streets to protest racism, we are simultaneously witnessing at this time in history a continuation of the pervasive fear of black bodies and a denial that black lives matter; this is coupled with a rise of white terrorist and hate groups that no political party challenges, increasingly brutal and often racist police forces influenced by right-wing extremist worldviews, and the impotence of the news media and police to unveil the existence of underground hate groups that are becoming more visible and vocal. Today, blatant racism and violence, particularly against African Americans, Native Americans and Latin Americans, are manifesting in the form of extrajudicial police violence and killings, a school-to-prison pipeline that has resulted in more African American people in jails than were enslaved in the past in our country, the dumping of toxic waste and chemicals in communities where Black, Brown and low-income and poor white people live, unequal educational opportunities beginning before children even start kindergarten, and so much more.

Manifest destiny and American exceptionalism justified the genocide of Native Americans and deadens protest against present racist policies that keep Native Americans on reservations. These principles still inform and drive domestic and foreign U.S. policy resulting in oppression and violence at home and abroad. America’s ruling elite continues to use war to expand territory, to gain access to resources, and to increase its power. The military industrial complex leads to profits for private industry at the expense of the safety and welfare of Black and Brown communities at home and abroad.

Racism, however, is not only a structural problem built into the economic, political, and cultural heritage of our societal institutions, but also a psychological issue. It becomes particularly prominent when large numbers of people are alienated and in pain because they feel “dissed” by the society in which they live. They experience this pain because they buy into the ideology of the competitive marketplace with its insistence that we live in a meritocracy in which we “create our own reality” and hence we have no one to blame for the pain in our lives but ourselves. The resulting painful self-blaming is often dealt with through alcoholism, drug abuse, or other forms of addiction, but the pain remains.

In response to that pain, reactionary movements or leaders come forward and tell people that the reason for their pain is because of some “Other” (primarily African Americans or Latino/a, but also refugees of every sort, Muslims, LGBTQ people, feminists, Jews, or even all liberals or progressives). As Tikkun editor-at-large Peter Gabel puts it, racism and other forms of “othering” allow people to develop a “false self” in which they imagine themselves as worthy and powerful through seeing themselves as members of an idealized “white race” that provides them with a substitute sense of worth and value covering over their inner emptiness and sense of valuelessness. Yet because this sense of collective value is what Gabel calls “false” or imaginary, many people feel constantly under attack from an imaginary demonized “other” which in the historic context of the U.S. is African-American people, Latin, Muslims, Jews, or immigrants or refugees who they imagine are “taking over” and trying to recreate the experience of humiliation that already gives many white people deep pain and has led to the highest rate of suicides among middle aged white men. To undo this dynamic will take fundamental transformations in the way we organize our society so that people no longer feel humiliated. To move in this direction, we will need millions of people to be trained in empathic communication so they can help others dismantle their inner self-blaming, recognize that their alienation is caused by the values and daily operations of the competitive marketplace, and mobilize people to change that economic system. The Network of Spiritual Progressives offers such a training in what we call “prophetic empathy” on zoom (info and signing up to get information about the next training at spiritualprogressives.org/training).

Institutional racism is maintained also by the largely unconscious assumption of white supremacy that is internalized by many white people in white dominant societies around the world, though particularly in the U.S.. Overcoming the racism embedded in U.S. educational, legal and other systems requires white people to actively commit to becoming aware of the white supremacy that permeates their lives, exposing it, understanding how it diminishes the humanity of white people, and seeking to undo it.

We believe that the system of racism, sold to whites as “privilege,” actually hurts white people, divides them from people of color who are badly needed as allies to overcome poverty, homelessness, unfair distribution of wealth, and also demeans their own humanity and creates fear and distrust throughout their lives. No—this “privilege” of whites is actually a curse. We must not participate in a general demeaning of white people in this society or ignore the ways in which their lives have been negatively impacted by living in a society that uses racism to pit groups against one another. We refuse to perpetuate divisions based on race, class, gender, or ethnicity. We recognize that unity amongst all peoples, badly needed to overcome the variety of oppressions and distortions of living in a society based on selfishness and greed, cannot be fully achieved without dismantling racism. The vision of “a caring society” put forth in Rabbi Lerner’s book Revolutionary Love, would lift up all peoples. That requires not only a change in consciousness, but also a fundamental transformation of our economic and political systems. Keith Ellison, Attorney General of the State of Minnesota, who indicted the 4 policemen in Minneapolis who murdered George Floud, indorsed Rabbi Lerner’s book this way: “The caring society is the only realistic path for humanity to survive, and in Revolutionary Love Rabbi Lerner lays out a powerful and compassionate plan for building that caring society. I love this book. Please read it and join with others to build the movement that can enable these ideas to reshape our society that so badly needs this vision.” (To read the endorsements by Gloria Steinem, Cornel West, Medea Benjamin, Ariel Dorfman, Riane Eisler, Henry Giroux, and others, go to tikkun.org/lj).

Yet the transformation needed cannot be achieved by attempting to recreate socialist forms that speak to economic equality but miss the deeper transformations in how we relate to each other, to the Earth, and to our own inner development as loving and caring human beings. To address these systemic problems, we believe we need a New Bottom Line so that all our institutions are determined “successful” or “productive” or “rational” based on whether they prioritize the well-being and needs of the people who live in our country and the world and the planet itself, rather than whether they maximize money and power. And, in addition, we need to engage in specific activities and adopt particular policies that address the problems that constitute or unconsciously perpetuate racism.

Among the steps a loving and caring society will take:

One thought on “How to Overcome Racism”