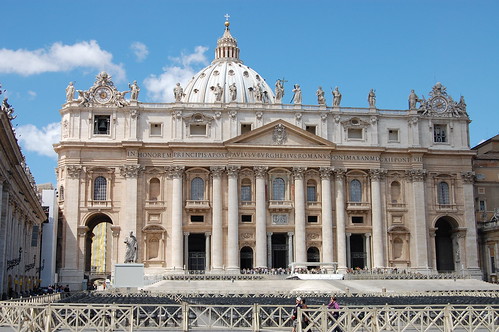 Conclave ceremonies to elect the next pope are in progress at the Vatican. Credit: Creative Commons/Dslrtravel.

I was asked yesterday on the Young Turks TV show how the Vatican could recover its sense of moral and spiritual leadership. First, I acknowledge the depths of the question the Vatican over the past forty-two years has lost any inkling of moral and spiritual respect. The pedophile priest crisis with the ensuing cover-ups at the highest levels; the financial scandals where even the Italian government forbade cashing Vatican credit cards among other things because of money laundering through the Vatican bank; the return of the Inquisition and silencing, hounding and attacking of over 105 theologians from all over the world (I was only one among these); the deliberate destruction of Liberation Theology and base communities in Latin America instigated with the complete backing of the CIA under Ronald Reagan, the spreading of new fascist sects such as Opus Dei, Legion of Christ and Communion and Liberation throughout Latin America, Italy, now North America and in all the places of decision-making in the Vatican; the infighting and jockeying for power that brought on the Vatileaks (the butler did it) fiasco—all this points to a complete affirmation of the historian Lord Action's remark that power corrupts and absolute power corrupts absolutely. The Vatican remains an “absolute monarchy” as historian John Julius Norwich names it.

But there is more. In my book, The Pope's War: How Ratzinger's Crusade Imperiled the Church and How It Can Be Saved, where I document all the above abuses and more, I also make the point that the late and great Dutch Dominican Father Schillebeexks made to me over fifteen years ago when he said: “I and many other European theologians believe the present papacy is in schism.” The past two papacies have been in schism because they have turned their back on the Second Vatican Council and its principles of justice for the poor, freedom of conscience, the right of theologians to think, the understanding of the church as the people and not just the hierarchy, the priesthood of the laity, the “sensus fidelium”, the right of national councils of Bishops to be heard, etc.

If we are correct that the Vatican is in schism then that means that every Cardinal, bishop and priest anointed in the past forty-two years is in schism and therefore does not need to be heeded or listened to. One's conscience holds first place more than ever. (The recently canonized saint, John Henry Newman, used to say that if pushed to choose between conscience and pope he would “drink to conscience every time.”)

Now we have a conclave full of schismatic cardinals voting for another schismatic pope.

Thus my pope vote goes to ... the Dalai Lama. Such a move would:

1) Get us out of the schismatic pope death spiral.

2) Allow time for all bishops, cardinals, and priests ordained in the past forty-two years to get themselves retrained regarding the fundamental principles of the Gospel and of Vatican II and in the tradition of creation spirituality to which Jesus belonged (scholars today are finally agreeing that he came from the wisdom tradition of Israel).

3) Allow time to fumigate the very infested buildings and palaces of the Vatican.

4) Shut the Vatican down for good and reopen it for the museum that it is.

5) Enable us to sell off the art treasures in the basement of this museum and give the proceeds to the poor. 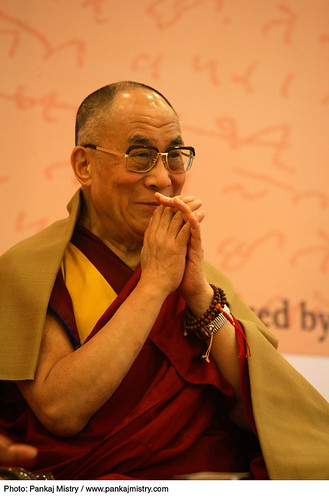 The Dalai Lama is the head of state and the spiritual leader of the Tibetan people. Credit: Creative Commons/Pankaj Mistry.

In short, because the Vatican is so sick and infested with evil spirits, it is time to admit that in its present configuration history has passed it by, the Holy Spirit has exited, and its usefulness has run out. But electing a person of genuine spiritual and ethical stature such as the Dalai Lama who also stands for global intelligence and peace and who calls compassion “my religion” would be a genuine act of humility and vision by the voting cardinals. It would also draw us nearer to the real teaching of Jesus and the person who Jesus was. Electing a non-westerner and a non-Christian who recognizes the spiritual genius of Jesus and the truth of the “Buddha Nature” or “Cosmic Christ” in all beings would refresh the move for interspirituality and interfaith that our planet needs so badly. (A bishop of Rome could be elected, hopefully by the people, who would live in that bishop's place—the Lateran—and preside over the Roman flock meanwhile.) This creative and visionary act by the conclave would help turn the tide of history at this time when our species is in mortal danger of destroying itself by weaponry and wars and/or by continued ecological imperialism, destroying the very nest that feeds and nourishes us.

Now, if the Dalai Lama could not get the required two-thirds vote from this conclave, a second choice that would provide a meaningful message to the world from these cardinals, schismatic though they be, would be the following candidate: Sister Joan Chittister of the Benedictine Order. This one move by the electors would also change the religious map (which soneeds changing!) by declaring: “We, the all male cardinals who alone lead the Catholic Church, are not, after all, a closed, incestuous, men's club busy beating up on women with ancient rules against birth control and declaring that we and male politicians have the right to tell women what to do with their bodies. We are listening to today's women and recognize that they have intelligence, wisdom and deep spirituality and surely they can lead in religion as they do in every other field.”

Sister Joan Chittister of the Benedictine Order, visionary of the Catholic Church, is an international lecturer and award-winning author of over 40 books. Credit: Benedictine Sisters of Erie.

Overnight, the image of the hierarchical church would improve. And women's oppression and subjugation, a moral issues the world over doesn’t make sense, would become more visible on our ethical radar. Moreover, since I know Sister Joan, I know that she would wield an ax with both intelligence and courage that would clean out the evil spirits from the Vatican, just as her sister Benedictine, recently declared Saint and Doctor of the Church Hildegard of Bingen, proposed doing in the twelfth century.

Hildegard of Bingen said the pope was surrounded by “evil men who cackle like hens and scare themselves doing it.” But Sister Joan too would need to shut the place down for spiritual fumigation and get on with retraining all who claim the priesthood or leadership. She would not hesitate, I am sure, to reinvent seminaries more in the spirit of Jesus and the values of the Gospel and Vatican II's “preferential option for the poor” while allowing women priests, married priests, gay and lesbian priests to step up into leadership roles that are not clerical. She would return the church to the people, which it is supposed to be for, according to Vatican II, Hildegard and the Gospels.

At the same time she would be conscious of the grave sin of papalolatry that so feeds network ratings and television spectacles, but which has nothing to do with real spirituality. Decentralizing leadership lies at the heart of resisting the grave offense of papalolatry. She too would have the smarts to let the papacy die and to let the people imbued with God's values of justice and love rise and do so in circles of sharing in tune with the “web of life” (Hildegard), instead of the hierarchical power of ladders and patriarchal domination modes of power-over.

2 thoughts on “How the Papal Conclave Could Renew Religion: My Two Votes for Pope”