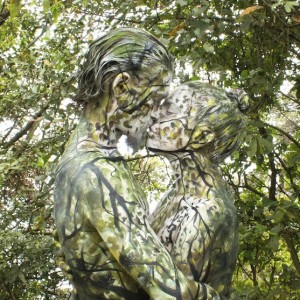 Part artist, part activist, part ritualist, and part therapist, Orly Faya’s work reminds us that, as she puts it, “humanity was born from the Earth and it is intrinsically connected to one living biosphere.”  Faya first began observing humanity’s disconnection from its interconnected and dependent nature during her extensive travels, and was called upon to heal this disconnection by painting people into the Earth during a ceremony in Peru.

When she put out a message offering to paint people into the world, people responded and she created seventeen pieces in the span of twenty days.  The images were put into an exhibition, but Faya soon realized the focus of the project “was about the experience with the people that were involved in the process.”

The text above was just an excerpt. The web versions of our print articles are now hosted by Duke University Press, Tikkun’s publisher. Click here to read an HTML version of the article or to download the PDF version.
Tikkun 2017 Volume 32, Number 4:24

Madeline Cook was a summer intern at Tikkun. She is a senior at Mount Holyoke College, where she majors in Politics and minors in Africana studies. Her academic interests include the intersections of political, feminist, and critical race theory.