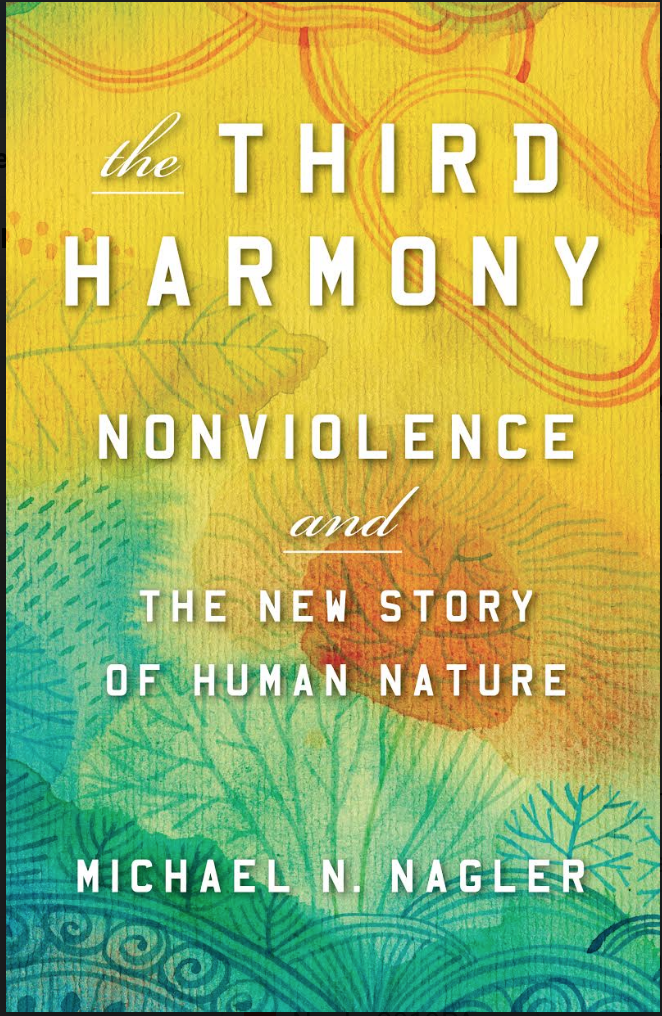 Book Review: The Third Harmony: Nonviolence and the Story of Human Nature
By: Michael Nagler

There is a quiet urgency running through Michael Nagler’s most recent offering. Nagler, Professor Emeritus at UC Berkeley and a renowned Gandhian scholar has advocated nonviolence as a way of life for decades. In the Third Harmony (a book and a companion film) he does a deep dive into the ontological heart of nonviolence -  the understanding that we are all swimming in a sea of  inalienable, interconnected consciousness -  and presents a stirring case for  how aligning our inner lives and social actions with this living force may be our last, best hope for righting the ills of the world.

As of this writing the world watches and waits as the sitting (and outgoing) American President spews venom on Twitter, refuses to concede the Presidential election, and files one unsuccessful legal challenge after another in a vain attempt to hold on to power. Years ago, Nagler and others presaged the emergence of this virulent strain of survivalist narcissism currently exemplified not only by our President, but in our popular culture. It’s on display in Trump’s infantile strong man antics,  in the panoply of superhero films that dominate movie theaters, in television shows such as a TV series that posited a serial killer as a righteous avenger, or in the voyeuristic echo chambers known as the nightly news.  In this social mythology we gaze incessantly at our reflection not out of self-love but self-loathing and to feed our insatiable need to be both victorious and validated. Those who do not reflect our desired image back to us are suspect at best or at risk of being ostracized from social life should their transgressions be deemed unforgivable.

Nagler offers the path of nonviolence, and specifically the Third Harmony, as a way out of this destructive narrative by choosing to intentionally animate a new one. “The purpose of this book” Nagler writes, “is to contribute as effectively as possible to the spread of nonviolence, its theories and practice, into the mainstream of modern culture. This will require a shift...from a view of the universe as consisting of matter, with everything separate from everything else and no overall guiding purpose, to one of the universe grounded in consciousness, such that everything is interconnected and human life in particular definitely does have a meaning and a purpose”. The understanding that our reality is grounded in an interconnected and responsive consciousness, what Nagler terms the new story, frames all aspects of the book, the film, and his prescriptions for how we can move forward as individuals enmeshed within a grander and purposeful oneness.

The title of the book was inspired by Nagler’s encounter with the writings of 8th century mystic Shankara, and his spiritual teacher Sir Eknath Easwaran. The first harmony refers to our relationship to “all there is”, the consciousness that has been there “from the very, very, beginning of everything” as Rabbi Michael Lerner has said. The second harmony takes us from “the universe story to the Earth Story”, writes Nagler. At this level of awareness we are cognizant of the sacredness of our external environment - people, planet, and other beings - and reflect that sacred awareness in our actions.  The third harmony focuses inwards, on our own awareness and experiences of consciousness as a life force and requires that we take on the discipline of creating spiritual harmony within ourselves. For Nagler, our possibilities for creating a nonviolent future are predicated on our capacity to become nonviolence, in our thoughts, intentions, and actions for “it’s useful to remember” he writes, that any personality shortcomings we have not yet resolved will limit our effectiveness in the outside world”.  And he shares decades of scientific research on quantum physics and brain science demonstrating that consciousness and interconnectedness are our true reality to make this case.

Although the Third Harmony argues for the primacy of our individual spiritual development, Nagler also offers personal practices and a concrete “Roadmap” as tools and directionals for how we can move forward internally and externally. To expand our internal alignment with nonviolence, Nagler recommends that we 1) avoid violent and vulgar mass media, 2) deepen our understanding of nonviolence by studying the theory, history, and methodology of nonviolence 3)Adopt a spiritual practice and discipline such as meditation 4) Push back against the isolating and individualistic forces of our society by prioritizing personal relationships and 5) Be the new story, by activating our personal capacities in service to the needs of our communities, if not the world. The Roadmap is a graphic model offering suggestions for how we can align our third harmony or “person power” with our constructive efforts to create alternative solutions and with our acts of nonviolent resistance or satyagraha.

It is telling that Nagler spends a relatively small amount of time in the book talking about nonviolent resistance. Perhaps this is because the role of protest and resistance in nonviolence is widely known, while the inner work that should guide those actions is often given short shrift.  In the companion film of the same name however, leading nonviolence activists share their stories of growing in their inner alignment with nonviolence and then putting that state of being into action against injustice and in defense of the human spirit.  These activists take us from Israel to South Sudan to Oakland, and from protesting nuclear proliferation to a forgiveness ceremony at Standing Rock led by Wesley Clark, Jr. son of army general Wesley Clark and a veteran himself. The film echoes much of the message that is in the book and brings nonviolent action to life through the lived experiences of educators, politicians, and organizers.

Taken together, the book and the film are a plea for the mainstream adoption of nonviolence without delay in order to bring us into right relationship with ourselves, each other, and our world. Yet this brings us to a question: Is it already too late? Can nonviolence turn the tide at this critical inflection point for our democracy, our natural environment, and our relationships with each other? The Third Harmony, however, asks us to consider another question: Is there any other way?  Despite what we are fed in the media, despite the worst behaviors of members of the political class and the raging hate that is marching across the country, when we are freed from the spells cast by fear, hate, greed, and the falsity of separation and our inner lives are in alignment with consciousness, the experience of this deeper unity compels us to reach out to each other with both hands. One raising a mirror to those committing acts of injustice and refusing to allow self and community degradation to continue, and the other open and extended towards the other, in anticipation of awakening that same life force within our “adversaries”. That is the power and the promise of nonviolence. That is the love that can change the world.

Sandra Bass, Ph.D serves as Associate Dean of Students and Director of the Public Service Center at UC Berkeley. Her current writing project explores eldership, service, and educating for spiritual and social transformation.