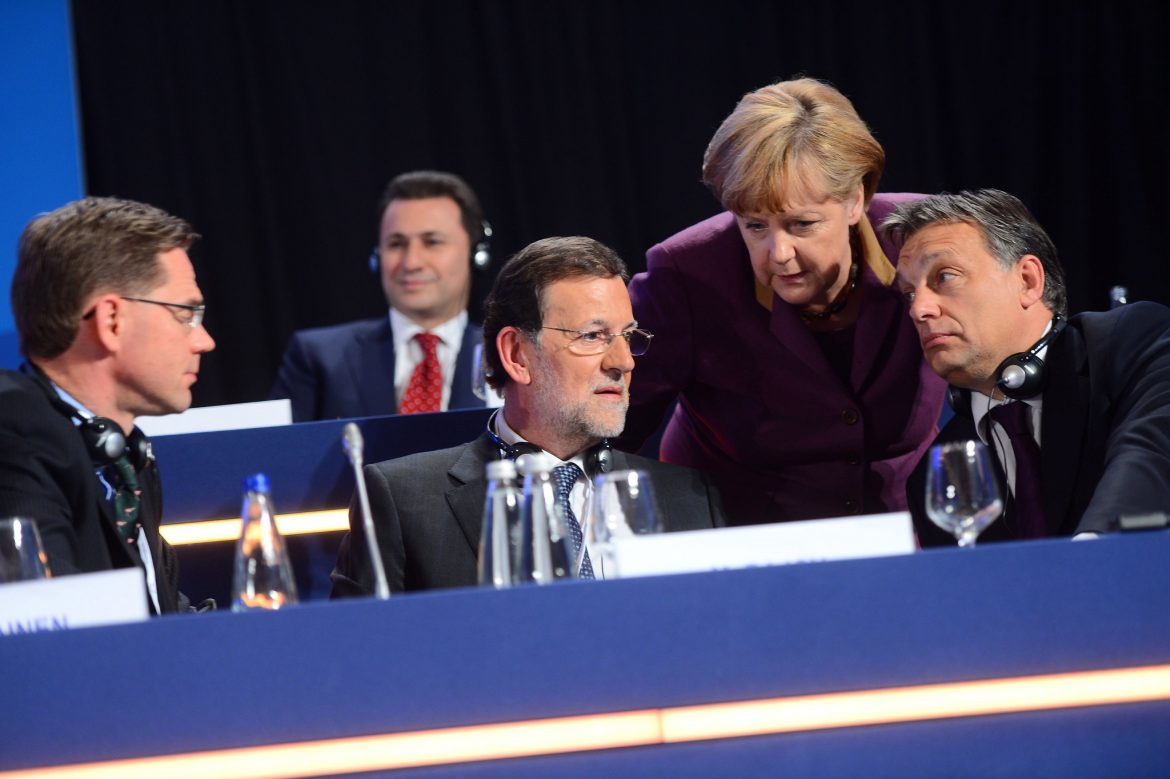 Being sucked into German politic’s latest maelstrom are the two vessels which headed every Federal German government since 1949. Elections to the European Union‘s Parliament in May gave the “Christian Union” a measly, chilly 28.9%. Though still Germany’s biggest, its keel is wobbling. With mumbling about Angela Merkel’s views and health (sharp eyes and tongues have twice noted her hands trembling), the hunt is on for a new captain, with no promising candidates in sight.

Its coalition partner, the Social Democrats (SPD), whose turbulent, rarely valiant history traces back to 1869, suffered far deeper immersion in that EU election whirlpool, with only 15.8%. Recent polls give them 13%. What a come-down for the one-time helmsmen! Now that their humbled Andrea Nahles has at last abandoned the floundering ship, they too urgently need a new captain, who must be found this summer and then win approval in a vote of their dwindling membership.

These two, still ruling jointly, no longer represent a majority. Though regular elections are two years away, the German political system could lead to earlier balloting if the two fall out and lose a no-confidence vote in the Bundestag.

In fact, they seem to be falling out now. The European Council, the powerful cabinet of the EU, needs a new chairperson, nominated by the heads of all 28 member states, then approved by a majority of the 751 newly-elected members of the European Parliament. After the heads of state argued for long days and some nights, Angela Merkel, now with a steady hand and Germany’s strong biceps, came up with a surprise: Ursula von der Leyen, her Minister of Defense for over five years, although she has never even been a deputy in the EU parliament. Though constantly shown sweetly smiling, her icy, merciless belligerence recalls for me the cruel Snow Queen in Hans Christian Andersen’s fairy tale.

Was this Merkel’s parting favor to a long-time colleague, perhaps to rescue her from nasty tales of corruption; how her department paid multidigit sums to flocks of obliging, outside consultants for advice on nearly everything, even office furniture? A Bundestag committee is currently investigating. Or was she kicking a possible usurper upstairs and thus out of the way? Who knows? We do know that the SPD partners were not consulted and may angrily vote against her even if she remains the German candidate. Will this cause a new fissure in the coalition caulk of the ship of state?

Most media speculate eagerly on such matters but rarely show dismay at her threats and boasts of military might, “the first time since reunification that we have a growing troop again”. Or “When tension or crises require quick organizing to move troops great distances in Europe then this must be planned exactly and proceed with great speed and efficiency“.

Within NATO German officers will now command a “Very High Readiness Joint Task Force” which can be sent anywhere within three days. During her visit to troops stationed in Lithuania, this Snow Queen announced that by 2021 Germany will invest some 110 million euros in Lithuania’s military infrastructure and reiterated Germany’s commitment to deploy troops near Russia, in regions which her predecessors once leveled. “We will stay as long as the security situation requires…We are the only European continental country to maintain a forward presence in the Baltic area, protecting our Baltic friends.” And, she boasted, we are “the second largest supplier of troops in Afghanistan”.

NATO plans are to be coordinated with a new military arm of the EU which von der Leyen has been building up as a junior partner, dominated by Germany. In March the European Commission, which she hopes to head, reported plans to strengthen and widen highways, bridges and rail lines so troops and tanks can move quickly eastward from West German bases and ports. Déja vu 1935!

One week before her nomination by the big shots some 5000 very peaceful people camped out in southwest Germany to protest just such developments. In talking, singing, dancing and protest demonstrations, they demanded that the huge US Army base at Ramstein, the biggest base outside US boundaries, be shut down. It is from here that top generals direct troop movements in Africa and the Near East, and from here that orders, sent per cable from safe spots in Nevada (in a relay made necessary because of the earth’s curve), deploy drones to murder anyone the Pentagon decides is an enemy, together with any men, women or children in the vicinity. Wedding parties are destroyed, farmers blown up, countless boundaries violated, most recently and dangerously those of Iran.

“When you see what a turn-table Ramstein is,” General Mark August boasts, “when you look across the tarmac and see those giant planes, then you can grasp that this is a place where we get things moving, in the direction of Africa, the Near East or Eastern Europe.”

The counterdemonstrations now take place annually. Others are directed against the US Air Force base at nearby Bueckel where an estimated twenty B61-3/4 atomic missiles are stored, each one with thirteen to twenty times the annihilation power of the bomb at Hiroshima. Germany’s Tornado planes are there, too, ready to carry them eastward at any moment.

The encampment at Ramstein was bigger than in recent years. But it could hardly reflect a general desire for peace by a majority of Germans, in spite of a lasting campaign by the media, rivaled only by the media of the USA, against imagined Russian plans of aggression.

Sadly, the only German party to achieve big gains in the EU vote, the “Greens”, has not distinguished itself as a party of peace. At its start, while stressing environmental questions, it leaned strongly to the left, even the radical left. But radicals grow older – and often tamer. Its ecology became tainted with business interests during coalitions with right-wing Christian Democrats, as in Baden-Wurttemberg, where the only Green minister president of a state, Winfried Kretschmann, is very cuddly with Daimler-Benz and Porsche, neighbors of his capital in Stuttgart. A similar marriage of Greens and “Christians” in the state of Hesse led to abandoning a fight against a damaging expansion of the huge Frankfurt airport and against cutting down the venerable Hambacher Forest to dig lignite coal. In foreign policy the Greens often lead the pack in a threatening belligerency toward Russia. And yet, seen by many as an alternative to the two older established parties, and with attractive young leaders, the party soared in the EU vote from 9.8% five years ago to 20.5% this May!

As for the far-right Alternative for Germany (AfD), its gains in the EU vote were less than many had feared. But the menace remains, especially in coming elections in the East German states of Brandenburg and Saxony. It was also brutally dramatized by the murder of one decent Christian Democratic politician by a fascist who hated his courageous defense of immigrants and foreigners.

And the Left, Die Linke, the only Bundestag party to oppose expansion, militarism, belligerency? In the EU vote it slumped from 7.4% in 2014 to a dangerously low 5.5% in May. Inner-party quarrels, a split about strategy and a failure to fight “in the streets and factories” have prevented it from winning the increasing numbers of dissatisfied union and low-paid SPD voters. Its participation in coalition governments in East German states, seen by some as “the Establishment”, has certainly lost it votes. There are hopes it may be moving to cure such ills by fighting hard for rent controls, even confiscation of real estate carnivores – developments I will discuss in future Berlin Bulletins.

One interesting new local development may remind some readers of a jolly tale published by the Grimm brothers just 200 years ago – about a donkey, dog, cat and rooster who, threatened with culling due to useless old age, joined to escape this fate by going to Bremen as musicians – braying, barking, meowing and crowing. En route they succeed in scaring off a band of robbers.

In an election in today’s Bremen, Germany’s smallest, poorest state, the Social Democrats were outnumbered by the Christian Democrats for the first time since 1949. But they saved their governmental skins all the same, not with barnyard music but by daring to join not just with the Greens but, for the first time in a West German state, also with the Left, which had made modest gains in the Bremen vote. Will this triple coalition work? Can local left-wing factions in the SPD and Greens and a militant leadership in the Left unite and, defying large debts, achieve improvements in education, housing and environment? The experiment will be watched, closely and critically! Maybe these three, in Bremen at least, can harmonize, without making too many compromises with all those menacing robbers. After all, fairy tales do often have happy endings!