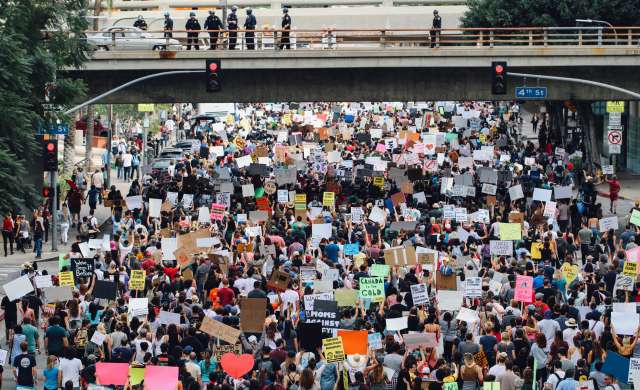 Apathy can only be overcome by enthusiasm,

and enthusiasm can only be aroused by two things:

first, an ideal which takes the imagination by

for carrying that ideal into practice.

Though protests are often underreported in the media, it is clear that the present administration has brought out more people and events than even the turbulent years of the anti-Vietnam war movement. According to the Crowd Counting Consortium, in the last eighteen months there have been more than 20,000 separate demonstrations, involving as many as 15 million people. Apathy is not our problem! But what’s also clear is that marches, demonstrations, and protests will not be enough to reverse the systematic, cold-hearted violence we’re up against, which has been building over decades. It’s time for vision and strategy, á là Toynbee’s formula.

Historically (and this is a valuable comment on human nature), vulgarity and violence don’t get all that much purchase on the imagination and eventually regimes like this one collapse; but we don’t have the luxury of waiting for that to happen by itself when – for one thing – the very life-supporting system of the planet is rapidly degrading. Life needs us, now. Vision and strategy, both within our reach, can bring together the sporadic demonstrations/protests/etc., and the organizations working away steadily but separately on the many faces of change we desperately need, and even our opponents.  They will be won over, one by one; if we forget that our movement will be self-contradictory, and therefore weak.

Vision. First, let’s identify, and name the inspiring idea we all care about in a language or an image we can all relate to. That will guide the strategy to make that idea or vision a reality. And perhaps a recent action of our government, among many appalling examples, can throw that idea into relief. Some weeks ago the World Health Organization sat to consider a measure based on decades of research (not to mention common sense) showing that breast milk is the healthiest nutrition for nursing infants and children. Duh. All the delegates thought this was a slam-dunk, but they hadn’t reckoned with the walking shock doctrine who now sets our nation’s policy. To everyone’s stunned surprise, the U.S. worked hard to kill the measure, stooping to crude threats against smaller nations and similarly ennobling tactics, all in order to benefit companies that are producing artificial formulas – benefit them financially, that is; humanly they would suffer “moral injury” from their efforts, without noticing. The U.S.’s efforts and tactics largely failed, thank God. But they clearly bring out that we’re dealing with people who somewhere along the line they have lost their awareness of what it means to be a human being.

This shocking loss of awareness actually gives us a kind of leverage. Human nature is such – this is the unanimous testimony of the world’s wisdom traditions and has the support of much modern science – that no one can eradicate his or her sense of kinship with others, with all life, no matter how effectively it’s obscured by ideological conditioning. Why else would so many of our service men and women be driven to suicide by the “moral injury” they inflict on themselves by harming others?

The students of Serbia who engineered the successful overthrow of the Milośevič regime in 2000 said of their bloodless victory: “We won because we were on the side of life.” In our case, that is only more obvious. For “life,” to be more concrete, we must reverse the way our culture is promoting a dangerously degraded image of the human being. That is a fascist agenda, as Fintan O’Toole recently pointed out in his article for The Irish Times on June 26, “Trial runs for fascism are in full flow.” But fascism is cultural before it is political: remember Orwell’s chilling image of “a boot stamped on a human face,” and it’s on the cultural level it must and can be intercepted.

As mentioned, just when we needed it most, science has come back into line with the perennial traditions of human wisdom, the purport of which is and has always been to uphold a very different image altogether, which can be conveniently summarized in a few main points:

The “old story” (it’s actually relatively new in human history) that we are separate, material entities doomed to compete for ever-scarcer resources (or prestige, or whatever) is by now absolutely without basis in science or human wisdom – not to mention its becoming an increasingly obvious death-trap. When the Jewish sages said we were made semel elohim, in the very image of G_d, they were handing down to us, so many centuries later, a rallying point for the rescue of the human experiment.

Strategy. To make this vision a lived reality we need not only to articulate it wherever possible but draw up a stepwise, long-term “intelligible” plan proceeding from success to small success.  Here we might take a leaf from the Sarvodaya Movement in Sri Lanka, that developed a Five-Hundred Year Plan for Peace – OK, we don’t have a tenth of that time, but the general scheme is to look far enough out to liberate our imagination to describe the ideal world we’re working for, a world based on that higher image of humanity, and then step it down by, say, 5-10 year increments to identify what we need to accomplish at each point, coming down to what we do right now. What issues will we tackle in what order and with which means within the ample repertoire of nonviolence – we don’t want to be part of the problem we’re trying to solve! We have a “Plan for a World of Love and Justice” that might start our creative strategic juices flowing; Metta’s Roadmap offers up a framework. However we go about its creation, the strategic plan will bring us together around a common direction, bringing both unity and order out of the present creative but unfocused ferment.

This process will be much enhanced if each one of us takes every opportunity to explain why we’re working on restorative justice, abolishing plastic straws, blockading a weapons train – whatever – in the name of that higher image outlined earlier. This is the underlying unity beneath the myriad wonderful projects, constructive and obstructive, that are ongoing or should be. Being furnished with some of the science behind it today can often help (see our scienceofnonviolence resource). Finally, we’ll be changing the underlying culture that brought all these issues into being in the first place.

This is how paradigms change.  This is how the seemingly impossible becomes the blessed inevitable. Remember, we’re doing this for the protection of life itself, and life itself is the power that will give us victory.