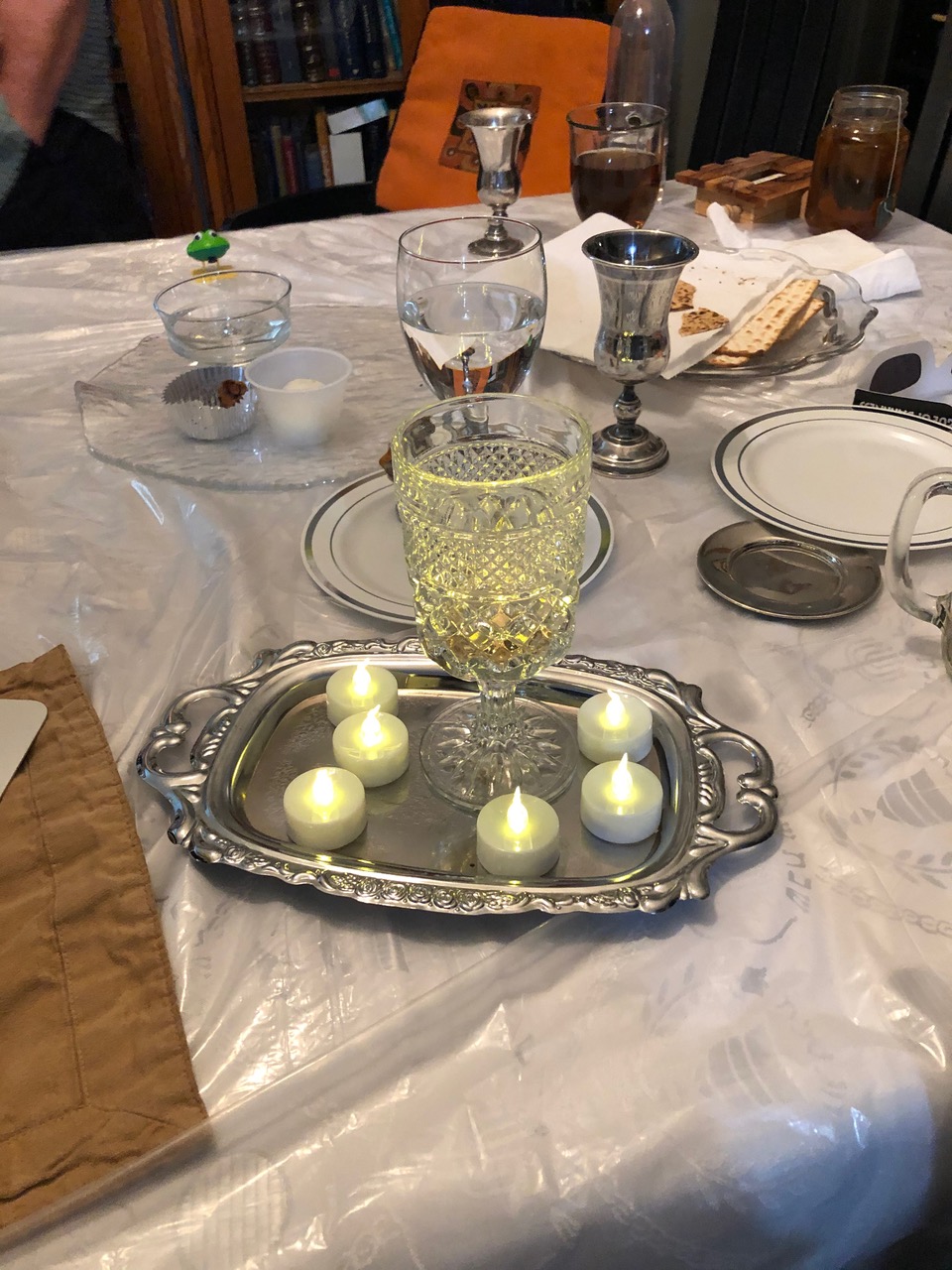 One of my favorite Passover memories from childhood is welcoming Elijah the Prophet to our family seder table. I loved the drama and mystery of the moment, including pouring a cup of wine for our honored guest, calling out his name in song, and opening the door to greet him. I remember watching vigilantly to see if this legendary spirit had slipped in and taken a sip of wine from the goblet we set out for him.

But why do we invite Elijah to join us for the Passover meal? He is not a part of the Exodus story. We only learn about him much later in the Hebrew Bible in the Book of Kings.

This tradition, which arose in the medieval period, has its roots in earlier rabbinic discussions about how many cups of wine we drink during the seder—four or five? The debate was based on how to count the various expressions of redemption in relevant verses in the Book of Exodus (6:7-8). While the tradition emerged to drink four (based on the clustering of four such expressions in verse 7) the notion of drinking five eventually led to the creation of “Elijah’s Cup.” As various rabbinic figures explain, this special glass is most fitting because according to the book of Malachi (3:23), Elijah will return in the future to herald the final redemption. At that time, the prophet will resolve all outstanding questions about Jewish life and practice, including how many cups of wine we should drink at the seder!

The notion that Elijah will return at the end of days to usher in the Messianic age is based on the dramatic description of his departure from the earth in II Kings. While the Bible tells us that great figures like Abraham and Moses died, Elijah ascended to the heavens on a “fiery chariot” in a “whirlwind” (II Kings 2:11). This tradition also led to the development of a genre of folktales about Elijah’s role as an intercessory figure, who would appear—often incognito—to help those in need.

Elijah’s name is also invoked at various Jewish ritual moments, including intergenerational and other liminal times. Doing so brings us solace, strength, and hope as we move, often haltingly, between life experiences. At the seder we welcome Elijah towards the end of the evening, as we turn our attention from the original redemption of our ancestors from Egypt to the future redemption.

Part of what makes this ritual particularly meaningful for me is a simple innovation my father added to Elijah’s Cup: after filling the goblet, he places six memorial (yahrtzeit) candles around it. He does so because on April 19, 1943—the first night of Passover that year—German soldiers and police stormed the Warsaw Ghetto seeking to deport its remaining inhabitants to concentration camps or killing centers. This led to what is known as the Warsaw Ghetto Uprising, in which Jewish freedom fighters battled valiantly against the Nazi forces for nearly a month. While the Germans quashed the revolt on May 16, 1943, the bravery of the ghetto inhabitants served as a source of inspiration to Jews and non-Jews alike during the war and long after. In fact, some in the Jewish community wanted Holocaust Memorial Day to be observed on this date (it is widely observed twelve days later on the 27th of Nissan).
My father, a rabbi and scholar of Eastern European Jewish culture, was born in 1939 in Brooklyn, where he was educated in a secular Yiddish school by emigres from Poland, Russia, and Germany. Several of his teachers at the Jewish Theological Seminary, where he was ordained in the mid-1960s, were refugees from Nazi-occupied Europe. My dad felt that adding the six candles was a powerful way to fold this horrific modern event into an existing ritual involving Elijah the Prophet, without overwhelming the celebratory nature of the night. As he said to me recently, “I felt compelled to bring the question of the Six Million before the Master of tayku before proceeding with the rest of the seder.”

In using the Aramaic term tayku, he was referring to the tradition that this word, which is used in the Talmud to indicate that the rabbis reached a stalemate in their debates, is also an acronym for “The Tishbite [Elijah] will answer questions and complications.” In other words, at the end of days the time-travelling prophet will answer all of the outstanding issues the sages could not resolve themselves. Following this ancient tradition, my father brought the wrenching questions of the Shoah before Elijah the Prophet and the One who sent him forth.

This year, I was able to celebrate the Passover seders with my parents for the first time in almost a decade. Like countless other Jewish families, we connected by Zoom—my folks quarantined in St. Louis and me, my wife, and our kids in Boston. When it came time to welcome Elijah, I, of course, asked my dad to lead us in the ritual, including his innovation with the six candles. Needless to say, it was a poignant moment: he is now in his early 80s, I am in my mid-40s, and my twins are 13. In addition to pouring the wine, lighting the candles, and opening the door for Elijah, my father also shared with us one of the literary sources that inspired this liturgical addition: a poem by the Yiddish writer and activist Binem Heller entitled “It is the Month of Nisan in the Warsaw Ghetto.” My dad first learned it in the I.L. Peretz School in Brooklyn as a boy at the annual “Third Seder.”

While the COVID-19 pandemic and the Holocaust are two very different phenomena, we are certainly living through a challenging and painful time. In such times, we all need sources of inspiration to bolster our resiliency and sense of purpose. This year, the ritual of Elijah’s Cup—conducted through Zoom—provided me with such inspiration. What made it so moving was not only the memory of the Warsaw Ghetto fighters, but the opportunity to connect meaningfully as a Jewish family across three generations decades after the Holocaust. Doing so in the midst of the pandemic, when tending to our relationships with loved ones feels both more complicated and urgent, added greater meaning to the moment. As my father spoke to my children about his youth, about his diverse educational experiences, and the importance of asking hard questions—of ourselves, of others, and even of God—I glanced at the cup we set out for Elijah and knew that the prophet—the one who transcends all generations—had been there, quietly supporting us on this night of intergenerational celebration, questioning, and yearning for redemption.

About Or N. Rose

Rabbi Or N. Rose is the founding director of the Miller Center for Interreligious Learning & Leadership of Hebrew College. He can be reached at orose@hebrewcollege.edu.