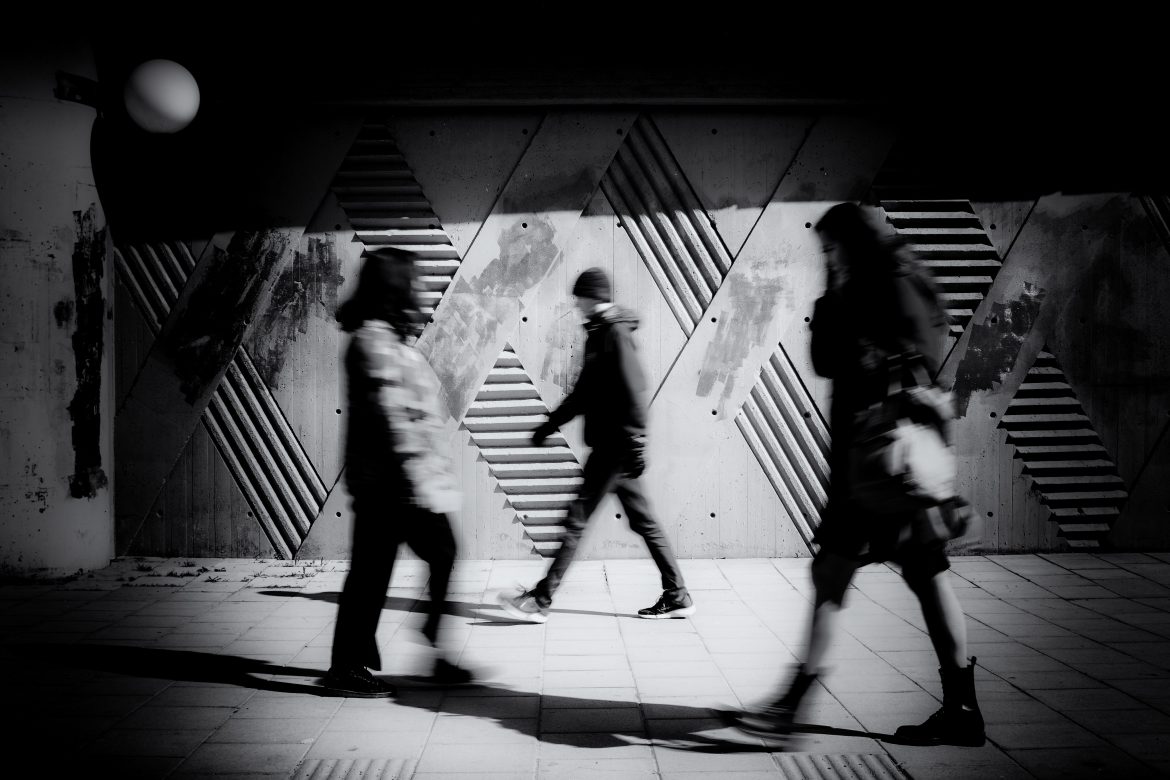 Walking down the street is not the private and isolated activity that it seems to be. In the section on street life in my book The Desire for Mutual Recognition, I show that when we walk down the street passing each other with seemingly blank gazes, we are actually engaged with each other, interlocked by the bond of mutual presence that connects us. We are intensely aware of each other as we approach and pass each other—in fact, we must actively avert our eyes to keep ourselves from open contact, and through this active aversion we repeatedly wrench ourselves away from the pull we naturally feel as social beings toward looking at each other and actually entering into each other’s presence. This very same preoccupation with aversion from the other’s presence manifests itself in the distant look we affect, as if we were all heading steadfastly toward very important destinations, a look which actually serves as a denial of the pull of the others around us, whether passing us or coming up behind us or sitting on a stoop as we pass by: we pretend to be “on our way” somewhere to disguise our fear of each other’s gaze and of the pull of our own desire for contact with the sea of humanity around us. The illusion we give ourselves is that we are merely separate individuals inhabiting a private and self-enclosed space, but in reality we are enmeshed in the same social field, engaged in the work of mutual evasion of the threat of being vulnerable to the other’s recognition of us. We are together withdrawn into ourselves, preoccupied with evading each other, rather than fully expressing and manifesting ourselves through the relief and pleasure of mutual recognition. The other approaching us is perceived as a threat, a source of potential negation and humiliation, rather than the source of our completion, a welcome partner on the same planet.

A striking revelation of this phenomenon of mutual aversion and evasion occurs whenever, by accident, we find ourselves actually walking next to another person who is pre-configured as a stranger (the condition of “strangerhood” is not a natural state but an expression of the pre-existing culture of the social field). When this parallel walking happens to occur, almost always by accident in violation of an unspoken, mutually enforced requirement of mutual distance that we enact as if following a law of collective walking, we are thrown into an awkward and actually frightening position of either having to speak with the person aligned with us as we walk, or quickly rushing ahead or slowing down to recreate the requisite condition of aversion, of mutual separation. Walking side by side appears to contradict aversion because our true condition of mutual presence is forced upon our reciprocal awareness by the side-by-side alignment. The “natural” response—the response if we lived in a world expecting receptivity to human connection and natural affection—would be to say hello and begin to chat, to get to know each other. And in truth each side-by-side walker longs for this experience of open mutual recognition as it might draw each of us out of the reciprocally enforced prison of our withdrawn state. But if either party initiates such an encounter with a simple hello, he or she runs the risk of an abrupt rejection or tight-lipped, forced reply: the weight of the prior aversive rules make such a striking-up of connection an understood violation of the rotating patterning of aversion that constitutes the street as a safe space, a space safe from the vulnerability of mutual recognition.

If you dare to try this side-by-side walking one day, or if you simply notice what you feel when it happens to occur, you will suddenly sense the hidden norm of the street culture that has been enveloping you, that you have been unconsciously “swimming in”. And if you violate that culture with a hello and a few words, you may feel the pain of being rebuffed, or the relief and opening-out of being responded to acceptingly in a mini mutual breakout. But even if you do not wish to actually try the side-by-side experiment, on your next walk outside simply let yourself notice the strict rules of spacing that characterizes the milieu of mutual aversion, the way you immediately correct your distance if you accidentally move too close to someone ahead of you or find yourself feeling followed by someone behind you. You will see that this seemingly commonplace and unexceptional activity of walking down the street is actually fraught with social tension, and also social import. A lot is happening; a complex pattern is being collectively enacted and, unconsciously, collectively enforced.

The importance of these revelations of street culture, of sensing what I am calling the prison of mutual aversion, is that it is but an everyday microcosm of the entire social universe we inhabit without being conscious of it. In discussing the economy, I often give the example of a supermarket, a vast collective enterprise in which some of us grow food for our nourishment, others harvest it, others still bring it to the market, a central place for distribution for our survival, others stack the food for us on the shelves, and still others place the food we select in bags for us to carry home…how beautiful! If we could openly acknowledge and embrace this generous collective work and expression of care for each other’s survival, if we could actually recognize each other in the process of feeding each other and caring for each other’s well-being, the world would begin to be a different place.

But consistent with “the rule of aversive presence” manifested on our streets, we replicate the rule everywhere, including this supermarket and in the economy more generally, by using the device of money to allow us to produce and distribute essential material goods, like food, without having to take the risk of openly sharing, of fully entering into each other’s presence in a way that would realize our desire for mutual recognition. Money does not actually exist as a real thing; referring to it, as in “how much money do you have?”, is a shorthand way of talking about a mere number, a quantity assigned randomly at birth and added to or subtracted from throughout life, a number that we collectively utilize as the medium of our separation. Pooled up in our reservoirs of despair (why not be open about it?), we mask the beautiful collaboration that produces the supermarket by enacting the very same reality through a mechanism, or social practice, that assures the maintenance of our mutual distance, our mutual protection against each other’s potential rejection, negation, humiliation. And so it is throughout and across the social practices of the entire capitalist economy—the horders of capital in their tomb-like country homes, the workers scrambling in solitude (unless they are in a good union!) to keep surviving and if possible to acquire their own privately-owned spaces of safety, all of us watching television or scrolling Instagram and lost in the withdrawn fantasies of symbolic life.

If we were to find a way to let go of our mutual fear of each other and let ourselves go out toward each other, out toward entering into each other’s presence, the monkey minds of our withdrawn, impacted selves would begin to dissolve and the world would begin to recover its social fullness. We would begin to move from the neurotic pulled-back vigilance of our withdrawn space and into the hereness and vitality of mutual presence. And this is precisely what occurs in the rising periods of liberatory social movements, in which what “moves” and what “rises” is the human spirit itself coming to realize itself in and through love for the other, in and through a breaking out of mutual recognition of our beautiful common humanity. When social movements of this kind break out, people suddenly recognize each other on the street, new forms of economy start popping up, and an emerging plenitude of mutual presence begins to overcome the fear of the other that we have inherited from prior generations and that we have become unwitting reproducers of.

But even before such a movement is able to ricochet into existence, we can all do our part, wherever we are, to begin to walk side by side. Greet your brothers and sisters around you—they are waiting for you even if they don’t seem to be.

Peter Gabel is editor-at-large of Tikkun, His most recent book, The Desire for Mutual Recognition: Social Movements and the Dissolution of the False Self (Routledge Press, 2018).