“Make a film about life, death, and cinema!” yells his producer, as Zuri, a once successful director hard on his luck, is rolled into an emergency surgery. This ambitious call drives forward “Peaches and Cream” (“Duvduvanim ve-Katsefet” in Hebrew), a loosely autobiographical film by Gur Bentwich. Known as the king of Israeli indie, Bentwich made his name when his debut “Planet Blue” (1995) became the first Israeli cult film, playing midnight screenings in Tel Aviv, where adoring audience knew every line of dialog by heart. That film, structured like a road movie, was a trippy meditation on the meaning of life, loneliness, and human touch. 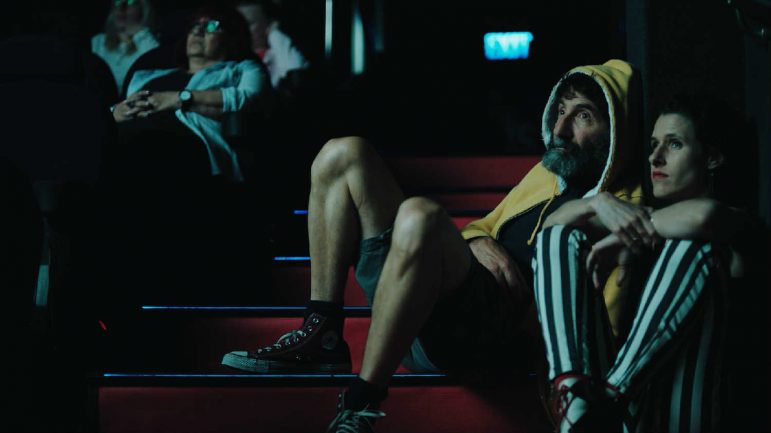 “Peaches & Cream” is also a road film, and an existential journey; but where “Planet Blue” was a revelation and a breath of fresh air, the new film seems to be still stuck in the 90s. We meet Zuri, played by Bentwich himself, as his new film, itself titled “Peaches & Cream,” is failing in movie theaters. For the duration of the next hour-and-a-half, we see Zuri falling apart, in the familiar pattern of a privileged male mid-life crisis (“50s is the new 40s,” says Zuri’s friend who is still partying like thirty years ago). Zuri blames anyone and everyone for his failure: his father, his partner, his producer, and even the schlubs who paste new billboards over the posters of his film. He just doesn’t take responsibility himself. The action takes place on the night of the premiere, as Zuri travels from one place to another in a cab, befriending new people and alienating those close to him, racking up a tab that he can’t cover. Zuri also has an obligatory in such a scenario heart attack, culminating in clinical death, which he experiences as a flight in a posh private jet. The ending is ambiguous: perhaps he survived and grew up, or maybe he is still stuck within his illusions, whether he is dead or alive.

What marks Bentwich’s film particularly out of sync with its time is his cynical commentary on the #MeToo movement. When Zuri meets an attractive young woman who promises to save his film by managing his social media, he hits on her in front of her camera. She confronts him and kicks him out. But she explains to him later that her response was just a stunt to produce click-bait content. In this way, sexual harassment is nothing but a publicity exploit. “Peaches & Cream” exists in its own little world, oblivious to the broader political and cultural contexts, be it in Israel or in the world.

Still, with all its problems, “Peaches & Cream” is not without merit, first because Bentwich makes fun of himself, his cynicism, and narcissistic obsessions. He is possibly the most charismatic and entertaining presence on Israeli screens today, so it’s always interesting to follow his wrinkled, expressive face. His dialogs—Bentwich is a writer-director—are witty and full of character, yet naturalistic; “Peaches & Cream” won the Best Screenplay award at the festival. Finally, the charm of the film is in its casting. Although this may be lost on audience outside of Israel, every part is played by a well-known Israeli director/actor: the cabby is Dover Koshashvili (“Late Marriage”), Zuri’s partner and editor (and also an actual editor of the film) is Maya Kenig (“Off-White Lies”), his friend is Alon Aboutboul (who also starred in “Planet Blue”), and his producer is Tzahi Grad (too many credits to list). Bentwich, tongue-in-cheek, as always, explained during the post-screening q&a, “There is no meta-cinematic comment or deep metaphor in this casting. It’s just much easier to work with directors—they don’t drive you crazy, like actors. They’ve been there, so they just want to make it simple for you.” But maybe simplicity is not such a good thing any longer.