“God of the Piano” and “Red Fields”

They say that the good film score is the one that you are not aware of—it helps us to understand and enjoy the film without drawing attention to itself. This is not the philosophy of “God of the Piano” and “Red Fields”—two works where music is so central to the narrative that without it there would be no film.

“God of the Piano” (“Elohai ha-psanter”), the first feature by young Israeli filmmaker Itay Tal, opens when pianist Anat’s water breaks as she is playing a concert. Her family of distinguished classical musicians rush her to the hospital—even at that tense moment all they talk about is music. Alas, her baby boy is not perfect. When Anat (excellent Naama Preis, who won the Best Actress award for the role) learns that her son is deaf, she is so devastated that she can’t even touch him. She switches the baby, and takes home another newborn, perfectly healthy, albeit without her family’s music gene. 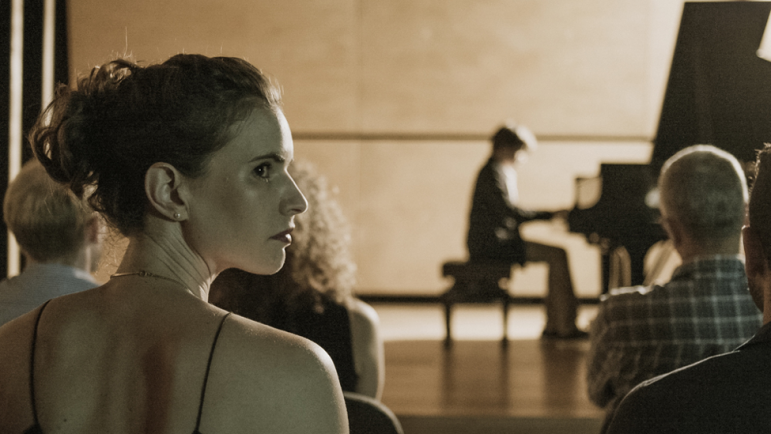 Still from "God of the Piano."

Filmed with the intensity of a psychological thriller, the film follows Anat, the ultimate tiger-mom who cultivates her son’s musical talents with an all-encompassing obsession. But even as she makes unasked-for sacrifices and exhibits super-human dedication, she is haunted by her dark deed, unable to reconcile nurture and nature.

The true hero in this film is music. It is everywhere—a young boy plays for the family, a grandfather shares his first masterpiece, a famous performer writes a piece for his new lover. Each composition is given a spotlight and time to develop and to communicate to us. This is not a film score in a traditional sense, but a hybrid between the medium of classical music and the medium of film. This is a movie not as much for a big screen as for a good sound system.

Another such hybrid at the festival is Keren Yedaya's “Red Fields,” (“Mami” in Hebrew), a cinematic adaptation of an Israeli rock opera that had a cult following in the 1980s. Yedaya is best known for her films focusing on the lives of marginalized women (“Or,” aka “My Treasure,” “Jaffa”). This time she also places such a woman in the center of the narrative, but now she tells the story through songs, set to vibrant and, at times, surreal visuals. The songs were recorded live, performed by such famous Israeli musicians as Dudu Tassa, Riki Gal, Yuval Banay, and Neta Elkayam. The film won both Best Cinematography and Best Original Music awards at the festival.

Elkayam, a charismatic performer with a warm earthy beauty, plays Mami, a young woman stuck in a small development town in the middle of nowhere. We first meet Mami when she is full of hope, despite her no-prospect job at a gas station and the fact that her new husband needs to rush back to the army right after the wedding. Her hopes are crushed when he comes back paralyzed—a “vegetable” in the words of the song.

Trying to escape her sad fate, Mami runs away to Tel Aviv, taking her unresponsive husband along in a wheelchair. As expected, she falls victim of exploitation and violence, but not in any conceivable way. Rather, she is abducted by government scientists, who experiment on her brain and disable what they call “an empathy center.” At that point, the film becomes part sci-fi, part political satire as it follows Mami, who is now devoid of any human feelings. The problem is that along with Mami’s good heart, the narrative disintegrates as well.

Still, even with no logic or coherence, “Red Fields” is worth watching. The musical performances are stellar, cinematography is competent, and the set pieces are funny, especially the one where Riki Gal plays an aging brothel owner, whose song is staged like a cheesy TV ad for her distinguished establishment.