“Born in Jerusalem and Still Alive”

“If there was a terror attack on a bus and 8 people died, you can still go for a beer, and even on a date, because it’s routine,” Ronen explains to a group of tourists. “But if there was a bombing in a café and 15 people died, that’s an exception. You can still go for a beer, because we are stronger than that. But not on a date, because it’s not romantic.” Ronen is the protagonist of the new black comedy and winner of the Best Debut award, “Born in Jerusalem and Still Alive.” He’s a twenty-something schlemiel, leading tours of terror attack sites in his native Jerusalem. This is not a business for him—he doesn’t charge for the tours. Rather, it is his way to heal from the scarring trauma of coming of age in late 1990s-early 2000s, when the violence between Israelis and Palestinians shaped the everyday fabric of life in the region. 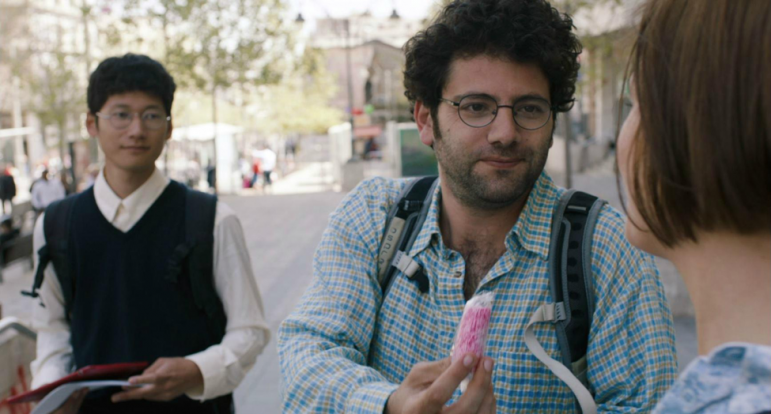 Still from "“Born in Jerusalem and Still Alive."

Ronen is played by first-time writer-director Yossi Atia, who based the script on his real life. Like his protagonist, Atia grew up in the center of Jerusalem, lived through the bombings, was haunted by nightmares at night and fears during the day, and started leading tours as a way of coping. As he told me after the screening, he didn’t plan to make a narrative feature. For years he tried to make a documentary about his tours, but it didn’t work out. Then he made it into a short comedy. Ultimately, he fictionalized his story, added a romantic subplot, and brought it to the veteran Israeli filmmaker, David Ofek, who then co-directed the film with him.

Don’t expect probing investigation into the roots of violence or political complexity from what essentially is a dark rom-com. The occupation and Israel’s oppression don’t figure into the story. But politics do enter the film, just very gently: as Ronen leads his groups through the sites, he points out memorial plaques. “This one is from 1997,” he comments, “It says, ‘May they rest in peace’. But this one is from 2002, it says, ‘May God avenge their deaths’.” In his charming broken English, he explains, “Israeli society became more revenge.”

The film’s main achievement is its insight into the experience of Israelis for whom sudden, violent death was a daily reality. (There are no Palestinians on screen, even though they make up a large part of Jerusalem’s population.) The scenes in which Ronen teaches the tourists the ropes are the best ones. In addition to talking them through dating dilemmas in a time of terror, he demonstrates to his audience how to make a phone call to a loved one after a bombing: “Hi, are you ok? I’m ok. I love you too, bye.” There is a formula to it. Then he distributes to his motley group old flip phones and asks them to make such phone calls, in their mother-tongues. The camera zooms in on the urgent expressions on the tourists’ faces as they make frantic multilingual “calls,” and then fall silent. Scenes like that send chills down the spine.