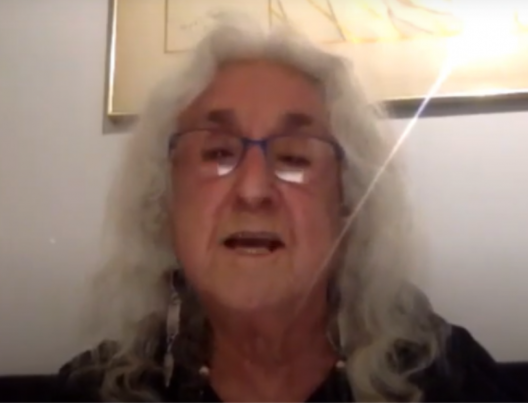 More than twenty years ago, I had the great pleasure and honor of being with Reb Zalman Schacter when he was celebrating Rosh Hashanah at Mt Madonna in the Santa Cruz Mountains.  There was a stream not far from where we were meeting and we went there for tashlich.  Everyone was so happy to be in such a setting, they all went into the water itself to offer up their sins and transgressions.  As I stepped toward the waters on that breathtakingly beautiful and peaceful afternoon, something stopped me.  I could not perform that ritual.

Later, when we had a group discussion, many were concerned about another part of the Service, when Abraham, the father, is offering his son in sacrifice.  I was concerned about the ram.  We cannot continue to offer animal sacrifices for our own benefit, I said. And, I continued, we cannot continue to pollute our waters with our sins and toxins.  We need to honor Creation as the way of honoring the Divine.  We are not the center of the universe.   Our homocentric failure to understand the true nature of the universe leads us to disregard the non-human world and the  essential nature of the myriad beings.  Biodiversity is as central to all life as oxygen and water.  Our reflex to use and exploit rather than to align with and protect is leading to the end of the planet as we know it and the death of all life.  This is not an exaggeration.

An unexpected and profound understanding came to me that day. It came to me through Judaism while it took me on another path.  It took me back to what we call the old, old ways, the earth-centered, spirit-centered universe where all beings live in harmony with each other.

My relationship to Judaism has been profound and idiosyncratic..  My father was a Yiddish writer engaged with Jewish mysticism and Labor Zionism, and so I gained the complex values of a spiritual, political, socially conscious life, if heartbroken by WWI, the Spanish Civil War, WWII and the Holocaust.  We did not go to Temple but we lived a profoundly integrated Jewish life where my father taught me some of the basics, how to read Hebrew, for example, but the teachings came on  a daily basis from the life lived with deep engagement in community, literature, social and spiritual values.

In winter, he wrote every weekend from early morning until late afternoon at his desk, which I now have, looking out the window.  And in the summer, he set up a card table under the cherry tree he had planted on the adjacent strip of land he had managed to purchase for back taxes.  He interrupted his writing work only to tend this piece of land, which he turned into a Victory gardens that gave us many summer meals. Not unlike some contemporary responses to climate dissolution, the negative effects of commercial agriculture and Covid-19.

I learned independence from my father and read every chance I had. I read the Bible on my own many times and was always taken with wonder by the lines, In the beginning….

In the beginning God created the heaven and the earth.

No one interpreted these lines for me and so I took them in as a novelist does, trying to fathom all the dimensions, meanings, implications of those words, trying to decipher from them, how I was to live my life.

Over the years as I left the academic world, an act which increasingly seemed bashert, guided by Spirit, and began teaching on my own, I found myself carrying this simple question:  If we know, from our deep and true experience, that Spirit exists, how then shall we live?

I come to you today, during the greatest crises that the human world has ever faced, during the most dire one hundred years of global human history, to ask you to take on that question: If we believe in the reality of Spirit, in the Divine, in God, how then shall we live?

I was filled that day during the services of the High Holidays with Reb Zalman, with the original awe I felt when I had read the words, “… and the Spirit of God moved on the waters….” I realized that my spiritual loyalty had to be to the manifestation of the Spirit of God in the act of Creation.  I could not be beholden to human concerns alone – with the delusion that they can be separate — when all of Creation requires our attention, not as stewards, but as peers, allies and kin..

The use of fossil fuels and other human activities are diminishing the environment.  I had known it to my horror when we dropped the Bomb and I was only nine years old then.  The Anthropocene, or Age of Man, will be designated as an epoch because the human effect – the extreme negative human effect on the environment has become clear. American biologist Eugene Stoermer coined the term in the late 1980s and Dutch chemist and Nobelist Paul Crutzen brought it our attention in 2000.  Today, twenty years later, we all know.

Seven days to create the world and a few years to destroy it.

However, is this the only trajectory?

Every year the High Holidays offer us possibility. It is a remarkable demand and privilege to partake of these ten days.  But to meet this sacred opportunity, we have to change our ways — radically.   To do this we have to question all our habits, assumptions, beliefs, ways of life and be willing to shift.  No, not shift, but reconceive, re-imagine, alter, transform.  The changes required of each of us are equal to the gravity of the situation.

Here we are at the Days of Awe.  Days when we enter into the deepest possible reflection on our lives in order to consider with ruthless honesty the harm we have done, the injuries inflicted and then we are called to make amends. This self-scrutiny that each of us is called to engage cannot be performed on a superficial level. And the motivation cannot be so that our individual lives and the lives of our kin and those we love be entered in the book of life.  In these times, the prayer needs be on behalf of all life.

It’s not too late to register for Beyt Tikkun’s Yom Kippur services at which we will hear a talk from Bill McKibben – www.tikkun.org/hh2020

I no longer think of repentance. It is insufficient without changing behavior, without considering our on-going responsibility without meeting the spiritual requirement to consider the consequences of our ordinary and familiar behavior, and then to change,  Repentance, even making amends, are insufficient if we do not spend the rest of the year, of our lives, bearing witness to the effect of our behavior and life style and our collusion in what destroys, and then in daily focus on divesting from these ways.

Several years ago I gave a lecture at Palo Alto University. on ReVisioning Medicine, which I have conceived and convened since 2004 As it happened the parking lot was next to a small grove of Redwood Trees.  As I walked past them to the auditorium, the Trees said, “Tell them we only have 12 years.” I was startled. These were not my thoughts, but I knew when I heard them that they were referring to the October 8th 2018 Summary for Policymakers of IPCC, the International Panel on Climate Change Special Report on Global Warming of 1.5°C

Now we have only nine years and we have not in any way changed the outlook.

Rather, since then, the Amazon, Australia and the US west have been burning. More than 2.5 million acres have burned in California, and what about the wild life and the trees?  The Derecho devastated Iowa.  Lake Charles Louisiana, India, Pakistan, China, Nepal, Vietnam, Afghanistan and Turkey were devastated by flooding and we are fearing this hurricane season in this country.

Let us pause also to note the climate change associated pandemic of 26 million+ cases, more than 860,000 dead worldwide.  We lost 58.000 military deaths in Vietnam which was, for many of you, the war, of your lifetime, and 189,000 to the pandemic.

How will we change?

Indigenous people know how to live on the planet in right relationship to all the beings.  They understand inter-dependence and inter-connection.  We, Western people, Imperial people, Colonizers, Settlers do not. Indigenous people and all the beings of the natural world understand the profound laws of the natural world and live accordingly, or lived accordingly, until we imposed our ways.

Life flourishes when people and tribes think we rather than I.  When they think of all beings, Mitakuye Oyasin as the Lakota Sioux say, “all my relations. All our relations.”

The rigor of these times calls us to learn these ways.  To become quick studies.  We may have knowledge but the natural world has wisdom.  When we plunder it and decimate it, all life, including ours, dies.

We were born into a Garden and we were thrown out.  But the Native People laugh and say they never had to leave. They know how to live in the Garden.

Now it is up to us to learn again.  To return to the old, old ways and align with the wisdom of the natural world, and all the beings, and live accordingly so that we may all live, so all life will flourish.  This, I believe, is the mandate for these Holy days.

Deena Metzger is a writer, healer and advocate on behalf of the natural world and all its beings living at the end of the road in Topanga, California. She has hosted Daré for 20years, community gatherings on behalf of healing and vision, at her home which is considered a village sanctuary for all beings. Her books which speak to this issue include Intimate Nature: The Bond Between Women and Animals (edited with Linda Hogan and Brenda Peterson); and her most recent novels, Feral, La Negra y Blanca, winner of 2012 Oakland PEN Award for Literature, A Rain of Night Bird and The Burden of Light, her latest poetry, deenametzger@icloud.com and deenametzger.net.