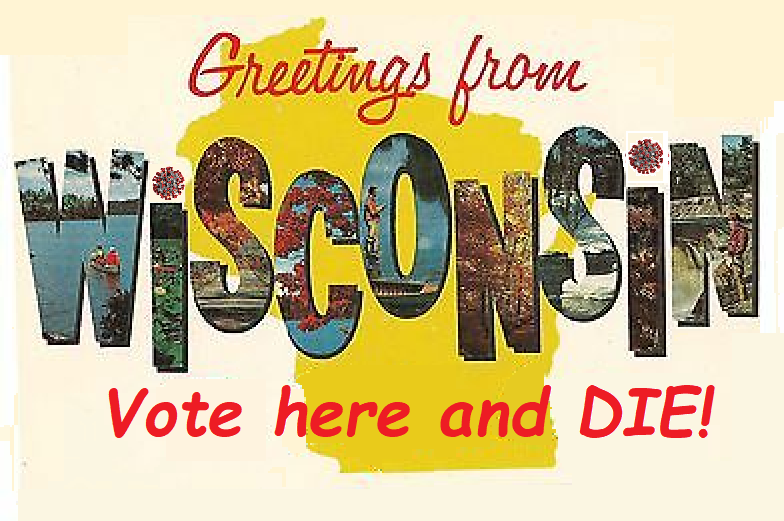 Warning: Wrath follows…and underlying it, if you must know, heartbreak.

News item: “On April 6, 2020, the Wisconsin state supreme court voted 4-2 to enjoin an executive order issued earlier in the day by Governor Tony Evers (D) postponing in-person voting in the spring election, scheduled for April 7, 2020, to June 9, 2020. As a result, in-person voting was expected to take place as scheduled on April 7, 2020. Also on April 6, 2020, the Supreme Court of the United States voted 5-4 to stay a district court order that had extended the absentee voting deadline. As a result, the absentee ballot postmark and return deadlines were reinstated to April 7, 2020.”

I know it is rarely wise to post in the heat of anger…but dayenu, enough is f’ing enough. What the Republican-dominated Wisconsin judiciary did and what the Supreme Court conservative majority has wrought upon voters in Wisconsin is beyond shameful, it is criminal; they have blood on their hands. Full stop. As NPR put it, “In Wisconsin, Gov. Tony Evers and his fellow Democrats pushed for a range of changes to the primary process, including rescheduling the election and switching to mail-in voting. But Democrats faced a wall of resistance from Republicans who saw political advantage in leaving existing procedures intact.” Meaning: political advantage trumps (which is to say, threatens) life itself. As my mother, zikhrona livracha (may her memory be a blessing), used to say in a prescient amalgam of Yiddish and German, “Meshugge ist trumpf.” Madness has triumphed, but also: Trump is the very essence of lethal (contagious?) madness.

And so:
To those jurists, who from a position of comfort and privilege, forced those who wished to exercise their constitutional right to vote, forced them to stand for minutes on end in line amid a deadly pandemic, to risk their very lives, I have only contempt. I feel disgust in my bones. I spit out the taste of their cruelty, their poisonous perversion of justice, their farbissina (embittered) embrace of venal political ends. In my fantasy, I want those Republican legislators, those four blinkered state jurists, and the five conservative justices of the Supreme Court, to stand in line with those brave Wisconsin voters. To witness first-hand those voters who came with their canes and their supplemental oxygen, their vulnerabilities and fear, I want these justices to hear the coughs and smell the fear, I want them to stand in line for hours amidst these voters…and when these so-called “justices” get to the head of the line, I want them to Sisyphus-like go back to the end of the line and start over, over and over, bearing witness to what they have wrought. I want them to live with the fear they have needlessly amped up, to tremble for oh, “5 to 12 days,” if not longer. With the hope that maybe teshuvah/transformed consciousness can happen, that compassion can blossom in those judges’ hardened hearts. That their fever will break.

And at the end of the voting, I want these same “wise decisors” to watch people in hospitals on ventilators, separated from their loved ones; I want these justices to see in real-time the fear-stricken families of doctors and health care workers and truck drivers and grocers, who maybe are-maybe-aren’t-maybe-aren’t-yet Coronavirus positive. I would quarantine those decisors in a small cubicle devoid of creature comforts. And there I would force them to watch on a small screen, an endless loop of videos of the ill in the hospitals, and those being rushed to the hospitals. I would periodically broadcast the judges watching these videos, to subject them to a panopticon for the powerful. And when that would seem too much, when it would only be humane to give these justices a break—for as the Talmud teaches even those in Gehinom/Hell get respite on Shabbat—I would (for fun) beam these privileged ones into the asphyxiated brain of the man news correspondents call “Mr. President,” so that they could take up residence there for an hour or two in that Trumpian brain, so that they could follow those thoughts, careening from phrase to disjointed phrase, white water rafting without a life-raft amid those turgid and cold waters. Buffeted and bludgeoned bloody by the whiplash rantings of this “Leader of the Free World,” who has given new meaning to the term, Bully Pulpit.

For the next few days, I would broadcast in hell-ogen lights the names of those in our highest court who didn’t vote for a humane extension amid a pandemic (as though this was business as usual!). I’d etch their names in cold Milwaukee concrete forming a Walk of Judicial Shame: Roberts, who l usually respect, and Kavanaugh, Gorsuch (who is no Merrick Garland, nebbekh [alas]), Alito, and Thomas. Stumblestones of a different, shameful stripe.

And I wouldn’t release these men for further judicial activity until it was safe to congregate again, alongside Trump perhaps, each of them sporting a Scarlet C on their robes. And when, you ask, will this be? On Easter, perhaps, or whenever a vaccine for the Coronavirus is ready.
Whichever comes…last.

Rabbi Elliot Ginsburg is a professor of Jewish Thought and Mysticism at the University of Michigan in Ann Arbor, the founding Rabbi of the Pardes Hannah minyan, as well as a senior teacher in the ALEPH (Jewish Renewal) Ordination Program. He is the author of two books and numerous articles on Jewish Mysticism and combines intellectual engagement with a commitment to spiritual practice.

6 thoughts on “Considering the Wisconsin Election While Meditating on Heschel”