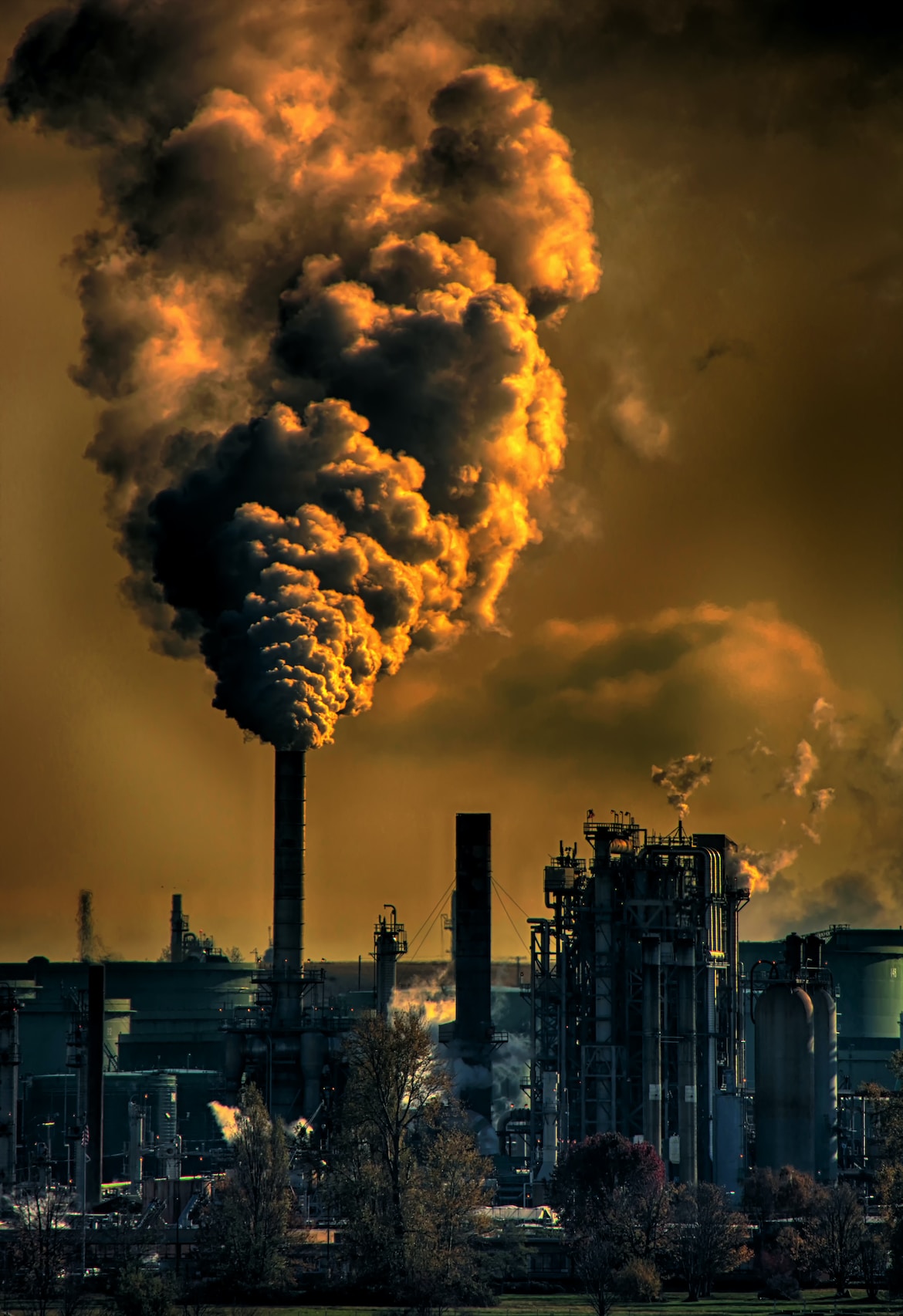 Photo by Chris LeBoutillier on Unsplash

Four interconnected pieces of climate change-related news from the past two weeks reveal America's predicament. And they also show the way forward, which ultimately must include oil companies' paying restitution for damage that they have done to the climate and humanity for decades.

The first of the four pieces of climate news is the deadly heat wave hitting the western US and Canada, killing hundreds to date. According to the United Nations, there has been a "staggering increase" in the frequency of such extreme climate events. The earth is now warmer than at any time in the past 12,000 years.

The second is President Joe Biden's infrastructure plan. The Biden plan aims, in part, to join with other nations to build a new 21st-century infrastructure based on renewable energy, electric vehicles and other zero-carbon technologies in order to stop human-induced climate change. To achieve the global aim of limiting global warming to 1.5 degrees Celsius (2.7 degrees Fahrenheit), the world's energy system should be decarbonized by 2050, along the lines described in a recent report by the International Energy Agency on achieving net-zero by 2050.

As usual, Republican leaders lined up against the parts of the plan aimed at reducing carbon emissions. Senate Minority Leader Mitch McConnell declared, "The total amount of funding it would direct to roads, bridges, ports, waterways and airports combined adds up to less than what it would spend just on electric cars," and that "The far left sees a strong family resemblance between these proposals and their socialist 'Green New Deal.'" The GOP was joined by Democratic West Virginia Sen. Joe Manchin, whose campaigns are amply funded by the oil and gas industry and coal mining.

The third is the wonderful new Greenpeace UK exposè on ExxonMobil lobbying. Posing as a headhunter, a Greenpeace activist secretly videotaped Keith McCoy, an ExxonMobil lobbyist, explaining the tools of his trade. "Did we aggressively fight against some of the science? Yes," McCoy said. "Did we join some shadow groups to work against some of the early efforts? Yes, that's true. But there's nothing illegal about that. We were looking out for our investments. We were looking out for our shareholders."

The lobbyist explained that ExxonMobil's "support" for a carbon tax is just for show. "Nobody is going to propose a tax on all Americans. The cynical side of me says we kind of know that. But it gives us a talking point. We can say, 'What is ExxonMobil for? We're for a carbon tax.'"

Most importantly, the lobbyist compared lobbying to fishing for Congressmen. You "kind of reel them in." "Because they're a captive audience. They know they need you and I need them." McCoy identified 11 US senators he says are "crucial" to Exxon and describes Manchin as "the kingmaker." He said that he talked "to his office every week " (Manchin's office did not respond to CNN's request for comment.)

McCoy apologized (though claimed some of his statements were taken out of context), while ExxonMobil's CEO declared that the lobbyist's comments "in no way represent the company's position" on climate policy and its commitment to carbon pricing. Yet Harvard researchers have argued that ExxonMobil has a record of misleading the public that goes back decades. The company has denied that too, claiming the study was activist-funded.

ExxonMobil's lobbying per se is not illegal. That's part of the problem. We have a political system that promotes narrow corporate interests above the common good. By misleading the public over many decades, ExxonMobil has compounded the political failure.

Even ExxonMobil's shareholders are in revolt against the company management's disgusting resistance to reality. A hedge fund investor won a high-profile proxy fight this past spring to add three new members to the ExxonMobil board of directors who will advocate for the company to adopt a decarbonization policy. The hedge fund argued to the other shareholders that for ExxonMobil to continue down the path of carbon energy is a dead-end, a sure way to strand assets, and a majority agreed.

The fourth is the European Union's consideration of plans to end the sales of oil-using internal combustion engine (ICE) vehicles by 2035 and to replace them with electric and other zero-emission vehicles (such as hydrogen fuel-cell vehicles). In Europe, the oil-and-gas industry is much less powerful politically than in the United States. Recently, a Dutch court in The Hague ordered Royal Dutch Shell to slash the emissions from its products. The European Union as a whole is moving forward with a European Green Deal to decarbonize the EU energy system no later than 2050. In line with the European plans, Volkswagen recently declared its intention to phase out ICEs in Europe by 2035.

As in so many areas of public life, America is suffering from a broken political system that sells public policies to the highest bidders and the best-organized lobbies. The oil and gas lobby gave nearly $140 million in campaign contributions in the 2020 election cycle, $75 million through individual and PAC contributions and the rest in soft money. Of the $75 million, $63 million, or 84%, went to Republican candidates.

This is "fishing" for Congressmen, indeed. Yet as a result the companies are not merely making ill-gotten gains. Their products are killing fellow Americans and creating havoc worldwide. It's time for them to pay for this repeated, long-standing, knowing and shocking malfeasance.

ExxonMobil and the other big oil companies owe not only a profound mea culpa to the world for pushing dangerous products, but also restitution for the damage they have caused. As with the drug companies that pushed addictive painkillers on Americans and tobacco companies that pushed killer cigarettes, it's time for the oil industry to pay heavy penalties on ill-gotten gains, the flip side of which are the death and destruction caused by extreme climate events.

ExxonMobil has a market capitalization of around $260 billion. These and other oil and gas companies should be charged a corporate income tax surcharge to reflect the social cost of carbon of their oil and gas products, now estimated to be around $51 per metric ton of CO2 emissions. Tax penalties should include damages from past emissions as well as ongoing production. Up till now, as a result of America's pay-to-play politics, the companies have received tax benefits instead of paying tax surcharges.

By charging an income-tax surcharge, the companies would not only pay restitution to society, but would face the incentive to change course before they create a complete disaster for the world. The funds raised by such a surcharge could then help to fund the modernization of infrastructure that America so desperately needs, including the shift to green technologies that protect the planet.

America still has a chance to save itself. Biden is on the right course. In addition to the scaled-down "bipartisan" infrastructure agreement that strips out clean energy, the Democrats are planning a reconciliation bill that includes Biden's clean energy policy. The American people overwhelmingly support policies to limit climate change.

America's test, therefore, has come down to the question of honesty, honor and survival. Can we overcome corporate greed and a broken political system to save our nation and our world?

Jeffrey Sachs was once a major advisor to countries seeking to compete effectively in the global capitalist marketplace. He is one of the very few economists who came to recognize the destructiveness of global capitalism to the environment. Tikkun has welcomed opportunities to reprint his articles.
--Rabbi Michael Lerner, editor, Tikkun rabbilerner.tikkun@gmail.com

(this article originally appeared in CNN.com)

It's time for Big Oil to pay us back. https://t.co/XDn2x0Nlqp