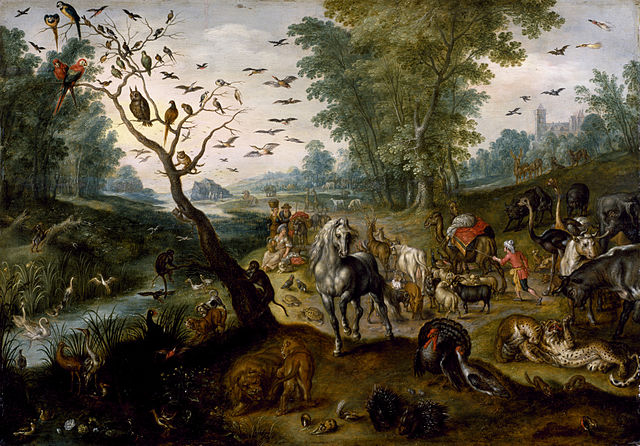 Leonardo Boff asserts: "Whether one acknowledges the dignity of animals depends on that person’s paradigm (vision of the world and values)." Boff breaks down the two paradigms which we need to subvert in order to grow our ecological consciousness.

Healing Ourselves and the Earth

Get insight into the spiritual healing that accompanies cover artist Orly Faya's process of painting people in the world.

Ecological Civilization and the New Enlightenment

In the era of a new Enlightenment, there must be new understanding of shared power and community to help our environment thrive.

Highlighting the mystery of a new wholeness in community, text, organization or a piece of artwork.

Juan Cole argues that the real threat to homeland security isn't "fringe radicals" in the Middle East but our own environmentally destructive habits.

The Invisible Monster of Climate Change

It's all too easy to envision the disintegration of climate and democracy in John Feffer's engrossing piece "A Fairy Tale from 2050" coming true in the very near future.

Global Population and the Insane Policy of US State Dept.

In the wake of the U.S. State Department eliminating American contributions to the United Nations Population Fund, Mary Anne Mercer reminds us of the importance of family planning.

March for the Environment April 29

Fight against climate change by joining us on April 22 in Washington DC for the #ClimateMarch.

Jeffrey D. Sachs makes it clear why we need to switch to a low-fuel economy.

Soaring Temperature of the Oceans

Oliver Milman argues us that the soaring temperature of the oceans is the greatest hidden challenge of our generation.

Stand Together or Starve Alone

Food insecurity in the U.S. has increased since the beginning of the century. Mark Winne argues that to reverse this trend, food advocates need to collaborate.

There are four threats that our Common Home faces, and which demand from us our special attention.

The first is how in modern times the Earth is viewed as an object of ruthless exploitation, seeking only the greatest profits, without regard to life or purpose. This vision, that has brought undeniable benefits, has also created a dis-equilibrium in all the ecosystems, which has caused the present generalized ecological crisis. With that vision entire nations were destroyed, as in Latin America, where the Atlantic jungles, and, in part, the Amazon rain forests, have been devastated.

In January 2015, 18 scientists published in the well known magazine Science, a study on   “The planetary limits: a guide for a human development on a planet in mutation”. They enumerated 9 fundamental aspects for the continuity of life. Among them were climate equilibrium, maintenance of bio-diversity, preservation of the ozone layer, and control of acidity of the oceans. All of these aspects are in a state of decline. But two, that they call the "fundamental limits", are the most degraded: through climate change and the extinction of species.

Editor's note: If you are going to any environmental event in the next few months, (e.g. a Tu B'shvat seder this coming weekend) please ask the attendees to read this very important article by Bill McKibben. Unfortunately, though McKibben recognizes the urgency and to some extent the futility of trying to stop the fossil fuel industry one struggle at a time, he eschews any national strategy. The rest of us need to do better--by insisting that any candidate we vote for any public office in 2016 (from Bernie or Hillary to...well, whoever,in any political party or independent) commit to supporting a mandatory ban on extracting more fossil fuel from the earth than we are already extracting now (which is way too much). This is also where we should be insisting on our elected officials taking steps to pass the ESRA--Environmental and Social Responsibility Amendment to the U.S. Constitution--because although a constitutional amendment may take years to pass, it is the only solution that could bypass the pro-business decisions of a Supreme Court that will declare unconstitutional any legislation that impedes the ability of corporations to maximize their profits. Please re-read it ( www.tikkun.org/esra)  and start getting your state and federal legislators (and your city councils and county governments) to endorse it and start the process of amending the constitution, else we are stuck with the hapless task of thousands of battles, some of which will be won but many of which will not.

This Holiday Season Let’s Redefine Over-Consumption
By Rev. Brooks Berndt
A common lament around this time of the year is the rampant consumerism of a culture that bombards us with messages to buy more and more. As the complaint often goes, holidays like Christmas and Chanukah lose their original meaning as we get lost in a marketplace of inflated wants and needs. All of this is certainly true, and I would add my voice to the chorus of holiday disgruntlement. At the same time, might there be a bigger picture that often gets missed in how we define and delineate the problem of over-consumption? My own thinking on this matter was recently challenged by Jennifer Kehl who directs the Center for Water Policy at the University of Wisconsin-Milwaukee.

Demonstrations for Environmental Sanity Around the World as Paris Talks Open

November 30, 2015  Paris, France
Demonstrations for Environmental Sanity Around the World as Paris Talks Open
We did it! Despite losing our flagship Paris event, this weekend's Global Climate March still broke records as the largest climate mobilisation in history! From São Paulo to Sydney, 785,000 of us shook the ground in over 2,300 events in 175 countries, united in one voice calling for a 100% clean energy future to save everything we love. It was front page media worldwide, and the impact is already being felt at the summit here in Paris. It’s nearly impossible to describe the powerful and diverse beauty of humanity that rose up yesterday, but these photos help:
London, UK
This is the movement our world has been waiting for. Many countries, from Bangladesh to Ireland, saw the largest climate marches in their history. In Australia, 120,000 people marched, in India, over 100,000. And in towns across the planet small groups of us joined together in beautiful local events.