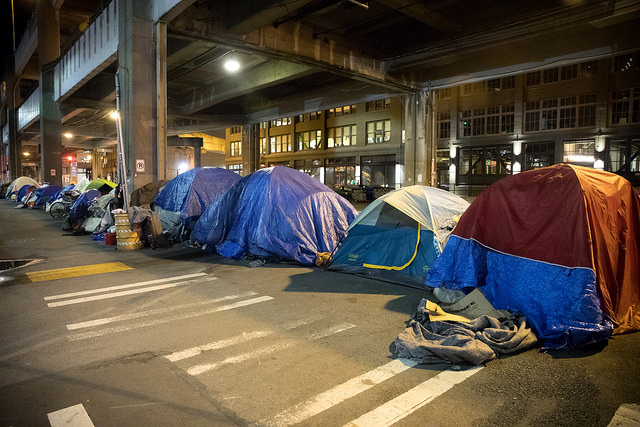 A fifty-year-old homeless woman sat on a plastic crate, slumped against the telephone pole in front of Seattle’s Whole Foods. Long, snow-white hair framed her face and highlighted her blue eyes. Her eyes signaled a sense of distress. She had sat in this same location almost daily for months in her heavy brown jacket and a blanket that swaddled her legs and lovingly covered her two sandy colored Pit bulls. They huddled together keeping each other warm. She had little to no food, and I encountered her every time I shopped for organic, cage-free, omega 3 eggs. I had mixed feelings each time I walked by her, not sure what was the right thing to do or how to reconcile my personal prosperity with the ever-growing homelessness crisis in Seattle. Over 12,000 people are homeless in Seattle/King County, half of them living on the street, in parks, tents, or vehicles.

My heart felt distressed when I saw homeless people. When I worked for Microsoft, I was able to use my connections to help get people off the streets and into office jobs. In my thirties, I befriended Lawrence, a kind, homeless man in his late forties. I paid Lawrence for work around our house, fed him, and drove him around on errands for three weeks. Our friendship took a turn when his boundless requests for help increased in frequency and scope. I started feeling uneasy, unsafe, and like a patsy. Around that same time, the news reported a homeless man — who did odd jobs just like Lawrence — killing a family. Sadly, my compassion turned to fear, and I let Lawrence know that our work was complete.

Cynicism, doubt, and confusion grew as more of these kinds of interactions continued. I started questioning whether boundless giving to the homeless made any difference or if it was an exercise in futility. Some days I walked quickly past homeless people on the street because denial of their suffering was easier than reconciling my inner conflict. According to mental health experts I’ve interviewed, many people who live on the street have untreated mental disorders, and it is hard for some of them to ever truly change.

I suspected that the Whole Foods woman, Liz, had some sort of mental disability or illness. I occasionally bought her oatmeal or soup and we exchanged nods and a hello. One time, I bought her a turkey sandwich and felt conflicted when she fed it to her dog. But as a mother, I understood that you need to feed your babies first. Some days she’d be lucid and return a friendly hello. Other days she stared blankly at me as if I was a stranger. This past December, I started to worry about Liz.

“It’s supposed to go below zero tonight, Liz. Do you have warm place to stay tonight?” I asked her.

“I have my van,” she pointed to a beat up 1980’s black Chevy van in the Whole Foods parking lot.

My heart sank. I was determined to find a better solution. I asked a nearby police officer for ideas and he wrote down three homeless shelters with available rooms. I offered the list to Liz.

“None of those shelters accept dogs. I won’t abandon my dogs. They are all I have,” she said adamantly with motherly conviction.

I was touched by her devotion, responsibility, and love for her dogs and wondered whether I would be as selfless under the same scenario.

“What else could I help you with to keep you warm?” I asked.

“Long johns, but I need XXL,” she replied bashfully.

I went to several local stores, but it was an unusual size. I found some online but Liz wouldn’t get them right away. I wanted to do something to keep her warm now, so I found a beautiful soft gray hat and scarf set in a nearby store.

“I thought these would look pretty with your hair and eyes” I said handing over the set.

“Do you know it’s my birthday today?” she closed her eyes and bent her head toward the ground. “I don’t remember the last time I got a gift,” she said with a smile.

For a moment, I felt happy. But it didn’t last long as I thought about walking back to my warm house, loving family, and steak dinner. I began to feel ashamed, even guilty. Should I have invited her to sleep in our house?

A few months later, I was coming back from a yoga class and saw Liz. She was crying and visibly distressed. Several people walked right by her as if she was invisible, as I have done, too.

“I’m just a worthless piece of trash. No one looks me in the eyes. I’m invisible. No one cares about me,” she quietly sobbed.

I felt helpless as I watched her.

“Can I give you a hug?” I asked and she nodded back.

“I care about you. Don’t say that about yourself. What’s going on?” I said as I sat next to her on the sidewalk.

Her housing application had been rejected again.

Liz used to live nearby and had a job as a special education teacher in public school but was laid off. Then her rental house was converted into a condo and she could no longer afford the rent. She was a casualty of Seattle’s rents, which a year ago were rising about eight times faster than the national average.  She was a foster child and had no family except her dogs. Now, she lived in her van. Her van was safer and more hygienic than living in a homeless shelter. Her only friend was her apartment neighbor with epilepsy and schizophrenia who also got displaced and now lived under Liz’s care in her van.

Despite Liz’s sharing her story with me, she seemed to intermittently remember and then not remember me over the following months, which I found out six months later was due to her delayed comprehension disorder. Last April, she stopped me as I walked into Whole Foods.

“Hey, come here. I want to give something to you,” Liz gestured. She handed me a tiny lined notebook covered with a pastoral scene of animals and flowers.

“You don’t have to do that. Are you sure?” I said feeling awkward about accepting a gift from a homeless woman.

“Thank you for listening to me and helping me,” she said.

“It’s beautiful. Thank you,” I said, taken by the spirit of her generosity.

Her care for others seemed boundless. Special needs students, dogs, an epileptic friend, and now I was gifted by her kindness.

While I may not change the homeless epidemic or save anyone, Liz and I changed each other’s outlook for a brief moment. And perhaps, that’s the first place to start in narrowing the divide. It’s been four months since I last saw Liz. Today, she sat with a new sign that read “I’m a person, too. Can you see me?”  While I was saddened to see her at the corner again, I was happy to see that her story, like mine is continuing.

While I was trying to save her, it was Liz who saved me from my growing cynicism and fear.

C.J. Rosenblatt (Liu) is a radio talk show host and producer of the Fire it UP with CJ Show on IHeart and YouTube.  She is an Executive Coach who works helping business leaders navigate transition and move toward lives with  more meaning and happiness.