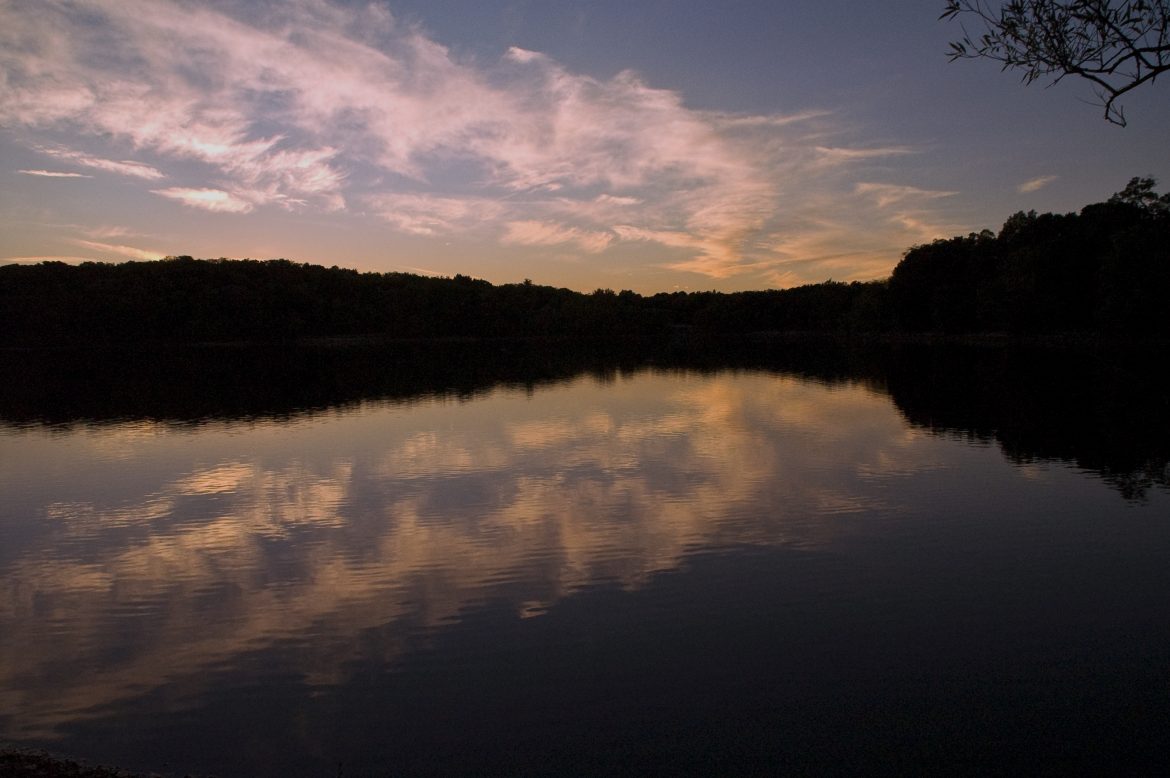 [This essay is adapted from Morality and the Environmental Crisis, Cambridge University Press, April 2019]

Democracy, we said, means everyone gets a vote. (‘Everyone,” initially limited, has gotten increasingly inclusive.) But democracy, various theorists have argued, doesn’t just mean isolated strangers voting in closed booth. It means—or should mean—conversation, deliberation, frequent and serious exchange of needs, experience, beliefs, and hopes. And, other theorists went on, conversation doesn’t just include argument and assertion, but the expression of emotion, bodily comportment, sighs and tears and laughter. It should include the full expression of who we are and what we feel. Only then can the full community deliberate on how it should conduct itself.

Can we go further? In the realm of non-verbal communication, could we include beings that don’t speak a human language, never will, and never could? As we represent the interests of infants or the aged or those in comas, doing our best to care for them and recognizing their limited but real membership in our political community, could we go even further and expand beyond the human into an ecological democracy?

To do so we would have to overcome millennia of alienation from nature; scientific practice that took the domination of the non-human as its only goal; endless pursuit of consumption, displacement, and expansion; contempt for communities that saw nature as kin; and the devaluation of women as more “natural”—and thus inferior to—men. It would require that we heal the sounds, find ways to reconnect, and learn to hear nature’s voice.

The expansion of the initially racist and sexist understanding of democracy required the recognition of the humanity of the Other. Yet the kinds of communication that can heal the wounds of race, religion or gender—biographies of oppression, fiction that highlights lived experiences, political demands by the oppressed—cannot arise between people and a ravaged earth. Dolphins do not pray in words as we do so there will be no “interfaith” services with them like the ones in which Jews, Christians, and Muslims awaken to their shared spiritual and political destinies. For nearly two centuries feminists have offered new political perspectives and forcefully critiqued justifications of patriarchy. But rivers cannot demand recognition.

Therefore in the case of nature the ways in which societies might enlarge moral vision and therefore political democracy must take a different form. We will have to take very seriously some other parts of ourselves than those which we usually stress so much. If rivers and dolphins are to be part of our community without claiming their rights, then we have to see that there is part of us which has value beyond our self-representing, self-interested egos; our demands and preferences; our culturally masculine denial of vulnerability and assumed superiority over a nature and women thought of as fleshy, emotional, and non-rational.

You get up in the morning, see your parents or children or roommates. “How are you?” you may ask. You might notice them smiling or frowning, high energy or fighting through a hangover. If your neighbor of many years doesn’t sit on her front porch anymore; if the people you regularly communicate with through tweets or Facebook posts or email or even a monthly phone call—if these people don’t email, call or tweet, you sense a possible problem, you reach out, you care. If you read of communities devastated by hurricanes, you might send a contribution or even organize supplies to be sent. You probably like it when Riff the dog or Fluffy the cat greet you with their customary tail wag or purr; and if they lie in corner, head on their paws, and barely look up when you arrive, you know that something isn’t right.

This last sense of connection is not in language. And it is available to anyone—of any race or gender, nationality or religion, at virtually any historical period. Notice what it takes to connect with Riff and Fluffy: attention to the details of the body, empathy with subtle emotional cues (the drooping tail, the lack of expression in the eyes), and an imaginative extension of ourselves into their experience. But this experience, and here is perhaps the key point, resides in something within ourselves that is not tied to social identity or complicated self-descriptions. We cannot do this as lawyers or plumbers, Republicans or New Yorkers. It is not because we fervently believe in Christ or Marx, have parents who are successful brain surgeons or children who’ve gotten into Stanford, or prefer Apple to PC or rap to opera. Something else must come into play, for something other than all these things is at stake. And the possibility of ecological democracy, and of an adequate response to the environmental crisis at all, depends on our capacity to realize this.

The basis of our communion with nature is that we are beings that breathe and eat, sense the sun, feel the wind and rain, experience love, fear, and pleasure in our bodies, have an identity bounded by birth and death, and get to share this planet.

How can we connect?

If the trees root to the earth, so do—in rather more mobile ways—our own legs. If the earth’s surface is eighty percent ocean so is our own body. Human children frolicking in the grass surely can remind us of kittens playing, and ten thousand ants working together are not, seen in a certain light, all that different from workers headed for a day at the office. As the trees breathe out, we breathe in—and vice versa. We seek our own existence, our own lives; and so do the pigeons picking up crumbs in the park, the rats scurrying to the open garbage cans, seeds sprouting beneath the earth. Everything that is alive senses its surroundings, signals what it wants or is repelled by, seeks a fit for itself in where it lives. And the physical world provides for all this life: with minerals, gases, sources of energy, and food. The winds scatter seeds, the rocks are eroded into minerals, the water supports just about every life form.

What could help human beings recognize their own natural, as well as social, identity? Perhaps we might notice that when people pay detailed attention to animals with whom they are in an intimate ecological relationship that they can learn to sense the animals’ reality in a way people who just see the animals as biological subjects or sources of amusement cannot. For example, Barry Lopez recounts how Eskimos knew things about wolf prints that no academic “wolf experts” could match. The natives had learned to see the game, follow tracks, and know the habits of living beings with whom they could not talk in words.[1] They could only do this because they came in touch with the “wolf” part of themselves. Buddhist deep ecologist Joanna Macy suggests that we see ourselves as beings every atom of whose bodies were formed by the great fireball of the Big Bang fourteen billion years ago. [2] Just as Americans or Jews or Native Americans may understand themselves as having an identity constituted in part by a shared history, so all human beings can realize that the most basic building blocks of their bodies share a history with the rest of the universe.

Indigenous animist perspectives reject the essentially anthropocentric perspective in which “person” is a sub-category of “human.” The Ojibwa, for instance, see “person” as encompassing the human, the animal, the wind, and the water, etc. Of course many of these persons cannot do many of things humans can; but people cannot do what wind or water can either. And the mountain, the stream, or the ant have a particular character of being, a range of qualities of existence that provoke in us qualities of experience that can be felt as real, significant, and worthy of respect as the particular qualities of the humans we encounter. We have all been taught by the modern fusion of science, technology, and capitalism to know a tree by cutting it down and seeing what it’s made of and can be “good” for. This other perspective gets to know a tree by talking to it.[3]

It is in these sense that nature become “kin,” and thus—with articulate and knowledgeable human representation—could be part of an ecological democracy.

For example: Although I live within the city of Boston, I am fortunate to be just a few blocks from a lovely pond. A mile and a half around, surrounded by trees, graced by turtles, seagulls, geese, cormorants, the occasional heron, and a few magnificent white swans, the pond reflects the changing sky of moon, sun, snow, and rain, and offers a space for joggers, lovers, pensive dog walkers, and frisky dogs. It serves as a source of natural beauty for harried, overworked, chronically anxious city dwellers; and as a kind of emotional transfer station. People go to the pond feeling depressed, at a loss, hemmed in by life—and come back feeling a bit more hopeful, a bit lighter in spirit and mind, a bit more—strange to say—alive. 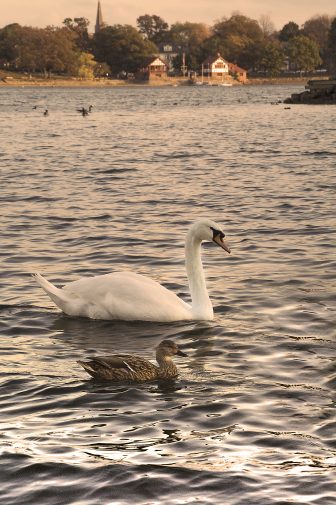 For me, Jamaica Pond is kin. I’ve lived near it virtually all of my adult life, and turned to it countless times for recreation, pleasure, and emotional and spiritual sustenance. I know each curve of the path the surrounds it; the order of the trees flowering in spring; the colors that will emerge in the fall; what it looks like by moonlight when it’s frozen in February; and how the far side, a wooded hillside, glows with sunset colors. I’ve taken countless “nature” photographs of it; jogged (increasingly slowly over the years) around it thousands of times, and shared excited moments with strangers by pointing out turtles sunning themselves on a fallen branch or a blue heron standing in the shallows.

I grieve for the destruction of the rainforest and the beaches covered with plastic refuse in the isolated islands of the Pacific. But these I know only from second hand sources: pictures on my computer screen, articles from journalists. But if something goes wrong in the pond, I know it. When a beloved tree falls from age or illness, I run my hands over the trunk and whisper a blessing. When pollution was washed in from unusually high rainfall, I could smell it. And in the value this Pond has for me and countless others, and in the knowledge we can develop of it, there is a way for the interests of the Pond (with all its trees, fish, birds, and insects) to be part of our community. And as part of our community, then part of our political system as well.

Roger S. Gottlieb, professor of philosophy at Worcester Polytechnic Institute and associate editor of Tikkun, is the author/editor of 21 books on political theory, ethics, environmentalism, religious studies, and contemporary spirituality. This essay is adapted from his new book: Morality and the Environmental Crisis (Cambridge University Press).