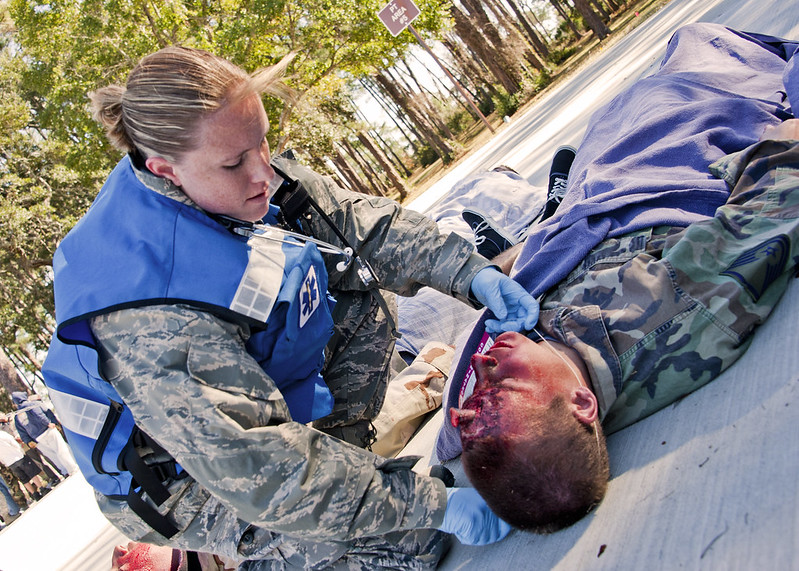 Triage means exclusion from treatment. In parts of the US, triage may become grievously necessary, as pandemic peaks overwhelm resources. Setting proper criteria for such decision-making is crucial for avoiding injustice, guilt, and tragedy. Sorrowfully, a medical consensus on whom to exclude has been forming, in “guidelines” from universities and state commissions, that often works explicitly against the old, and implicitly against people with disabilities, people of color, poor people, and those who live in crowded nursing homes, who are over 75, or 60, or even over 40.  Bias in triage decisions is a danger to those whom society has made vulnerable.

“The transition from conventional to , , , crisis care comes with a concomitant increase in morbidity and mortality,” warns a document on “crisis standards of care” transmitted to the Trump Task Force on March 28. [i] This essay responds to recent arguments justifying crisis exclusions that are erroneous and, to my mind, unethical, but, because they are authoritatively presented or widely held, dangerous.

“One thing everyone agrees on is that the most morally defensible way to decide would be to ask the patients,” Dr. Wynia, a bioethicist, is quoted as saying in a survey of opinions reported by Sheri Fink for the New York Times. [ii]  This sounds plausible: In health, some people make living wills requesting that if unable to speak for themselves (because of e.g., severe cognitive impairment, coma), they be kept alive with “heroic” measures, or not. Consent is indeed necessary from Covid-19 patients who can speak for themselves, who are gasping and scared and might benefit from ICU or intubation if offered. Would such patients sign the same advance directive now? This is supposed to be a moment of choice, involving reassuring explanations from medical personnel about options (even induced coma).[iii]  A danger emerges: some candidates for scarce resources might eliminate (“sacrifice”) themselves.

Consider that internalization of inferiority is real and affects wide swaths of the population. As the feminist and disability rights movements have taught, many people feel they must be self-abnegating: Others' lives are worth more than theirs, Depressed people may agree to relinquish their chance—but many older people are depressed by the pandemic. We are told often that our lives are more at risk than the lives of others. Family members will be unavailable if we are hospitalized. And, because we are suddenly framed as less valuable by popular opinion and some medical guidelines, older and disabled people may feel expendable.

The elderly and disabled category has had pointed aggressive societal pressure aimed at them for a long time. Vehemently denied but still widely held, is the feeling that the older the patient, the more undeserving of treatment. “So close to death already.” The attitude spreads, first unconsciously and now explicitly, that younger adults are more valuable than older adults; the healthy more desirable than the less abled.

Ageism permeating the medical profession, a widespread problem, adds to triage confusion. Older people--not deaf and not cognitively impaired—complain in conventional situations that their doctors often ignore them, preferring to talk to their adult children. We are not seen. We may insultingly be considered “burdens”--too costly, too unproductive, too time-consuming.

Equal treatment, a constitutional right and an existential necessity, is likely to be ignored in the crisis situation. The University of Pittsburgh guidelines, a model, don’t mince words.  The tie-breaker should be age. (A tie means all patients with that score have an equal likelihood of survival.) These guidelines give priority to younger patients within these age groups: 12 to 40, 41 to 60, 61 to 75, over 75+.  (Massachusetts’ new guidelines are similar, as reported on April 13th.) The Pittsburgh document calls this “the life-cycle principle.” [iv] A principle! That sounds not just plausible but lofty. Less so if we call it “culling the old.” The United States has seen a growth of longevity that any nation could be proud of. Now their longevity may be used against people as young as forty.

With hostile ageism rampant, as we see, mere chronology counts more than an individual’s medical condition. An article in NEJM gives “priority to those who are worst off in the sense of being at risk of dying young and not having a full life.” [vi] The retired veteran New York philosopher, Andrew Wengraf, argues against the “full-life” argument.

Age may be a vivid sociological category, but to age is just to go on living. It is true that when Bertrand Russell died age 97 he was said to have had a fulfilled life, a life not free of disappointments but certainly fulfilled. . . . And inasmuch as life is finite, we are nearer death when we are old. But Russell was not obliged to die because of having enjoyed a long, rich life. The burden of proof is on anyone who thinks Russell has a duty to die prematurely. That person needs to explain how Russell could acquire that discriminatory outcome as an obligation. Without that, it cannot simply be imposed upon him in a triage queue.

New York state’s guidelines are not ageist; Governor Andrew Cuomo said categorically, “My mother is not expendable.” Justice in Aging, a San Francisco legal NGO that protects low-income older people, has co-written a letter to California health officials asking that treatment discussions “include an explicit prohibition on triage and triage guidance that consider an individual’s estimated remaining number of years of life and other factors that cannot realistically be operationalized without taking age into account.”[vii] The Johns Hopkins criteria for treatment, which rightly depended on public input, ask no more than one year of potential life, thus respecting people in their nineties. I have a dear aunt who is 99, healthy, practicing social isolation, not ready to die. At 79, I assert that my life is worth no more than that of my aunt, nor less than that of a 30-year-old.

Ethicists rightly omit most exclusion criteria (color, gender, low income). Future perceived value ought to be another no-no. Behind the mask, fortunately, a doctor cannot tell if that person with double pneumonia is Einstein or a homeless person of the same age. But age is as visible as gender and race. If we were to exclude people because of age, we would lose many of our current leaders. The UK would lose Queen Elizabeth. And some disabilities are clearly visible.

In a hospital crisis, ethical decision-making going case by case must fight every societal bias of long standing: refusing to weigh the life of a white person as worth more than that of a person of color, the life of a man more than a woman, a cis person over a trans person, an apparently able person over a person with an obvious disability, or a younger person over an older person. And what of an old black woman, or someone else whose visible intersectional category may activate prejudice? Ethical triage even in crisis care should focus on the individual’s medical condition, not the sociological category. Training for doctors and nurses must include not only clinical guidance, but situational awareness about potential bias.

Having to decide on triage occurs at many stages, from EMTs to the bedside. Excluding people or withdrawing treatment from some may feel tragic to doctors, as well as for the patients who die, and for their families. Where bias rules, however, triage becomes criminal. The government document to the Trump Task Force, wants all healthcare workers to have “adequate guidance and legal protections . . . from unwarranted liability” (p.4).

But even the best-designed bias training cannot prevent the appearance at these multiple decision points of many people suffering from long-term health inequalities based on gender, race, national origin, or immigrant status, and low income. For them discrimination starts in utero, with inadequate prenatal care. Early deficiencies may grow worse (toxic environments, substandard housing) throughout life, as sociologist Dale Dannefer has shown through his concept of cumulative disadvantage. [viii] Middle ageism—causing people to lose jobs early in life, preventing them from finding work again—leads to family dysfunction, foreclosure, diseases of stress. Inequality goes on so relentlessly that such people are inevitably at more risk if Covid-19 hits them. Injustice is clearly built into any crisis standard of care that prioritizes the likelihood of highest long-term survival, in a society that has lacked Medicare for All for the past sixty years.

The most just answer seems to be that all those with similar conditions and equal chances of one-year survival, participate in a lottery. A petition to this effect, addressed to the US Surgeon General, called “Just Rationing,” can be signed at  Change.org/JustRationing

The US government, burdened with racist, market-driven, small-government ideology, for decades denied the poor the right to health care and exacerbated inequality. Under Trump the government underfunded its public health service, disregarded science, procrastinated in preparations. The underfunding of nursing homes, the overwork and underpayment of staff, have already led to uncountable deaths. In many countries, the excess deaths of the pandemic will be the fault of the state. The deaths incurred thereby are crimes against humanity.

But suppose the curve flattens--we are spared triage! Eventually the data will tell us how many died after having suffered a life of disadvantages. What has been revealed already, however, through these calm, ostensibly reasonable, “ethical” medical guidelines, is a frightening explosion of explicit hate speech against people who are simply older. Older than the valued young. An entire nation has learned that this is normal and expectable. When pinch comes to shove, we alone have a duty to die, cursed by our date of birth. In the midst of grief, outrage.

[ii] Sheri Fink, “The Hardest Questions Doctors May Face: Who Will Be Saved? Who Won’t?
https://www.nytimes.com/2020/03/21/us/coronavirus-medical-rationing.html

[vi] “Fair Allocation of Scarce Medical Resources in the Time of Covid-19,” by Ezekiel J. Emanuel et al, NEJM  March 23, 2020. https://www.nejm.org/doi/full/10.1056/NEJMsb2005114?query=RP Dr.  Emanuel is the author of the notorious article in The Atlantic that said all people should voluntarily refuse medical care after age 75, and that he would do so.

[vii] Included in a bulletin from Justice in Aging, “Justice in Aging Statement on Discriminatory Denial of Care to Older Adults,” April 4, 2020. https://www.justiceinaging.org/wp-content/uploads/2020/04/Justice-in-Aging-Letter-to-Sec-Ghaly-Age-Discrimination-04032020.pdf?eType=EmailBlastContent&eId=6b1dca87-da64-475e-a2b6-31a27cd48e51

3 thoughts on “Avoiding Ageist Bias and Tragedy in Triage”