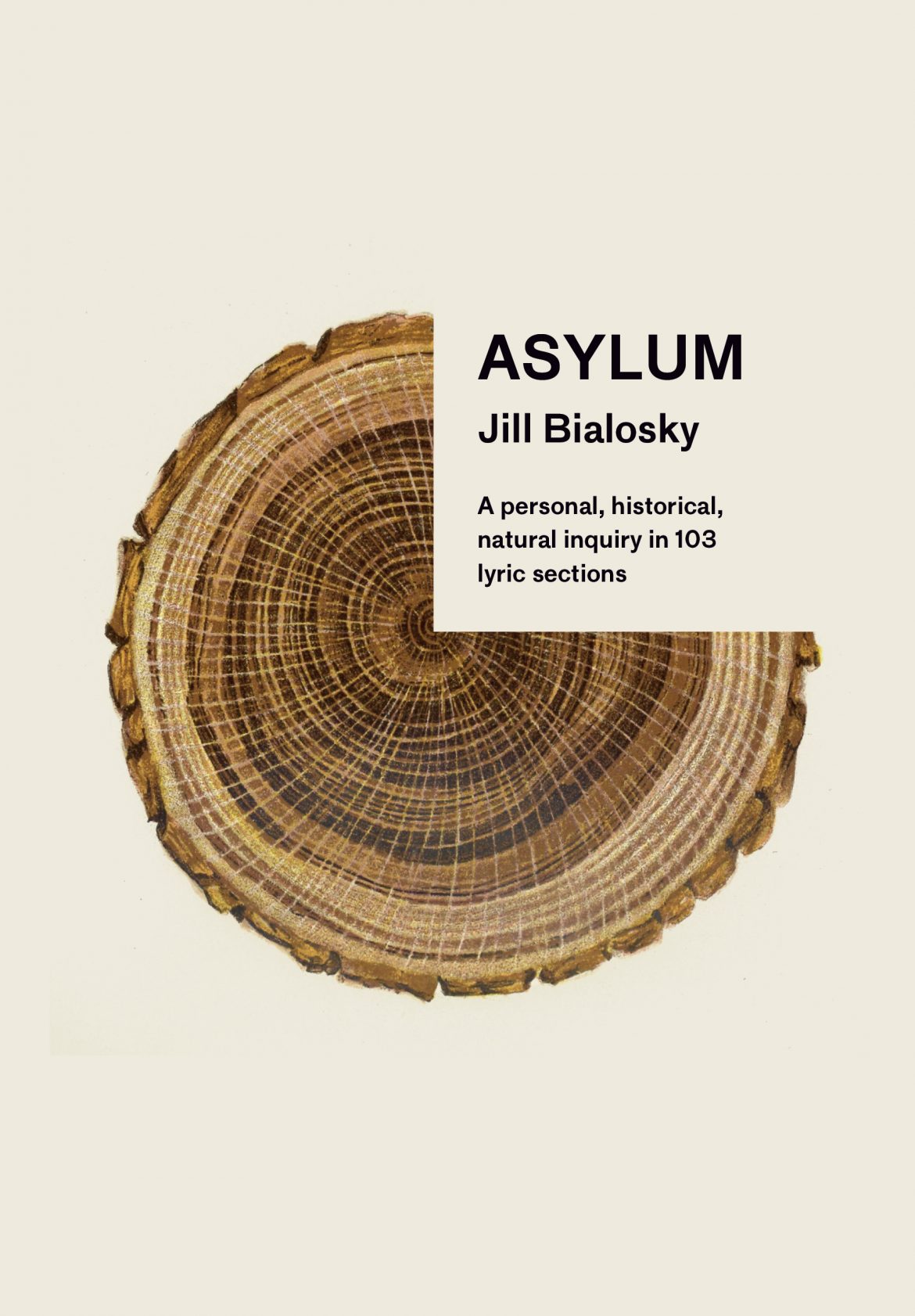 Asylum, Jill Bialosky’s fifth collection of poetry—her most ambitious work to date—demonstrates both searching consciousness about life and its meanings and a careful braiding of literary histories and contemporary influences into 103 lyric sections.

The nexus of inquiry and lyric are at the heart of Asylum. Inquiry unfolds through these poems as intellectual interest melded with open-hearted curiosity. Bialosky writes in the opening poem, “Prelude,” for example, “It was like the music of an afflicted bird,” where the song of the bird is altered through affliction morphing into “a fugue of death.” A few lines later, the sound “had entered your spirit & it was your own voice.” With this artful blending of the natural and human world, experienced through the sonic potentials, Bialosky delivers a revelation: sound from the afflicted bird is not the “fugue of death,” rather “the fugue of life.” This opening poem alerts readers to the demands and pleasures of the 103 lyrics that follow. With attention from both the mind and the heart to language’s sonorous resonances, transformation and reimagination are both at hand.

Lyric, brief, musical, linguistic encounters, is the primary mode of these poems, but narrative elements tug as well. Asylum alludes to biographic themes that Bialosky has explored in her prose, particularly History of a Suicide: My Sister’s Unfinished Life and Poetry Will Save Your Life. In these poems, Bialosky revisits these themes with fresh energy demonstrating their continued reverberations. In lyric XXXIII, Bialosky quotes a paper written by a high school student about her book about suicide, marking the way words travel. In lyric XXIV, the impulse to look for patterns, order, and aberrations is illuminated by this line: “Because we were seekers, because grief had transformed us.” Throughout these poems, revisiting experience, like rereading literature, offers the promise of insight. Revisiting, returning, rereading evoke narrative—and time—even as these poems insist on lyric. Bialosky revels in this contrapuntal nature of narrative and lyric. Grand literary narratives from Dante and Celan ground Asylum even as their entrance is oblique through section titles, epigraphs and elliptical references. Piecing together narrative from Dante or savoring meaning with Celan in the twentieth century delights the speaker in these poems. Bialosky rigorously grounds these poems in the literary traditions, handling the weight of these ur-narratives as architectural palimpsests chiseled until only the lyric moment remains. These strategies of leaning into lyricism through echoes, pastische, brief quotations, and ellipses build meaning and tension while resisting even challenging narrative.

Bialosky’s engagements with Celan in Asylum highlight her proficiency with these strategies. Two quotations from Celan form epigraphs for the entire collection, encounters with the spirit of the book before the poems even begin. Lyric LXXXVIII provides a succinct narrative for Celan. Here it is in its entirety:

Paul Celan, a Romanian-Jewish poet growing up in the shadow of the concentration camps, through the thousand darknesses of death-bringing speech, drowned himself in the Seine in 1970.

This narrative moment arrives in the final pages of the collection; it is almost jarring in its directness about the influences of the book, but a handful of pages later, lyric XCVIII delivers more elliptical words from Celan assembled by Bialosky:

Black milk of daybreak we…at night we drink…at morning and
midday we
…at evening, we…and we…

This lyrical sampling of Celan’s famous “Death Fugue” poem reveals the poet’s method. The influence of Celan from the opening pages to the final pages emerges as a watermark of the poet’s thought, as a smudged fingerprint in the assemblage of language reaching, striving, imagining meaning.

Celan as both watermark or fingerprint and lodestar in Asylum makes this book of keen interest to Jewish readers, and Bialosky weaves other Jewish influences, both religious and secular, throughout these lyrics. In lyric XIII, she echoes the high holidays liturgy, we “prayed for our names to be entered-- / those who will live & those destined / to the world to come.” A later lyric she composes exclusively from a Talmudic passage:

Religious and cultural aspects of Judaism enter these poems, but the most transcendent poems explore the ordinariness of Jewish people. In lyric IX, Bialosky confides,

I liked the order & monotony, because to want
was to tempt the gods, because modesty
was the equivalent of survival.

Situating survival with order, monotony, and modesty, Bialosky gestures to Celan and celebrates the ordinary while also recognizing how it contains despair. Lyric XI describes working at a restaurant in Iowa City and befriending “another waitress, blond & blue-eyed, / she grew up in one of the remote farms outside of town,” and the speaker confides, “I was the first Jew she’d ever met. / I caught her watching me sometimes.” Lyric XLV leaps across time from the Nile river “red with blood” to “camps in Nazi-occupied  / Eastern Europe” and then to contemporary college campuses with a Swastika painted “on the door of a dorm room” and “carved into the purity of white fallen snow.” In these lines, Bialosky explores how encounters between Jews and non-Jews can be both curious and uncomfortable and resonate with fear, hatred and trepidation, in the past—and today.

Always Bialosky resists easy presentations. Complexity expressed through rich layers whittled back to the elemental, the momentary, the lyric is Bialosky’s mode. Infused in the poems of Asylum are religious and cultural ideas about Jews and Jewish communities combined with contemporary experiences of Jewishness as a mishmash from other traditions. Yoga enters as a metaphor for struggle; asanas form another symbolic language informing the collection. Similarly, contemporary civil rights and social justice struggles provide vital ballast for the collection making it feel both historically grounded and fresh and of the moment. Together, evocative, symbolic language in these lyrics map psychological, psychic, and literal spaces, as a strategy for understanding, compassion, and reconciliation. An early lyric, XII, concludes:

The multivalent word of the title, Asylum, further illuminates the complexity of these poems and the poet’s intention. Asylum is many things: a safe space that one country can offer a group of people who have been expelled as well as a space where we send people whose problems are too great to bear for families, for people around them, for communities. Asylum is both a comfort and a space to be feared. In Lyric XX, Bialosky writes:

for that time there was a brief sojourn
from the asylum in which the poem was held prisoner, asylum for which

In this configuration, asylum is neither the space to seek nor the space to avoid. It is the space that is. We can choose, as Bialosky tells us in the prelude, to understand it—asylum, life, the conditions of the moment—as a death fugue or a life fugue. Asylum is a dense, rich, and deep collection. Bialosky’s project in her previous book Poetry Will Save your Life gestured to an accessible world of poetry where great poems take hold of us to shake us and save us. That is true, but Asylum invites readers to poetry with new challenges. In Asylum, beauty emerges from the lyricism and elliptical gestures of poetry; meaning—and even salvation—are both apparent and just beyond reach, an apt metaphor for life, contradictory, disjoined, complex: an asylum cell.