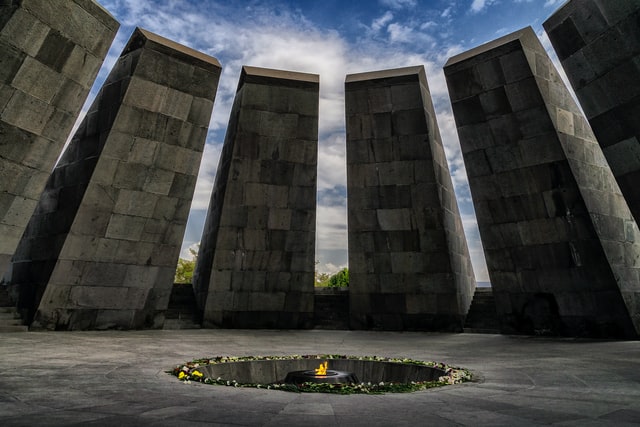 Photo by Amir Kh on Unsplash

In 2019, the U.S. government passed legislation that formally recognized the Armenian Genocide, the extermination of 1.5 million Armenians by the Ottoman Turks from 1915-1923. Now just a year later, world leaders, including the executive branch of the U.S. government, are allowing the escalation of Azerbaijan’s attacks in the Caucasus region and the consequent threat of a second Armenian genocide to occur with little involvement. Have we not learned from what history has shown us?

Since September 27th, the tensions and fighting in the Nagorno-Karabakh region have quickly escalated with no end in sight. Turkey has been pushing Azerbaijan into a war with Armenia to strengthen its own position and power.  With the world currently concentrating on other events, Turkey has taken this opportunity to seize what does not belong to them.  Since June, Turkey has provided training to the Azeri military with combined drill exercises and sold arms including ammunition, missiles, electronic warfare systems, and vehicles to Azerbaijan.  Turkey also publicly stated that it would provide support to Azerbaijan in its fight against Armenia. [1]

The Turkish government is encouraging militia fighters from the region to join the ranks of the Azeri military by offering incentives to these fighters and by labeling this war as a jihad. Armenian Christians are fearful that they will be exterminated for their Christian beliefs. This is a war over territory, yes, but the conflict arises fundamentally from a desire to exterminate the Christian religion from the region. Turkey has already shown its true colors in the region with its attempt to exterminate the Kurdish population in Iraq. My biggest fear is that my homeland of Armenia will cease to exist for future generations as the world watches its destruction with no intervention.

The Azeri government is being controlled and manipulated by the Turkish government to allow Turkey to achieve its end goal:  The Second Ottoman Empire. As Nikol Pashinyan, the Prime Minister of Armenia, has stated, “The Armenians in the South Caucasus are the last impediment on Turkey’s way to expanding its imperial policy. We must look at it in the context of the general policy pursued by Turkey in the Mediterranean region. This policy implies use of terrorists and mercenaries. The international community, especially Europe, must take this fact very seriously. If Europe fails to do so, you will have to meet Turkey in Vienna.[2]”

Since September 27th, I have personally been affected by the atrocities of the ongoing violence in the region.  An organization I founded in 2003, the Children of Armenia Fund, has seen young people we have educated through our SMART Centers drafted into the military to fight. Ten young men from COAF-sponsored villages, whom I've known since they were young children, have perished protecting their homeland in the past two weeks.

This 60 second video exemplifies the unfolding human rights crisis in Armenia and Artsakh, which is rapidly amounting to a genocide with the use of modern warfare weaponry. The Turkish and Azeri governments are on a campaign to remove and exterminate the peaceful people of Artsakh, who have been living on these ancestral lands for 2,700 years. This is a clear attempt by the Turkish government to initiate a second Armenian genocide.

Although I am not on the ground to witness first-hand the horrific damage this war is causing, I hear daily the concern in the voices of my friends over the increasing insecurity in the region. It is always those that are less fortunate that are most impacted by war. The military death toll since September 27th has reached over 700 and that number does not include the civilian casualties.[3] The unprovoked attacks from Azerbaijan and Turkey have become increasingly more violent, already causing nearly 100,000 women and children to be displaced from their homes.

My plea is that we do not merely watch an entire ethnic group be destroyed but act to bring lasting peace to the region. World leaders need to intervene to stop Turkey from instigating and interfering in geopolitics in the region and if they neglect to do so they should understand that the continued bloodshed will be on their hands.

[2] Spiegel, Germain Der. Nikol Pashinyan: “Azerbaijan has no longer control of its destiny; Turkey is the decision-maker in Azerbaijani.  10 August 2020.  https://www.primeminister.am/en/interviews-and-press-conferences/item/2020/10/08/Nikol-Pashinyan-interview-Spiegel/.

Dr. Garo Armen was born in Istanbul, Turkey of Armenian descent and has lived most of his life in New York. Dr. Armen is the CEO of Agenus, an immuno-oncology company with a pipeline designed to activate immune response to cancer. He is also the founder of the Children of Armenia Fund (COAF), established after his first visit to Armenia’s rural villages in 2003. COAF was founded to provide children, youth, and their families with the opportunities and resources to realize their potential and achieve their own unique greatness despite having endured so many challenges over the last 100 years.