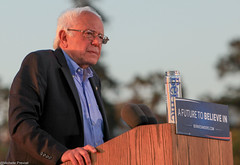 Two very important articles appeared last week, one by U.S. Senator and Presidential Candidate Bernie Sanders and another by a college student, sharing his experiences on campus.

Bernie Sanders took a clear and unequivocal stance insisting that “Fighting antisemitism is at the heart of the left’s struggle against oppression.” Sanders unequivocally states that criticism of Israel’s policies and treatment of Palestinians is not anti-Semitism just as criticism of the policies of the U.S. government does not make someone “anti-American.” It is a powerful yet compassionate statement that England’s Labor Party leader Jeremy Corbyn ought to embrace in the face of growing concern just before the UK’s December election that the Labor Party is not willing to be as unequivocal as Sanders on anti-Semitism. We hope to see more progressives taking this stand in their public talks, explaining precisely why fighting anti-Semitism is at the heart of the left’s struggle against oppression. When we at Tikkun have made this point, we’ve often been dismissed as “Zionist” and therefore, in the eyes of increasing numbers of younger progressives, illegitimate. Tikkun has never described itself as a Zionist magazine, but just as we’ve expressed compassion toward the Palestinian people and support for their emancipation from Israeli oppression, so we have also expressed compassion for the Jewish people who, climbing out of the gas-chambers and crematoria of Europe, embraced in1948 (3 years after the Holocaust ended) the idea of a Jewish state as the necessity to feel safe in a world that had listened mostly with indifference to the Jewish people’s cry for help as one out of three of the Jews alive in 1940 were murdered by 1945. It seems both outrageous and the height of arrogance for some to now claim that that state has no right to exist, while not insistently making the same claim about countries whose sins have been far greater (e.g., China, Russia, Saudi Arabia, Turkey, the U.S., Iran, North Korea, Syria, Egypt, and the list goes on and on). At the same time we do not see Israel as a “Jewish state” but rather as a state with lots of Jews, because Israel’s actual behavior in the past several decades has consistently violated the most frequently repeated command of the Torah: “thou shalt love the stranger/other/geyr.”

Blake Flayton, a sophomore at George Washington University who describes himself as “a young, gay, left-wing Jew,” shows that while vigorous critique of Israeli policies and behavior is not automatically anti-Semitic, a growing section of progressives are in fact legitimating anti-Semitic tropes. Writing in the New York Times November 15, 2019, Flayton presents his own experience, mirrored by that of many others, in which Israel is treated as the worst enemy of human liberation and central ally of global imperialism.

Tikkun’s insistence that both Israel and Palestine have legitimate stories and that both have acted in immoral and provocative ways (though obviously Israel has far greater power now than the Palestinians and hence greater responsibility to end the conflict which it could do with generosity and caring) has been dismissed by left-wing activists as too friendly to Israel. Over the years we have heard dozens of stories of progressive Jews being dissed or even excluded from progressive movements or prevented from speaking at public marches or left-wing events unless they were willing to join in extremist anti-Israel rhetoric.

In his article, Blake Flayton makes a strong case for the notion that while not all criticism of Israel is anti-Semitic, a growing tendency in left-wing circles is moving beyond criticism of Israeli policies into overt anti-Semitism. Unfortunately, Flayton’s impact is weakened by his failure to fully acknowledge the ethically outrageous behavior of Israelis toward Palestinians, and increasingly also toward non-Jewish immigrants.

Flayton seems unaware of the conditions of Palestinians living in the West Bank who do, in fact, live in apartheid-like conditions while their land is slowly being colonized by Jewish religious settlers. After the Knesset passed a resolution in 2018 declaring that Israel was a state for Jews, rather than a state equally committed to the well-being of all its citizens of any religious or ethnic identity, we recognize how this kind of blind arrogant nationalist chauvinism has contributed to left-wing anti-Semitism. Read the reports of the Israeli human rights organization B’tselem or the daily reporting on Israeli politics by Ha’aretz, the Israeli version of the New York Times, to understand the outrage toward the Israeli government.

Flayton also seems unaware of Tikkun, IfNotNow, or T’ruah outspoken against the Occupation and Israeli racist and ultra-nationalist policies yet continue to show compassion toward the Jewish people. Yet it is understandable why many young people don’t hear these voices, because the Jewish establishment marginalizes them rather than treating them as an honored part of the Jewish people deserving of respect and financial support. It is that Jewish establishment that deserves an important of the blame for the growth of anti-Semitism by consistently equating criticism of Israel with hatred of Jews. I personally faced this most recently when those seeking venues for me to talk about my new book Revolutionary Love (which does not address the Israel/Palestine conflict) get rejections from synagogues and campus-based Hillels that mention Tikkun’s critique of Israel as the reason they won’t let me speak about my book on American politics.

For more on this topic, please read my book The Socialism of Fools—Anti-Semitism on the Left, and my book Embracing Israel/Palestine.