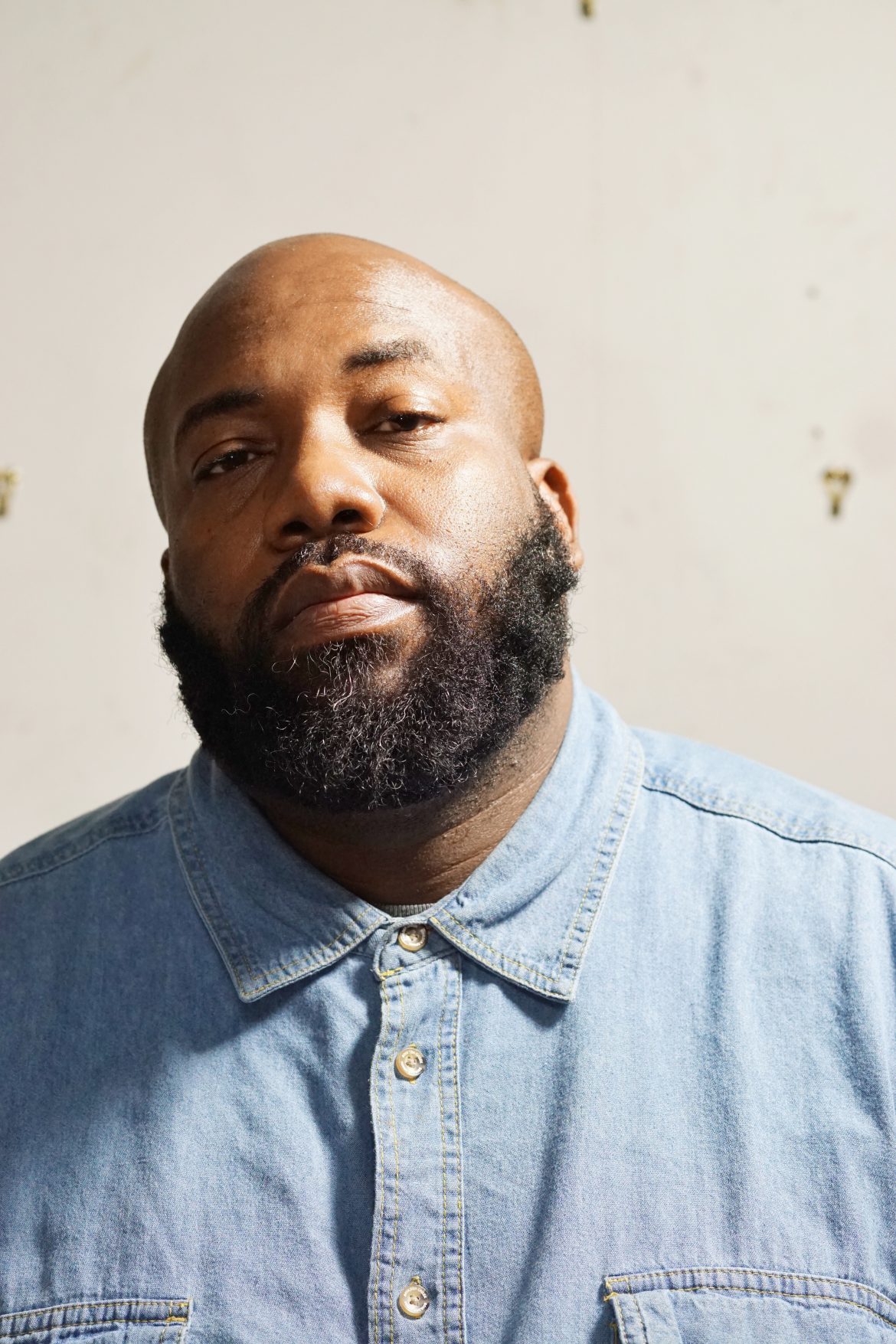 Alfred Conteh’s focus as a painter is on communicating the hard truth of what it means to be a Black American right now. He doesn’t want you to call his paintings beautiful. He wants you to see their ugliness, and acknowledge it, because that’s the reality of the people he paints—the folks who live in and around the West End neighborhood of Atlanta, Georgia.

Being a realistic painter means making recognizable pictures of the world. Painting reality means also making visible the invisible: revealing what makes us what we are, and what stops us from becoming what we long to be.

Conteh’s painting Quan’ta II (2019) shows a young, Black man, tattooed, and gaunt in the cheeks. The painting looks as though it has been pulled from a fire, its surface coated in melted urethane plastic and paint mixed with atomized metal dust, soil, and battery acid. The figure’s face is subsumed within a radioactive, pink haze.

“I remembered how when I first painted this man back in 2016, he was going through some things in regards to aspirations he had,” Conteh explains, “trying to get into the music game, dealing with some issues with the law. Meeting back up with the brother now, he’s still dealing with the same things.”

Quan’ta II conveys Conteh’s understanding of what this particular human being is facing. 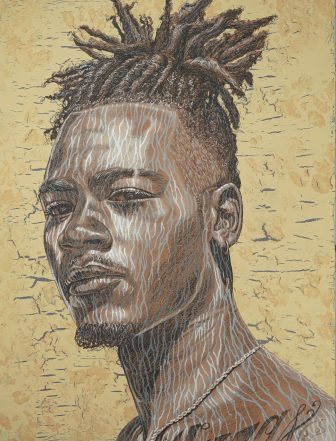 “I scratched his eyes out,” Conteh says. “Maybe he isn’t seeing. There’s an obscuring of his past for him to be going in this same loop, external factors creating the blindness, moving around in the dark, creating this lack of vision, creating a system where he’s going back to the same things, trying to get somewhere without progress.”

Jade (2020) shows a young lady, painted red, holding a black dollar bill. Her arm is partially eaten away by her toxic green surroundings.

“This woman’s name is actually Jade,” Conteh says, “but it’s also a play on words, like jade green. It’s an allegory about Black economics. Red, black and green represents the African diaspora, the African flag: the red blood of the people; black for the nation itself; green for the land. But here, it’s an acid green separating the hand holding the dollar from the rest of the body. The dollar bill is painted black, representing Black money, and how the body politic, through public policy and politics and societal design, separates Black folks from wealth. The figure is dressed in winter clothes. It was cold outside when I painted her. It’s cold out here for us.”

These paintings debuted this summer in Our Reality, Conteh’s inaugural solo exhibition at Kavi Gupta Gallery in Chicago. Due to the COVID-19 Pandemic, the exhibition only opened online. The images are still striking, but digital viewers lose out on the essential physicality of Conteh’s works: the material presence that communicates Conteh’s message, that Black America is literally rusting away. 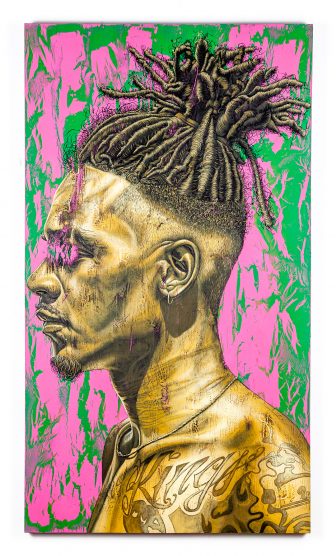 “The decadent veil affects how we see the reality of this country. It affects how we vote, and how things are socially engineered,” Conteh says. “The way it plays out, it creates apathy where there should be a true indictment of how these systems work. I’m not big on celebrity. I’m not big on symbolism. Yeah, we had a Black President, so people think that equates to success, or parity in the workplace, or education. This speaks directly to how this country functions. People like happy stuff. But for every LeBron James, every Denzel Washington, every elected official or judge, there are 39 million Black people whose lives are not like that, who don’t have that type of access or the special currency those people were given.”

“I’m the party pooper, man. I’m the guy people don’t like having conversations with. I suck all the air out of the room. I don’t mince my words when it comes to the realities of this country. I talk about data. I talk about Black folks eating failure every day. The rest of the country is doing well, and that success is baked in with them not being Black. When you’re Black you have to eat the scraps of every facet of life. But people Black and white in this country have this cognitive dissonance that it’s not true.”

Though they might avoid Conteh’s social critiques at parties, people gravitate towards the visceral reactions his paintings inspire. It’s unsettling to Conteh, however, how many viewers respond by calling his paintings beautiful.

“When you see my work, you see cracked surfaces, weathered paint, things left to ruin,” Conteh explains. “Where Black folks are existing, the neighborhoods and communities, there is disrepair. It’s crazy to me when people say they like things that are weathered. More often than not, folks who say that have the opportunity or privilege of having newness around them. They have the financial systems to be exposed to so much, so they like things that are distressed, like distressed jeans, or when it comes to décor, old country stuff. It looks old, but its high-end materials, like torn-up, ripped jackets, like old cars.”

Conteh is not making paintings that “look” distressed. He is painting distress.

“When I paint these things, that’s the reality of a people,” he explains. “When you see tearing, erosion, cracking, that is something that’s been left out and exposed, discarded. The atomized steel dust, the bronze, the brasses: I’m thinking of the hardware in the apartment buildings, the bus stops, the kiosks at the train stations. The only beauty that I see in it is that folks are still here despite those circumstances. If you go to another side of town, somebody cleans those up and paints them periodically. If you’re over here in the West End, anywhere where Black folks are impoverished, ain’t nobody cutting the grass, scrubbing off the old paint and repainting stuff. The tax base ain’t over here, so we ain’t gonna re-do any of this. That’s the type of story I’m telling in this work, through the materials.” 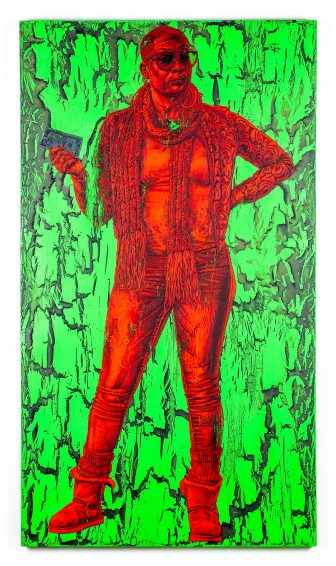 About the burnt, urethane plastic Conteh recently started using on his paintings, he says, “I’m showing when places get burned out, how you just paint over it and live around it. I’m tearing, boring through the canvases. That’s where I’m at right now. There’s a myriad of things I’m doing to show the materiality, and to marry the image with the meaning.”

Conteh recalls one painting he made where he treated the surface like black mold. “This person went on and on about how beautiful it looked. I was like, ‘What’s beautiful about living around mildew and mold? You’re not putting two and two together.’ When you see mold, you ain’t supposed to be around it. There are folks who can’t get away from it, when it comes to their apartment, or their kids’ schools.”

Conteh remembers the multitude of Black people who fled New Orleans after Katrina, and the mold and mildew that overtook their former homes.

“I hate to say refugee, because hell, we’re all Americans, but after Katrina, they were refugees in their own country,” Conteh says. “And it’s not only them. Unfortunately, being Black in this country there is a shared experience that transcends time, that transcends place, that descendants of slaves all share. No matter where in the country you are, you are American in name, and only in name. We’re overlooked. The greatest country in the world, the wealthiest country in the West, but the people who built it are the poorest people in the country. That’s the story of us, of America.”

Viewers also frequently remark about the fashion in Conteh’s paintings, pointing out a pair of hard-to-find Air Jordans, or a piece of jewelry worn by someone in his paintings, they assume it’s a brand statement.

“When I have shoes in a piece, it’s because yeah, this is what people are wearing. But it’s not just fashion, its economic,” Conteh explains. “You might have on a pair of Jordans or Ballys even though you’re poor. You’ve been socially engineered to be a consumer. It’s a direct connection to the decadent veil of consumerism. People who don’t have money spend anyway. You are disenfranchised. You can’t buy a house. You can’t start a business. You can’t create wealth. You don’t have access to it, or the social currency to get it. What you can do is you can show you have something, a piece of the American dream. You can show it in shoes. Consumerism is a very American thing—as American as apple pie.” 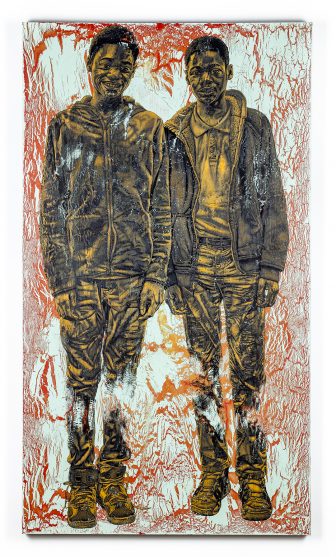 Conteh’s wish is that people would understand that these are not just paintings—they’re reminders.

“They should remind everyone who looks at them that this is the reality of Black folks in this country right now, specifically the Black folks whose shared experience is as the descendants of slaves,” Conteh says. “Everybody who lives here as Americans should be reminded there is a group of people who are American in name, but who are not American in practice. If you have this painting on your wall, you should ask yourself, ‘What should I do to make these folks American just like me? What should I do to make these folks who built this country American just like me so they have the same rights, privileges and protections as me.’ You have to say, ‘If we’re going to talk about equality in this country, let it start with me.’"