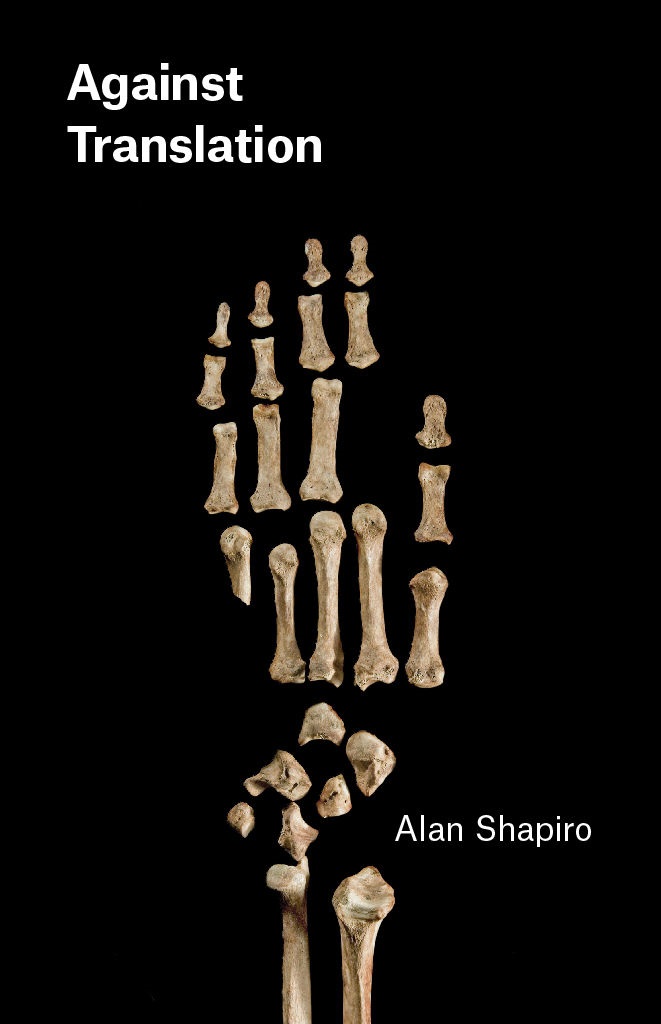 Image is courtesy of Chicago

Against Translation by Alan Shapiro

[Editor’s note: Alan Shapiro is one of the great and brilliant poets of our time, and he has published many of his poems in Tikkun. Emily Banks captures below some of what makes Shapiro so resonant to this historical moment. —rabbilerner.tikkun@gmail.com ]

What do we ask of poetry in the era of fake news and instantly-shared memes? The virtuosic poems in Alan Shapiro’s latest collection offer a needed reprieve from the quickly-replicated quips we’re all so inundated with, taking seriously our longing for genuine communication even as they lay bare its impossibility. At a time when we are confronted by so much difference between ourselves and others, Shapiro’s Against Translation brings its readers to the limits of understanding and urges us to linger there. As catastrophic disaster feels, for many of us, increasingly close to home, Shapiro captures both the intimate effects of geopolitics and the tragic remoteness of intimate relations. Even as he stages the small-scale tragedies of our dividedness, poem by poem Shapiro also shows us why we must keep trying to see each other sympathetically. If the book has an ethics, this is it: regarding others, we must extend ourselves past the limits of our current comprehension. Against Translation’s tragedy is the impossibility of ever fully succeeding, but there’s a hopefulness in its imperative to keep trying. These poems have all of Shapiro’s characteristic wit—his ability to make you chuckle while exposing the saddest realities of existence—but they feel freshly urgent in their call for radical compassion in the worst of times. Guided by a keen observational eye for moments of interaction not unlike C.K. Williams’, this collection is relentlessly honest and raw without sacrificing lyrical elegance.

Language can dissolve or exaggerate difference in Shapiro’s rendering, and the poems in this collection ambitiously traverse that tension. Even when they shake us, as they often do, with the cutting precision of their sadness, their attempts at resolution provide some solace. While its themes are universal, Against Translation exhibits a distinctly American ethos. It grapples with national identity in poems like “Manhood,” which showcases language’s power to build communities, but also to enforce harmful social pressures. Shapiro recounts the intimate memory of watching his son ride an outgrown tricycle in the midst of a pivotal historical moment, writing, “9/11 had just become itself. A new and heady unironic language you couldn’t speak without and still be heard had overnight become our lingua franca, an Esperanto we woke up knowing.” This common language eclipses individuality with its oppressive sameness, which is repeated in their neighbor’s jovial interjection, “‘Big boy like you shouldn’t ride a girl’s bike.’” The boy, confused and shamed, pedals off a disciplined subject, now performing the brand of working-class American masculinity suggested by their neighbor’s insult; Shapiro tells him, “you were just like us now, not smiling, not laughing, serious and dutiful: you too had a job to do, so you did it.” Far from enabling understanding, here, the common language of the All-American “Vietnam vet, business school professor, church deacon, town council member” flattens difference in a painful coming-of-age ceremony.

“Manhood” feels like a snapshot or a single video frame of our national story, a moment to encapsulate the generationally-defining aftermath of the September 11th attacks. The poem’s prose form, to which Shapiro returns frequently in this collection, evokes a sense of condensed history. Tying historical and private memories together in an unbroken stanza, he recreates the shock of living through something we couldn’t yet fathom, “the way the plane-less silence in the skies that week surprised us all.” Its second person address includes the reader so that, as Shapiro reminds his son of a personal origin story, he tells us something about our collective history as well. This brief glimpse at America’s recent past resonates eerily today as it marks the early moments of the resurgence of tribal sameness currently playing out in the Trump era’s neo-fascist rhetoric. While the longing for a shared identity in times of crisis is natural, Shapiro stresses the harm community-enforced conformity causes, even in a flippant joke.

In “Bystander,” Shapiro counters the kind of empty Esperanto “Manhood” reflects upon as he dramatizes the all-too-familiar sensation of hopeless bewilderment upon reading the news. Reacting to a quotation from a USA Today article, “I saw a man put together what was left of his son in a bag,” the spear of this poem seeks the words to comprehend an unfathomable tragedy so plainly told. Unlike the rhetoric of unifying patriotism, this phrase highlights language’s inability to transfer experience. Mitigated through the screen and second-hand observation, the image becomes illegible, a “sound of speaking dis-intoned, devocalized, and thus unable of-his-son to make its speaking in-a-bag heard or known.” The poem considers what we cannot know, inquiring “if the bag was plastic, clear, and ziplocked” and “what parts were those and how in the bag exactly were they put together, or does put-together just mean dumped higgledy-piggledy into the bag, jumbled by the bag into a heap?” Its short paragraphs (which create the effect of stanzas in prose) trace its speaker’s quest to find the human in what is intended to be objective reporting, the way we all feel when we read the news these days. As the quoted voice moves “out of the words it spoke through into the empty screen,” Shapiro highlights the difficulty of empathy on a global scale, the impossibility of feeling with another person from whom we are separated by layers of translation.

The problem of empathy—that we are inextricably connected, yet incapable of knowing each other completely—is palpable in the collection’s poems on familial illness and loss, a topic common to Shapiro’s work and one he never fails to imbue with new insight. In “Hands,” he considers the relationship between his dying parents who have spent “sixty three years—chewing the dry, unleavened bread of better and worse.” His father looks at his mother “as the blind do, at and not at her, through her to nothing he could see,” and his blindness becomes a metaphor for the difficulty of seeing another person, even after years of constant companionship. The poignant moment of recognition when she begins weeping and, “He put his hands on her hands, and the Parkinson’s tremor in his hands made it seem as if his hands too were weeping for the hands they cupped,” cannot relieve the weight of their difficult years, but opens the possibility of communication as they sit, “telling each other how they were, what had hurt them in the days and weeks they weren’t together, and what was hurting now.” Their sharing is heartbreaking in its simplicity and the years of unspoken pain it implies, but suggests the power of compassion—the fellow feeling of trembling hands—to arise from hopelessness.

The tender culminating moment of “Hands” is devastating; it comes too late to undo the pain the speaker’s parents have hidden from and caused each other throughout the years. The same belated compassion underlies Shapiro’s poems about romantic love, as he narrates the accumulation of distance that leads to irreversible separation. “Countdown,” the poem that has stuck with me most since my first reading, expresses perfectly the regret of a severed connection and the retrospective ability to empathize with the estranged beloved after the chance of reconciliation has passed. The poem’s speaker hears, in his wife’s habit of playing solitaire in bed, an “accusation because I could / sleep, because I couldn’t or didn’t find a way to release you / from restlessness, or from me, or our day-to-day / sleepwalk through a life.” In this portrayal of solitude in intimacy, a couple is bound together by dissatisfaction, irrevocably linked by their inability to connect. The poem ends with a memory of physical touch, a breaching of distance which nonetheless fails to bridge the gap between individuals:

“remembering what I pretended not to notice then, how
when the phone shut off your foot would brush mine lightly
for a moment, sliding up and down the inside of the arch as if to feel
for something, expecting something, before it slid off and you
rolled away.”

The “something” remains undefined, representing what can never be shared. In this negation, though, is an acknowledgment. By memorializing the unsaid, Shapiro points to the incomprehensible as a defining element of love. Paradoxically, he suggests, our incomplete knowledge of each other and ourselves may be the driving force of empathy.

In our frantic political moment, Shapiro’s voice is refreshingly quiet. His attention to the 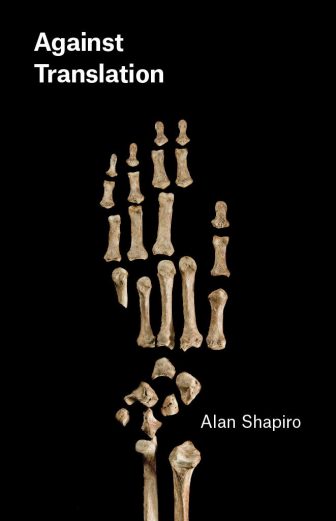 Image is courtesy of Chicago

Against Translation by Alan Shapiro

technicalities of prosody recall John Keats (whom he invokes directly) or James Wright and, with his renowned craftsmanship, the poems in this collection don’t appear urgent in the way more obvious “political poetry” might. But this is part of the point. An antidote to the oversimplified rhetoric of clickbait that fills our collective consciousness on a daily basis, Shapiro’s poems urge us to slow down and ponder the nuances of relations, both geopolitical and interpersonal, that have coalesced into a cultural crisis. Language can’t eliminate difference, nor should it, and it will never allow us to understand each other perfectly. But the work of it is, Shapiro insists, always worthwhile. Against Translation is driven by the ethical imperative to look at those different from us as closely—and as empathetically—as humanly possible. In its final poem, “Diaries,” the poet’s discovery of his daughter’s first diary entry scribbled in his own abandoned diary reemphasizes the inevitable overlapping of lives, the marks we may not realize we’re leaving on each other’s stories. Although we may never succeed in translating another person’s thoughts into our own language, Against Translation is a model for dwelling in the unknowable space of compassion.

Emily Banks is the author of Mother Water (Lynx House Press, 2020). Her poems and essays have appeared or are forthcoming in Heavy Feather Review, 32 Poems, The Rumpus, New South, Cortland Review, Superstition Review, and other journals. She received her MFA from the University of Maryland and currently lives in Atlanta, where she is a doctoral candidate at Emory University.