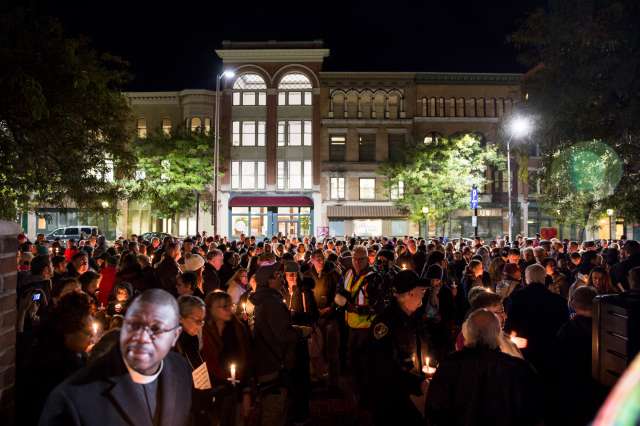 [Editor’s Note: Beyt Tikkun synagogue-without-walls is calling on Jews and our non-Jewish allies to take an act of solidarity with the murdered Jews, their families, and all those who have been troubled and scared by the massacre of 11 Jews in Pittsburgh. Remembering the way that the Danish people during the second world war took an act of solidarity by wearing a yellow star to be in solidarity with Jews who were being rounded up by the Nazis to be sent to death camps, we are suggesting that all those non-Jews AND Jews put on a kippah/yarmulke (or some other form of head covering) for the 30 days of mourning, which would end at dark on November 22nd (which happens to be Thanksgiving, a good day to have that attire on as a way of raising the issue of what needs to happen to challenge anti-Semitism and all other forms of hate, particularly against African Americans, Latinos, Native Americans, gays and lesbians, and immigrants). Of course, people will ask you why you are doing that, and you can then tell them about your opposition to anti-Semitism and every other form of “othering.”  If you are interested in doing this and want something to read on Thanksgiving to explain to others why you are doing this, send that request to chris.tikkun@gmail.com.  A kippah/yarmulke is worn by religious Jews (according to one tradition) as a symbol of humility, as though signaling that our ego ends right here at the top of our heads, and doesn’t extend further into the world. Think of it also as an anti-Trump arrogance and narcissistic grandeur. Of course, please also act now to get everyone you know to vote, as Rabbi Waskow wisely suggests at the end of his moving article below! ]

There are at least three concentric circles of grief and healing that are called forth by the murderous massacre at Tree of Life synagogue in Pittsburgh.

There is the immediate personal disaster of eleven lives destroyed, others wounded, families and friends bereft, a neighborhood traumatized.  To all these, we owe and we send blessings of swift refuah (healing) for the wounded,  deep respect and grief for the dead, and loving care for those bereaved.

There is the broader disaster of shock to the American Jewish community, until now so profoundly joyful to have found full acceptance in America these last several generations, after millennia of persecution elsewhere and elsewhen.

And from Pittsburgh we face again, this time etched in blood, the even broader disaster of an American government and parts of American society that our immigrant forebears who came here for freedom’s sake could not have fathomed

Less comfort as critics than as powerful, of course – but comfortable that all the clauses of the First Amendment affirmed our worth as Jews, as sacred fringes on conventional assumptions, as challengers who could wrestle not only with God (as our name “Yisrael” describes us) but with the rigidified habits of ourselves and others.

The Pittsburgh murderer attacked Jews because we were acting upon Torah’s teachings, welcoming refugees fleeing from oppression. (See Deut. 23:15-16).   So — in the wake of Pittsburgh, shall we protect ourselves by abandoning our commitment to compassion? Shall we hide from others who we are, by hiding from ourselves who we are?

That would mean hiding  from Moses and Miriam, from Amos and Jeremiah and Isaiah, from the unknown woman who first sang the Song of Songs, from Hillel and Akiba and Bruriah, from Rabbi David Einhorn of Baltimore who in the 1850s was forced by his own congregants to leave the city when he called for the abolition of slavery, from Clara Lemlich who rose unknown from a crowd of women workers to call for the great shirtwaist factory strike of 1909, from Rose Schneiderman who said only a working-class arising could prevent future Triangle Shirtwaist fires, from Martin Buber and Henrietta Szold, from Heschel and Vorspan and Kaplan, from Muriel Rukeyser and Alan Ginsberg and Leonard Cohen, from Judith Plaskow and Zalman Schachter-Shalomi.

That would mean hiding ourselves from the Burning Bush and YHWH, the Breath of Life.

Or we can choose to be who we are, choosing to join others on the fringes of American society – along with bold Black America, brown-skinned Americans and Mexicans, Native Americans,  refugees and immigrants, independent-minded women, transgender and non-binary people along with all the GLBTQ communities.

And remembering that in our tradition, it is Fringes that make the garment holy.

Why do fringes make the garment holy? Because fringes are threads of connection between our inward selves and the world beyond –reminding us that we end not with a sharp edge, a fence or a wall, but with a fuzzy mixture of “my” cloth and God’s air.

All the communities that live on the fringes of “America” connect us with the “Other,” the Beyond. Cut us off, and America will die of strangulation.

And from Pittsburgh we face again the broader disaster of an American government that our immigrant forebears who came here for freedom’s sake could not have fathomed:

A government honeycombed with white supremacism, moving into neo-fascism,  calling forth from the shadows into boastful visibility those who concoct bombs to enforce their racism, who can openly revel in their contempt for women, who can turn hatred of foreigners into willingness to rip babies from their mothers’ breasts,  who can turn their greed for hyperwealth into willingness to torch the Earth that is our common home, our only home  — and who can turn their latent anti-Semitism into mass murder.

How do we respond to these layered levels of disaster?

Sing along with Holly Near, “It could have been me but instead it was you”:

There is a time to VOTE.

Yes, we still have time – but not very much – to change this government controlled by hate-mongers and their toadies.

Already millions have been casting early votes. Six days from today, the Congress will be reshaped – or not. Or partly.

Either for the first time this corruptly rotten government will face a check upon its power – or its power will be authorized, unchecked.

Either we prepare for more tears as our government encourages more bombers, more bullies, more killers –OR we change our government, by voting in great numbers:

We have but six days to Grow the Vote – Grow it numerically, and Grow it in wisdom.

Long ago, the story tells us, at the edge of the Red Sea, the People paused in terror of the choices that they faced. Moses lifted his staff and prayed to God, the Breath of Life.

And God said, “Moses! My people are caught between Pharaoh’s Army behind and the tumultuous Sea ahead – and you stand there, piling prayer on prayer?  Tell My People to move forward!”

The People moved — became truly a movement into freedom. The future opened, and the Breath of Life became a Hurricane of Change.

So may it be for us.

Four months ago, The Shalom Center began preparing teachings and symbols for “Share Sukkot: Grow the Vote!” We bumped into several unexpected  concerns: “As a nonprofit, we can’t do that.” (Yes we can, as long as we don’t name a specific candidate or party to support.) “There’s a wide spectrum in our congregation; some people might get mad.” (Maybe the agreement is broader after Pittsburgh. And who can oppose encouraging people to vote?)  “Blacks and Hispanics may have a stake in this election, but we don’t. We’re fine, regardless.” (Gulp. Yeah, right.)

In the Jewish community, after Pittsburgh there should be no synagogue, no havurah, no Hillel, no organization of any sort that holds back from Getting Out The Vote and teaching the issues that grow from millennia of Torah.

And in the other communities of ethics and of Spirit, the same. We stand together — Black churches, Muslim mosques, Sikh temples, Jewish synagogues have all been desecrated, violated. In all of them, blood has been poured into the sacred vessels.

And all of us must respond by putting every effort for one week into Growing the Vote to renew and strengthen American democracy.

Rabbi Arthur Waskow, Ph.D., D.H.L. (hon. causa), founded (1983) and directs The Shalom Center, a prophetic voice in the Jewish, multireligious, and American worlds for justice, peace, and healing of the Earth. <https://theshalomcenter.org>.  In 1963 the University of Wisconsin  conferred on him the Ph.D in US history, with a dissertation on “The 1919 Race Riots.” From 1963 to 1977 he was among the founding Fellows of the Institute for Policy Studies. After creating the original Freedom Seder in 1969, he became a leader of the movement for Jewish renewal and a transformative Judaism. From 1982 to 1989 he taught at the Reconstructionist Rabbinical College, and on occasion as a Visiting Professor at Swarthmore College, Vassar College, and Temple University.  In 2014 he received the Lifetime Achievement Award as Human Rights Hero from T’ruah: The Rabbinic Call for Human Rights. In 2015 the Forward named him one of the “most inspiring” US Rabbis. In 2017 the Reconstructionist Rabbinical College conferred on him its honorary degree of Doctor of Humane Letters. He has written  24 books — some on US foreign, military, & energy policy and on racial justice; many on religious thought & practice.   One aspect of his pioneering work on Eco-Judaism is his essay, “Jewish Environmental Ethics: Adam and Adamah,” in Oxford Handbook of Jewish Ethics (Oxford Univ. Press, 2013). He has been arrested about 26 times in protest actions for peace, racial and eco-social justice, and healing from the climate crisis.

Rabbi Arthur Waskow, Ph.D (US history with a focus on the history of racism) worked as a Congressional legislative assistant for a Member of Congress who served on the Judiciary Committee that brought Articles of Impeachment of President Nixon before the House of Representatives. He then became a “public scholar/ activist” at the Institute for Policy Studies and still later, a leader in the renewal and transformation of Jewish political, liturgical, and spiritual life. He founded and directs The Shalom Center.